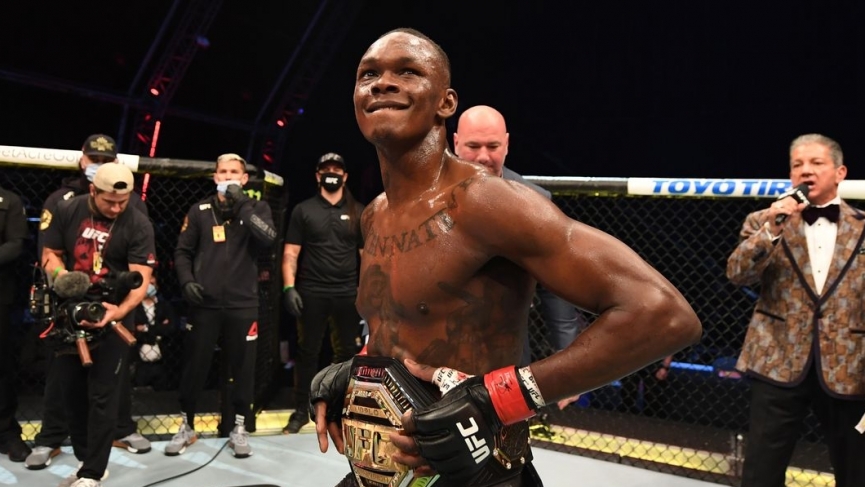 Odds.com’s UFC 253 Results and Closing Odds: UFC 253 took place on Saturday, September 27th, 2020 at the Flash Forum on Yas Island in Abu Dhabi. It was the first UFC fight card in over a month that did not have a fight removed from the card due to COVID-19. With that, fight fans were treated to a full night of action, with no walk over substitutions or short notice stand-ins. Let’s take a look at the results and closing odds for sides, totals, and props for UFC 253.

Danilo Marques took a decision as a +180 underdog in his debut UFC fight. Marques cashes with plus money across the board. +180 on the moneyline, +600 to win by decision, Over 2.5 rounds cashes at +140, and ‘Fight Goes Distance’ returns a healthy +175. It was a fight that many observes said was boring and had many fans hoping that the opening fight of the card was not a sign of things to come.

El Guapo, Juan Espino, picks up a 1st round submission via scarf choke over Jeff Hughes. Espino was a heavy -300 favorite, but his backers still managed to cash a +150 ticket on him winning by submission, as well ‘Espino Inside the Distance’ cashed at a very fair -105. The ‘Under 1.5 Rounds’ prop cashes at +140. While the ‘Under’ in the UFC Men’s Heavyweight division improves to 34-40 since 2019.

William Knight picks up the decision victory as a +126 underdog. Just as Odds.com’s Clint McLean wrote it up. Knight cashed on the ‘by Decision’ prop at +1050, and the Over 1.5 returned a fair -12. While the ‘Fight Goes Distance: Yes’ prop paid out +220.

Many believed that Knight was too slow, or had the potential to gas out in the later rounds of this fight. However, none of that came to fruition. Knight dominated much of the fight and found himself in the dominant position on multiple occasions, but fell short of getting the finish.

UFC newcomer Ľudovít Klein had an impressive KO victory over Shane Young, just 1 minute and 16 seconds into the first round. Klein executed a perfect combination of a head kick followed by a perfectly placed uppercut to end bout very quickly. The only unfortunate thing for Klein is that he missed weight, and wasn’t able to pick up a performance bonus.

Jake Matthews fought to a unanimous decision victory over Diego Sanchez, in a fight that was a real let down for the most part. Matthews picks up the win as a closing line favorite of -570, but his stock unquestionably drops after a fight in which Matthews was set up perfectly to get a finish. Matthews won the first two rounds handily, but Sanchez managed to make it interesting in the third round. Matthews ‘by Decision’ cashes at +160, while the ‘Over 2.5 Rounds’ prop cashes at a fairly priced -115, and ‘Fight Goes the Distance: Yes’ cashes on plus money at +110.

Damn that decision prop turned out to be a sweat lol

Brad Riddell (-305) remains unbeaten in the UFC, as he picked up a unanimous decision victory, in what seemed like a much closer fight than what the judges’ scorecards would show. Riddell cashes at +175 to win by decision. While the ‘Over 2.5 Rounds’ prop cashes at plus money of +114, and ‘Fight Goes the Distance’ cashes at +120.

Hakeem Dawodu (+102) picked up a needlessly close split decision over Zubaira Tukhugov. Hakeem was noticeably upset during the fight, and was screaming at Zubaira to ‘[email protected]#KING FIGHT.’ As Zubaira was seeming to be avoiding exchanges at all costs in the second and third rounds.

Thought Tuk got that one, but I’m glad it went to Dawodu. Why run in a close fight?

Dawodu cashes at a hefty +225 by decision. The ‘Over 2.5 Rounds’ prop, which was heavily juiced to the over cashed at -185, and ‘Fight Goes the Distance: Yes’ cashed at a steep price of -155. It seemed as though the oddsmakers were expecting this fight to be drawn out, but Hakeem likely would have been able to get a stoppage had Tukhugov engaged in the fight more.

Ketlen Vieira (-210) grinded out a decision victory against Sijara Eubanks, in a fight in which referee Jason Herzog gave Eubanks every opportunity to pull off an upset victory, but was unable to land anything significant on Vieira in those opportunities. On more than one occasion Herzog called for more action when the two fighters were in the clinch against the cage, and even went as far as standing up Vieira and Eubanks when Vieira was in a gained dominant position.

Brandon Royval (+191) pulls off the upset over Kai Kara-France in what was a short-lived, but epic, flyweight bout. This fight had an incredible pace and saw one of the wildest exchanges in recent memory, in the early moments of the first round. A mad scramble which saw both fighters land big shots, including a spinning elbow, and a potentially missed illegal knee.

Jan Błachowicz (+220) used his polish power to pull off the upset victory over Dominick Reyes, becoming the first UFC Light-Heavyweight Champion in the last 11 years not named ‘Jones’ or ‘Cormier’. It was a superb performance by Błachowicz, who really had total control of the bout from the very beginning, landing a huge leg kick on Reyes’ upper torso, setting the tone for the rest of the fight.

what a performance from Jan TOTAL DOMINATION #UFC253

Jan Blachowicz is a UFC champion. What? #UFC253

The ‘Last Style Bender’ Israel Adesanya (-183) put on an absolute clinic against the 13-0, undefeated contender in Paulo Costa. Adesanya, who was being labeled as a ‘boring fighter’ on the heels of his disappointing fight against Yoel Romero, proved all the doubters wrong tonight. Paulo Costa was expected to rush Adesanya and suffocate him with his renowned pressure and power, but that was not the case. Costa dared Adesanya to engage with him in the center of the octagon, but Adesanya is a far more intelligent striker to fall for Costa’s adolescent tactics. Eventually, Adesanya utilized some very powerful leg kicks on Costa’s lower calf, which slowly started to disable Costa as the fight went on.

Even after the first round, Costa seemed to be a little less energetic than what he is known for. At the same time, Adesanya’s leg kicks on Costa were paying dividends, and Costa’s movement was compromised significantly by the opening moments of the first round. Ultimately, the game plan would pay off, as Adesanya was able to land a devastating head kick, followed by a sneaky right hand to Costa’s temple which dropped the undefeated Brazillian. Adesanya capitalized on the knockdown, and referee Jason Herzog called for a stoppage of the fight immediately. Costa was on the brink of consciousness and needed to be helped to his feet after a great deal of time remaining on the canvas after the fight was stopped.

Adesanya cashes at +150 to win by ‘KO’, as well as +150 to win ‘Inside the Distance’. The ‘Under 2.5 Rounds’ prop cashes at a hefty +154. A very nice payout, considering that the majority of sharp MMA bettors were on the ‘Over’ in this fight. While ‘Fight Goes the Distance: No’ paid out at -200. With the stoppage victory, Adesanya is now 9-0 for +4.72u profit in fights with odds posted. With 4 of those 9 wins coming by way of stoppage.

Overall, it was a fantastic night of fights, and even though some fights on the card lacked high quality, there were numerous positions which provided great betting angles for MMA handicappers. Moving onto next week, and UFC Fight Island 4.