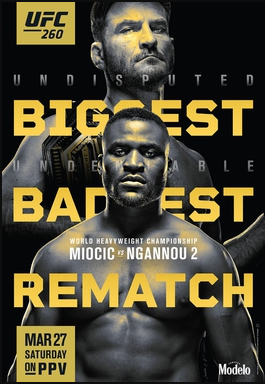 The event is headlined by UFC Heavyweight Champion Stipe Miocic, as he takes on Francis ‘the Predator’ Ngannou for the second time as champion, in a rematch from one of just two losses that Ngannou has in his UFC career.

Coming into the title fight, Miocic won 4 of his 15 UFC bouts by way of decision, going 4-11 on the ‘to win by Decision’ prop, profiting for +8.93 units along the way. Meanwhile, coming into his second chance at the heavyweight gold, Ngannou has just two UFC losses, with both of them coming by way of decision. A $100 bettor who has bet on Ngannou’s opponent ‘to Win by Decision’ in all of his UFC fights has profited +$1005 across his 12 UFC bouts, with just a 2-10 record.

The co-main event sees former UFC Welterweight champion Tyron Woodley, as he takes on the up and coming 170lbs Brazillian, Vicente ‘the Silent Assassin’ Luque. Woodley is coming off three straight losses to top-ranked welterweights, while Luque is on a heavy hot streak right now, and has never been finished in his UFC career, with 11 finishes of his own across 15 UFC bouts.

The favorite went a perfect 5-0 on the preliminary card, cashing for +2.51 units profit across the board. While the ‘Over’ cashed in 4 of 5 bouts on the prelims, going 4-1 for +1.24 units in the opening five bouts.