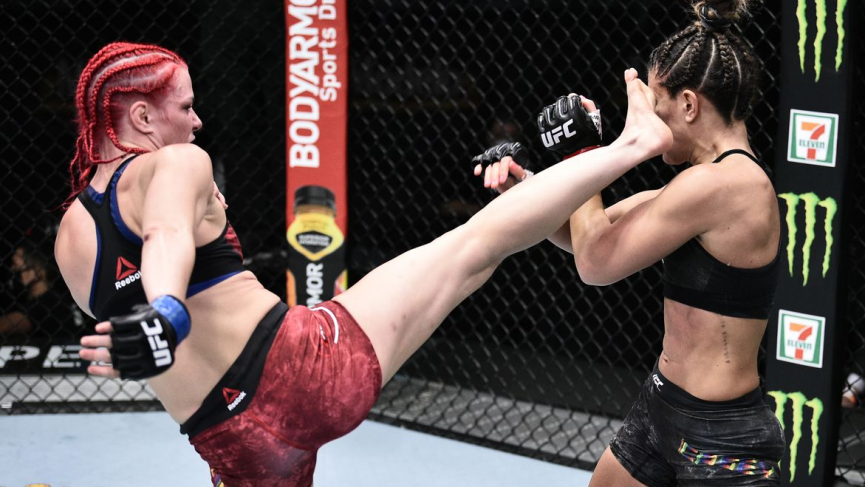 UFC Betting Trends by Division and Historical Results: MMA bettors are never one to turn away from a good fight, and we’ve had a ton of those since the start of this year, with 61 of the first 116 UFC bouts so far in 2021 going the distance. A $100 bettor who has backed the ‘Fight Goes the Distance’ prop in every fight this year has profited +$608 after nine events. An ROI of +$5.24 profit, per fight, win or lose. Meanwhile, the ‘Over’ has cashed at an even higher rate so far this year, going 73-41-2 for +7.21 units profit.

The chalk fighter has cashed at a 61.2% rate so far in 2021, but the underdog has been the value side, even at a 36.2% rate. While a profit of just +1.38 units is nothing to call home about, we have seen a number of heavy underdogs come through so far this year, which has allowed dog backers to stay afloat, even with fewer wins than losses.

Big picture handicapping pays off, even in MMA 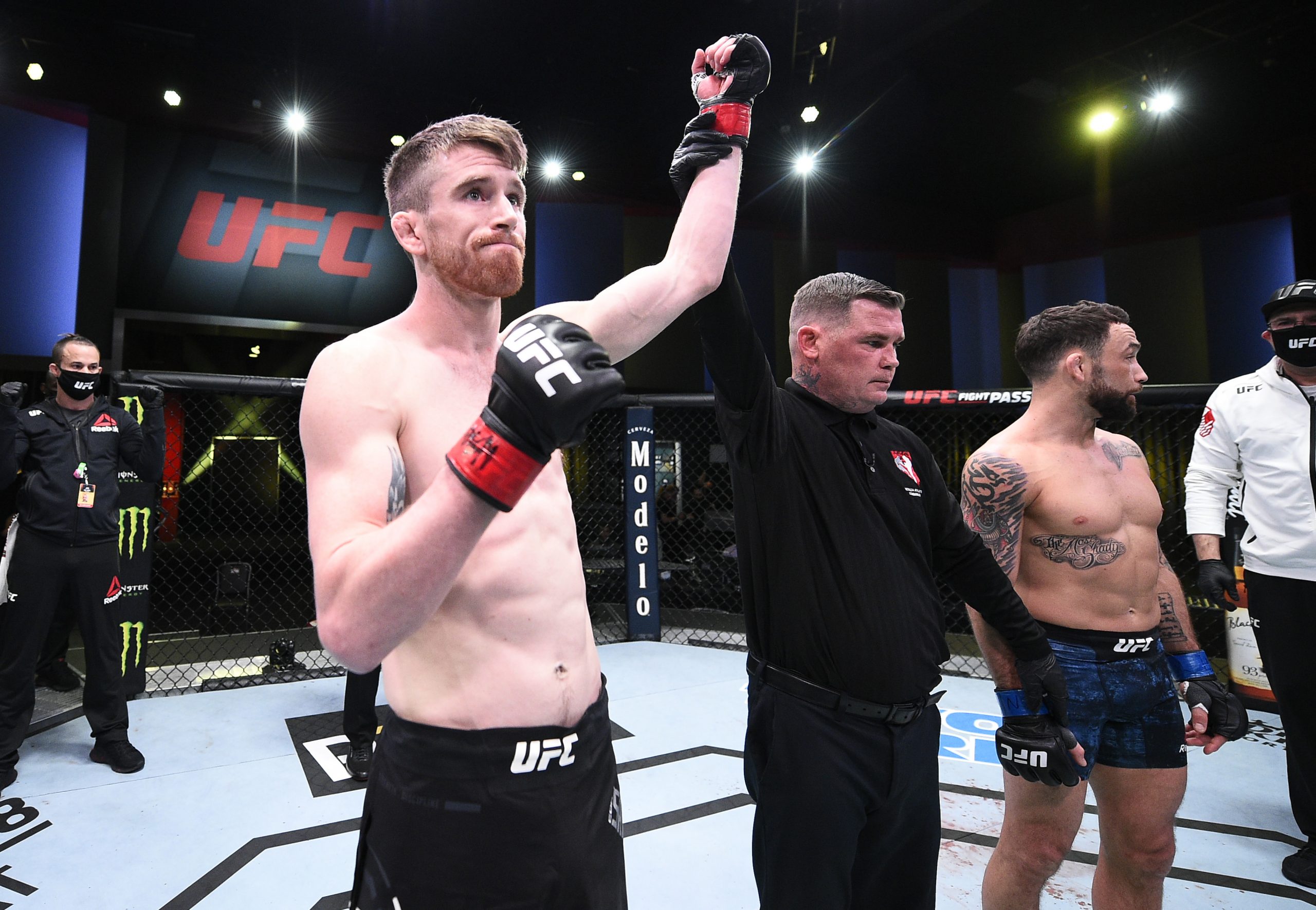 As sports bettors, we’ve come to lean on what the industry calls ‘situational handicapping.’ The home/road splits and the various ATS/ML trends that many of us have come to know and love. Some MMA bettors don’t realize that even though MMA combat is not a team sport, the same ideas of tracking trends and situational records can be just as valid in fighting predictions as it is on the field or on the court. Each division in the UFC has a set of tendencies that can be pointed out. While some of these tendencies are more explainable than others, the fact remains that they can be a valuable asset for MMA bettors when shopping for UFC odds, especially when the volume of events is as high as we’ve seen it as of late. After eight UFC events in 2021, we have seen an up-and-down roller coaster of outcomes, with some events being all chalk, and the next week being nothing but underdogs. Let’s take a look at the most profitable betting trends so far in 2021.

Certain types of fights have a particular set of likely outcomes. Whether it be the over in women’s divisions, the underdog in welterweight, or the favorite in lightweight. Sometimes, it may be a more specific market trend, such as the ‘coin flip favorite’ (-150 to -101) at men’s flyweight.

The ‘coin flip’ favorite is a chalk favorite that is lined between -15o or better. The reason this is referred to as a ‘coin flip’ is that most of the time, these fights should be lined much closer to a pick’em, but the betting market has either pushed one fighter to become a ‘short favorite’ in that -150 to just short of pick’em range.

Sometimes, you will even see the bookmakers set the odds for these kinds of bouts with one of the fighters being juiced a little bit higher than they should be, simply as a projection against the public pouring in on that fighter; since a better number on that fighter likely exists somewhere else.

If one book originates a line with a little bit of juice on the favorite as protection, many other books will outright copy that line, which is why we see a ton of fights open at around pick’em, and then hover around that ‘coin flip’ range leading up to fight night. All in all, it is important to track which side ends up winning in these ‘coin flip’ scenarios, as it is a good way to predict how the betting market values a favorite or a dog in each division.

Favorites, dogs, overs, and under, whatever it may be. There is quantifiable historical data (UFC.com Results) that we can analyze to identify these trends, isolate them, and exploit them for profits.

The UFC Women’s Strawweight division has been tough to read from a trend betting perspective, without almost every angle on the board failing to turn a profit. The favorite in the women’s 115lbs division has cashed at a 68.8% rate since January of 2019, going 40-20-1 for a marginal loss of just -0.26 units.

The favorite has dominated the UFC Men’s Flyweight division over the last 15 months, winning all but 8 bouts at 125lbs, going 27-8-1 for +7.84 units profit. Meanwhile, the ‘coin flip’ favorite has had a ton of value since January of last year, only losing 3 of the last 14 ‘coin flip fights’ in this division, profiting +5.44 units along the way. Based on the betting trends and using implied probability, a favorite in this division has value at prices as high as -300 or better.

The underdog drops to 16-24-1 over the last 15 months in the UFC Women’s Flyweight division, but still maintains a profit of +10.1 units, while the ‘Under’ dropped over the weekend to 16-25, profiting +4.02 units in this division since January of last year. Based on the betting trends, and using implied probability, any underdog, as well as any ‘Under’ at the price of +156 or better in this division is worth backing as a +EV wager.

The ‘Under’ has continued to be a cash machine in the UFC Men’s Bantamweight Division, cashing at a 51.5% rate since January of last year, going 34-32 for +13.35 units profit. Based on the betting trends, and using implied probability, the ‘Under’ at men’s 135lbs has been a +EV wager to make long-term at any at -106 or better.

The Over has been a lock in the UFC Women’s Bantamweight division over the last 15 months, cashing in every fight in this division except for one. The ‘Over’ has gone 24-1, hitting at a 96% rate for +8.69 units since January of 2020. Meanwhile, the favorite has cashed at a 68% rate over the last 15 months, but turned a profit of just +0.31 units, with a 17-8 record. Based on the betting trend, any favorite at -213 or better in this division would be a +EV long-term bet worth making.

Coming into this weekend, the ‘Over’ in the UFC Men’s Featherweight division has hit at a 71% rate since January of 2020. Based on the division betting trend, and using implied probability, any ‘Over’ in this division at the price of -245 or better, is a +EV bet worth making. Meanwhile, after last weekend, the favorite improves to 44-24-1 since last year, hitting at a 63.8% rate but is still failing to turn a profit over the last 15 months. Based on the betting trend, and using implied probability, a favorite is worth backing in this division only at the price of -176 or better, while the fade price would come in on the other side, at +176 or better.

UFC 259 may have been the bookend for the UFC Women’s Featherweight division. Amanda Nunes came in as the -1000 favorite against Megan Anderson and won the bout in just over 2 minutes, doing some in dominant fashion. With the victory, the favorited improved to 14-4 historically in the women’s 145lbs division, with the ‘Under’ going 11-7 for +4.29 units profit. If it is the end of the road for the division, there was a total of just six championship bouts in this division, with each one featuring either Cris Cyborg, or Amanda Nunes. Cyborg won and defended her title in three fights before losing in spectacular fashion to Amanda Nunes at UFC 232. Nunes then went on to defend the title once in 2020 against Felicia Spencer, and then again at UFC 259 against Megan Anderson.

After last week, the underdog has dropped to 26-38 for a 40.6% win percentage, cashing for +7.18 units since January of last year. Meanwhile, the ‘Under’ failed to cash in last Saturday’s lone lightweight bout, and now drops to 30-34, a 46.9% win percentage for +0.49 units profit over the last 15 months. Based on those betting trends, and using implied probability; any underdog at the price of +146 or better, and any ‘Under’ at the price of +113 or better, are +EV wagers worth making long term in the UFC Men’s Lightweight division.

The Over drops to 46-22 after last weekend, profiting +13.14 units profit since January of last year. The ‘Over’ has been a consistently reliable bet to make in the welterweight division, and has cashed in 95 of the last 145 bouts in this division, dating back to January of 2019. Meanwhile, the favorite has cashed at a 66.2% rate over the last 15 months, turning a marginal profit of +1.02 units.

Coming into this weekend, the ‘Under’ in the UFC Middleweight division drops to 30-26 over the last 15 months, cashing at a 53.6% rate, for +5.03 units profit since January of 2020. Based on the betting trend, implied probability has the buy price on the ‘Under’ in this division now at -116 or better. Meanwhile, after last weekend, the favorite has dropped to 38-18, for a 67.9% win rate, cashing for +0.67 units since January of last year. Based on implied probability, any favorite in this division at the price of -212 or better, is a +EV wager worth making long term.

The UFC Light Heavyweight division has been the toughest one to call from a trend betting perspective. The underdog has turned a marginal profit of +0.49 units with a 35.6% win percentage over the last 15 months, going 16-28. Meanwhile, the ‘Over’ has been almost a coin-flip, going 23-21 for a marginal loss of -1.6 units profit. Based on the betting trends, the underdog is worth a play only at the price of +181 or better, while the ‘Over’ should only be played at -110 or better, with the same rule applying to the Under.

For the latest betting odds, head over to Odds.com’s UFC Odds tracker.