NFL Will Work to Incorporate Sports Betting Into TV Deals 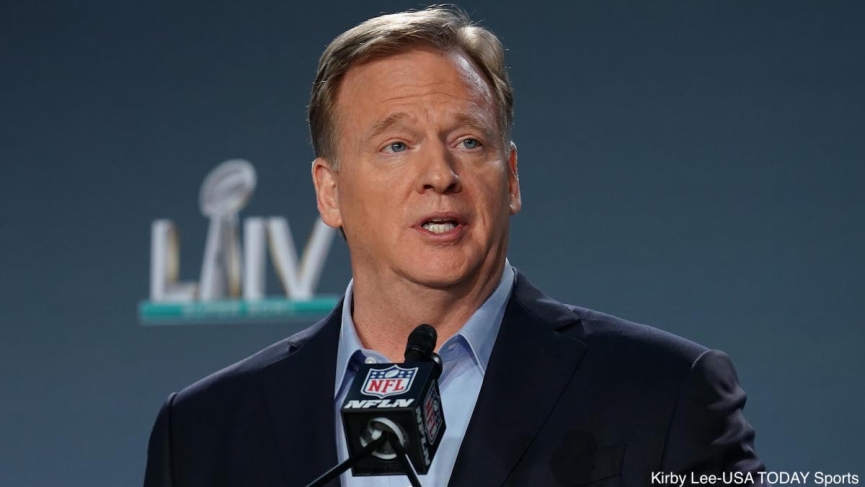 Table of Contents: | The New Deal |In Game Betting

The NFL is already the most popular sport to bet on in the U.S., and Commissioner Roger Goodell wants to take a step further. According to Albert Breer on Twitter, Goodell is looking to add sports betting to incorporate legalized sports betting into the NFL TV deals.

NFL commissioner Roger Goodell says that the league will work with the networks to incorporate legalized sports gambling into the TV deals.

For years, the NFL was avoiding gambling and its product, but with sports betting growing exponentially in popularity, the league has changed its stance on something that was still taboo a few years ago. Goodell commented on Thursday about how sports betting is becoming a valuable avenue to attract fans to the game.

“We’re going to find ways we can engage fans through legalized sports betting,” Goodell said. Well, right now, a good way to get fan engagement is through sports betting.

Under the NFL’s TV contracts, they are allowed to opt-out after seven years. If the demand in the U.S. sports betting and wagering on the most popular sport, then the NFL could look to tweak the TV deals to become more lucrative.

The NFL announced contracts with ESPN/ABC, Fox, CBS, NBC, Amazon, and NFL Network to keep NFL games on their platforms through the 2033 season. Unless there is a clause that will allow the partnerships to tweak the deals throughout the life of the contract, then the NFL will need to wait until 2028 to bring sports betting to the screen.

The NFL is going to continue to embrace sports betting as it grows across the country. Eight NFL teams have partnerships with sportsbook, including the NFL itself having some as well. The Washington Football Team does not have a sports betting partner but could offer a license to FanDuel Sportsbook thanks to Virginia sports betting laws.

More teams will form partnerships as more states legalize the industry, which is only going to build sports betting and the NFL. All major networks that televise NFL games have already formed partnerships with sportsbooks, so the process can easily happen in the coming years.

The NFL does not need to specifically have a clause for sports betting in the TV deals if the cable networks can already show odds for NFL games.

However, depending on how the sports betting industry plays out, they could go a step further with the sports betting details. Simplebet is an emerging sports betting operator looking to the micro betting market. The company focuses on creating real-time in-game bets to allow people to be on individual events like “Will the next play be a run or a pass?” or “Will the offense score a touchdown on this drive?”

That type of technology could be something the NFL will want to capitalize on if the betting market pans out the way it does.

The NFL could turn towards a company like Simplebet to create a micro-betting experience for the at-home audience during football games. Bettors could pull up the platform on the side of the TV while watching the game and post bets in real-time about what’s going to happen next in a game.

Overall, the NFL will be continuing to grow its sports betting muscle in the next couple of year, and it just depends on how they do it. Having a sports betting partner that will allow people to place bets while watching the game could be the move that puts the NFL on another level than the other U.S. sports.