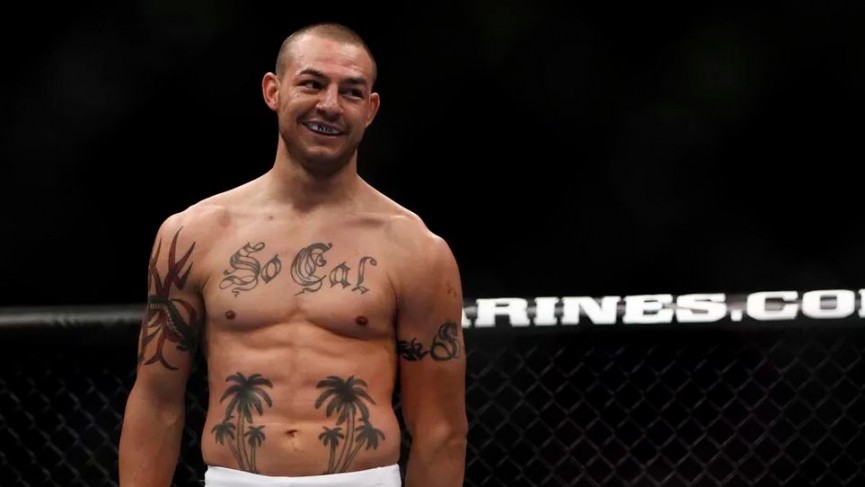 UFC 256 Picks and Underdog Best Bets: Cub Swanson has a moneyline record of 14-10 for +3.91 units profit over his 13 year professional MMA career. He is a +130 underdog to Daniel Pineda at UFC 256, and James Lynch has him circled as one of his Underdog Best Bets.

From a betting perspective, the biggest favorite on the UFC card is Cyril Gane at -425. I don’t see too much value on Junior Dos Santos as the underdog there at +335  (via WilliamHill).

Pineda (27-13) made a successful return to the Octagon in August when he knocked out Herbert Burns at UFC 252. The 35-year-old previously fought for the UFC in 2013, where he went 3-3 before being released in 2014. “The Pit” heads into this contest on a seven-fight unbeaten streak.

Swanson (26-11) hasn’t competed since an Oct. 2019 decision victory over Kron Gracie at UFC Fight Night which snapped a four-fight skid. The 37-year-old then competed in the Quintet Ultra jiu-jitsu tournament in December where he suffered a serious ACL injury which has kept him out of the cage since. The California native will be looking for back-to-back wins for the first time since April 2017.

It makes sense that Pineda is the betting favorite both with his current unbeaten streak and being more active than his opponent. However Swanson has fought far better competition, and if he’s anything close to the fighter that competed against Gracie last year, I think he can take this fight. Swanson is also at a great training camp in California getting to train with the likes of former UFC champion TJ Dillashaw, featherweight contender Brian Ortega, and current Bellator 135-pound champion Juan Archuleta. With this being close to a pick’em fight, I see plenty of value on Swanson as the +130 underdog.

Fiziev (8-1) has won four of his last five fights, including two-straight victories in the Octagon. The 27-year-old most recently defeated Marc Diakiese at UFC Fight Island 2 in July where he defeated the UK fighter by decision. Fiziev is four years younger than his opponent.

Moicano (14-3-1) snapped a two-fight losing streak in his last fight where he finished Damir Hadzovic in just 44 seconds at UFC Fight Night in March. The 31-year-old has some impressive wins on his resume including Jeremy Stephens, Calvin Kattar and Cub Swanson.

Fiziev had a great performance in his last fight but I feel like this is a case where bettors aren’t factoring in the level of competition. Both Diakiese and Alex White are borderline UFC level at this point. Whereas if you look at the recent losses for Moicano, both were against top contenders in the Korean Zombie and Jose Aldo at 145lbs. Moicano now fights at 155-pounds which I believe is a better weight class for him without the tough cut. For that reason, I see value in Moicano as the underdog and I will also be picking him here. Rafael Fiziev is 2-1 in the UFC on the moneyline, for a profit of +1.43 units.

Chase Hooper (9-1-1) is coming off his first career loss where he was absolutely dominated by Alex Caceres at UFC 250 in June on route to losing a unanimous decision. The 21-year-old is now 1-1 in the Octagon as he won his promotional debut back at UFC 245 in Dec. 2019 where he finished Daniel Teymur.

Peter Barrett (11-4) came off a tough decision loss to Youssef Zalal at UFC Vegas 6 in August. The 34-year-old is 2-2 in his last four fights and will look to avoid back-to-back losses for the second time in his career.

I get Cooper being the favorite in this fight being the younger fighter, but there is no way he should be a 4-1 favorite in the matchup. Barrett lost his debut to one of the best featherweight prospects in the UFC fight now in Zalal and proved his durability in that matchup by going all three rounds. Cooper’s last loss was far worse, looking completely outmatched on the feet and took some serious damage against Caceres at UFC 250. If this fight stays standing, I could see Barrett having a slight edge despite Cooper having both a height and reach advantage.

Even if the fight hits the canvas, Barrett only has one submission loss in 15-career fights and that was against fellow UFC featherweight TJ Brown in 2017. I see plenty of value on Barrett in this matchup and I believe he will get the upset on Saturday night. Barrett is 1-1 in the UFC, for a moneyline profit of +0.64 units.

Keep it locked to Odds.com for all of your UFC betting needs for UFC 256.