UFC 249 was a MASSIVE card full of big name value and high stakes. That is a hard act to follow and there have been some rumblings of UFC 250 not being as good as its predecessor. I am here to put an end to all that chatter! There is a TON of talent on this card both old and new.

There are several fights whose outcomes will likely decide who the future title challengers are and there are several proving ground fights where young talent is going to have to climb over existing and respected UFC fighters to make their mark. This card should have great action the entire night and it has some very compelling fight from a betting perspective.

Menifield vs Clark: The Matchup

I’ll be honest… I simply do not think highly of Devin “Brown Bear” Clark. He has the body of a 185er from the waist up and is only 205 from the hips down and that’s NOT a dick joke. Clark’s legs are built like an NFL linebacker’s and he has a massive badonk-a-donk gifting him with some seriously explosive ability.

Clark’s best ability is his wrestling and he lands roughly 3 takedowns per 15-minute fight with a 42% accuracy! If Clark can get you down and grind on you that’s his main path to victory, but he is just 5-4 in the UFC and all 4 of his losses have come by finish.

When Clark is not able to break his opponents he pays for it dearly and the level of competition he has faced so far shows that he is only beating the bottom tier of UFC fighters, some of whom are no longer with the organization.

This fight feels like a measuring stick and the UFC is attempting to get prospect Alonzo Menifield some experience against an opponent who isn’t very dangerous. Menifield is extremely physically powerful and even though he is raw from a fighting technique standpoint he is a shiny 9-0 undefeated because nobody has been able to take that raw power.

All 9 of Menifield’s finishes are in R1 or inside the first minute of R2. The concern is if Devin Clark will be able to extend Menifield with his wrestling will Menifield break in the later rounds when all that muscle fills with blood and he has a harder time swinging those haymakers.

Menifield is training under coach Sayif Saud who is one of the hottest coaches in MMA today and I am expecting Menifield to bloom into a true UFC fighter where Devin Clark I think has already topped out. I am not a huge fan of the line since Alonzo is still unproven, but the side is definitely Menifield in my opinion. I wouldn’t lay the -222 on him however, I would look for him by knockout to find a better line. Props are not out yet, but I think Alonzo wins this the same as ever, by KO.

Byrd vs Pitlo: The Matchup

This fight is particularly intriguing to me because Maki Pitolo is the infamous Coconut Bombz from Dana White’s Contender Series and he is such a fun prospect the UFC is TRYING to get him a win. Charles Byrd on the other hand is a 36-year-old who seems to be struggling at the UFC level but has all the pieces of a solid fighter and ran headlong into the deep end of the division.

Maki has serious power in his hands, but is a brawler and has been KO’d and submitted twice each because he puts it all on the line every fight. Maki has fast heavy hands and can find his opponents back quickly on the mat for rear-naked chokes. The downside to Maki is he tends to overextend and can be taken down and controlled and that’s EXACTLY what Byrd is good at.

Byrd is training at the up and coming Fortis MMA and is a physically explosive grinder. Byrd averages 2.5 takedowns per 15 minute fight with a 50% accuracy rate and his timing on his takedowns is impeccable. Prior to being KO’d by The Dentist in September 2018 he was doing quite well against Stewart and looked like he was on his way to winning the fight.

We all know that Darren Stewart has SERIOUS power and getting caught by him isn’t much of a mark against you. After Stewart, Byrd was given Edmen Shahbazyan who is the hottest prospect at 185 and he was KOd in 38 seconds. This is a MASSIVE step down in competition for Byrd and a very favorable matchup. Maki is going to have to come straight if he hopes to win this fight and he is going to have to land some of those Coconut Bombz. I don’t know that Maki will be able to do that and I believe that the wrestling of Byrd is going to allow him to grind out another dangerous striker.

Caseres vs Hooper: The Matchup

Chase Hooper is the new kid on the block and immediately made waves by being funny and extremely likable. In his first UFC fight, Hooper defeated Teymur who is a well-rounded fighter and an excellent first test at the highest level that I actually expected him to fail. 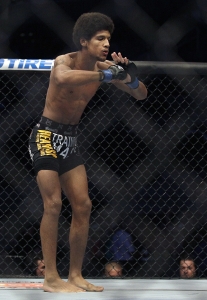 Hooper is extremely limited on the feet, but appears to be a wizard on the ground and somehow has serious ground and pound!! It’s like as soon as he is on the mat he figures out how to use that impressive reach and can lay a beat down on his opponents.

This is going to be a striker vs grappler match and an excellent test of how improved Hooper is. Alex “Bruce Leeroy” Caceres is serviceable on the mat and is a pretty slick striker with a ton of UFC experience. The issue with Caceres is that he is very nearly a 0.500 fighter and manages to give fights away.

The most significant stat in this fight is that Caceres has 7 losses coming by way of submission so even though he is serviceable he has a clear weakness when facing higher level grapplers and that is exactly what Chase is. I always look to be on the side of the UFC and this seems like a fight where they are looking to get Hooper a win against a notable name to build his star.

There is a CLEAR path to victory for Hooper and with Caceres having just a 58% takedown defense rate I expect Chase to get the fight to the mat and probably lock up another finish. I can only look to that side because Caceres has to keep the fight on the feet for a full 15 minutes and I simply can’t trust him to do that.