Before we start with Poirier vs Hooker predictions, let’s address the fact that unfortunately, I can’t report how well we did on Blaydes vs Volkov because I am writing this article prior to the fights taking place on Saturday 6/20. So I’ll just assume that we crushed it!! We continue our wild streak of MMA events with a banger when Dustin “The Diamond” Poirier faces young gun Dan “The Hangman” Hooker Saturday 6/27/2020 in a battle of possible future title contender’s at 155. Let’s look at some of the interesting spots on the undercard where we might be able to make some cash!

Pena vs Worthy: The Matchup

“Violent Bob Ross” Luis Pena was a member of The Ultimate Fighter and was sidelined early with an injury. He was an early favorite to win the entire season, but was unable to compete and had to watch Michael Trizano take the whole show. Pena was such a hot prospect that Dana White gave him a UFC contract anyway and he won his UFC debut by submitting Richie Smullen in the first round and calling for a fight with TUF winner Trizano.

Trizano has been nothing but impressive in the UFC so far and was able to squeeze a split decision win from Pena. Since that loss, Pena has been impressive. At 6’3 Pena towers over most of his opponents and enjoys a nice reach advantage. Pena has been able to get by but has been facing a relatively low level of opposition so far in the UFC. 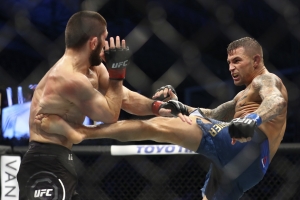 He has decent grappling and when on top has solid ground and pound, but his striking on the feet isn’t something I am overly impressed with. He generally outlands his opponents, but doesn’t have that pop on his punches to truly damage them. This weekend Pena faces Khama Worthy who is a man used to being counted out and used to playing spoiler. Worthy has had a bit of a tough time getting to the UFC as every time it seemed like he was close he would drop a fight.

Worthy has been KOd 5 times which is not a good sign, but all 5 have come from UFC caliber opposition. In Worthy’s UFC debut he had to face Devonte Smith who was a friend and former training partner of his and KOd him in the very first round. Worthy cashed that night as a massive +650 underdog putting his big power on notice. This is a dog who can match the size and reach of Pena and is once again being looked past. I haven’t moved in on this one yet, but I feel like Worthy might be able to land a bomb if Pena is unable to get the fight to the mat. I don’t know that we want to count out Worthy here. It may be a dog or pass situation.

Betting Trends for Fighters Coming Off a Loss

Woodson vs Nelson: The Matchup

Sean Woodson is another one of these giant prospects and I do mean giant. At 145 he is massively tall and has a huge reach advantage over most of his opponents. Coming into the UFC undefeated Woodson is already a threat. Woodson has a 46-3 amateur boxing record before deciding to move to MMA rather than proceed with a boxing career and brings some impressive hands to the cage.

He is able to use that insane 78-inch reach and keep his opponents at range while switching stances and throwing feints to keep them uncomfortable. Woodsen has a sneaky knee that he can throw right up the middle when his opponents try to get in on takedowns and because of how tall he is he can clip them right in the chin. The weakness I see in Woodson’s game is his grappling and that is where Kyle “The Monster” Nelson is going to need to get this fight to win it in my opinion.

Kyle has had a bit of a rough run in the UFC so far. In his UFC debut Kyle was thrown to the wolves against Diego Ferreira on short notice and then was out-worked by Matt Sayles. Kyle has solid offensive grappling and loves to bully his opponents against the face. He has a good leg hook to drag his foes to the floor where he can unload with ground and pound.

On the feet “The Monster” has some serious pop on his punches, but he does have a bad habit of gassing later in fights especially when grappling is involved. He has a skill set to test Woodsen but I don’t count him out here. At this point, there aren’t totals out yet, but we might want to look closer at the over/under when it drops than we do a side. With the power Kyle brings and his tendency to gas we might be able to get a good under.