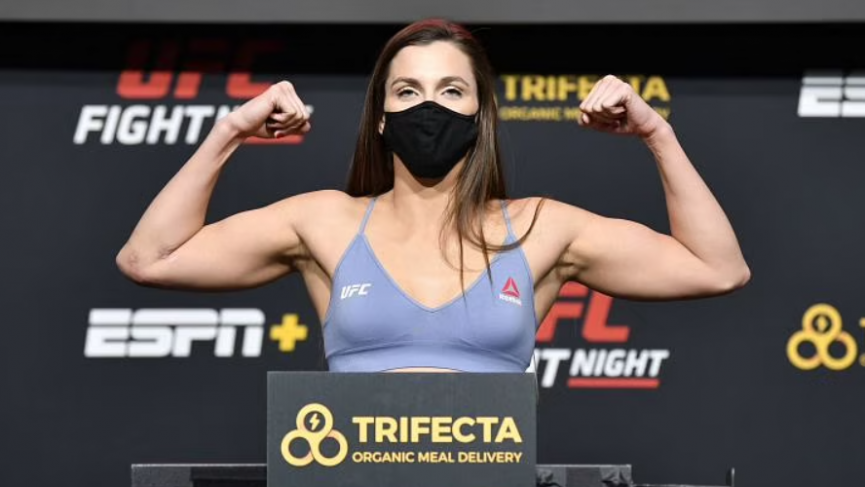 Montana De La Rosa vs Mayra Bueno Silva Pick: UFC Vegas 20 Predictions: The women in the UFC are just getting better and better. It has been a wild ride to watch the rise of Rousey and the women’s divisions getting introduced to the UFC  and now seeing the promising crops of young talent reaching the levels where they are challenging the best stars the UFCs men have to offer and even passing them for exciting fights and finishes. Saturday, we have several women’s fights, and this is a good one.

The Fighters: Rosa vs Bueno Silva

Montana De La Rosa is a fighter who is trying to find her footing in the UFC. A strong grappler with a vast need for improvement in her striking, she has so far had an up and down career in the UFC. De La Rosa appears to have the raw talent to make it up a level in the UFC, but she has been sent back down the ladder every time she has attempted that ascent every time she has tried that ascent. A recent move to Elevation Fight Team and breaking away from her smaller gym is just what the doctor ordered, and I expect her to show some real improvements.

Mayra Bueno Silva is a woman the UFC has had their eye on for some time. Bueno Silva made her step up to Dana White’s Contender Series after just four professional fights and was impressed with a first-round submission earning her a roster spot. Since then, Silva has had three fights with two wins by submission and 1 by decision. Silva is similar to De La Rosa in that she is a high-level ground fighter, and her striking is a work in progress, but Mayra comes equipped with BJJ rather than wrestling. It will be an interesting clash of styles.

The Match-Up: Rosa vs Bueno Silva

This Women’s Flyweight bout is lined with extremely tight odds, and for a good reason. Both women are excellent grapplers, and the majority of their wins come by submission. Mayra Bueno Silva has a strong kicking attack on the feet where she likes to attack her opponent’s body and legs as Montana has shown a massive improvement in her boxing her last time out and prefers to do her work with her hands. Whenever we see two similarly skilled fighters, we sometimes see a fight take place in the realm where both feel they have the advantage over their opponents. In this case, I could see this fight turning into a striking battle since neither would like to tempt the grappling of the other.

Generally speaking, when you take a solid BJJ player against a good wrestler, I have to side with the wrestler. The wrestler is in the top position, which is eye candy to the UFC’s judges, and they control their opponent. As long as Montana De La Rosa’s submission defense is on the point, she should be able to steal rounds and minutes of this fight in a dominant ground position as the stronger wrestler of the two. The only woman who has been able to submit De La Rosa to this point was Mackenzie Dern and she is an extremely high-level BJJ player, so I have no concerns with De La Rosa’s grappling.

UFC Vegas 20 Best Bet – Montana De La Rosa +125 (UFC Odds via Bet365): On the Feet, Montana will enjoy a 2-inch reach advantage, and given her boxing is her go-to offense, that will serve her well. Another skill that Montana has shown is the ability to catch kicks and transition those to takedowns. Silva’s offense will play right into the hands of Montana de La rosa allowing her additional chances to score with the judges. The only advantage I see for Silva is the pure BJJ and as long as Montana doesn’t make a mistake I believe she has a stylistic advantage almost everywhere and the wrong fighter is favored. With Montana’s recent move to Elevation Fight Team, I would expect a new better version of her for this fight and I am willing to back her at a dog price.