UFC Vegas 3 or UFC Fight Night Blaydes vs Volkov has some serious matchups, and it should be a phenomenal night of fights. One fight that caught my eye was Josh Emmett vs Shane Burgos. Looking at the lines, these fights should be closely contested battles and there are lots of “pick-em” prices. With that in mind, we have to find bets that we like, but we also have to understand there is danger coming the other way. The bookie doesn’t give out free money often. With that in mind let’s take a look at this week’s best bet!

Shane Burgos has only 1 loss in his UFC career and is an impressive young gun who we all expect a lot out of. Josh Emmett is a hard-hitting fighter who has built a reputation for destruction and serious power. This fight is 100% going to be straight fireworks from start to finish and I have a hard time believing it goes to the cards.

Emmett vs Burgos: The Fighters

Emmett vs Burgos: The Angle

Normally I try to do multiple bets for the “best bets” article, but Saturday night I have only one that I really like. I covered the other bets I like in the underdogs’ article earlier this week, and could have used this one for it, but decided to save it instead. If you missed my other big dog play earlier in the week then check it out here:

This is a huge fight between 145-pound prospects. The stakes are high and both men are streaking. Josh Emmett has scored at least 1 knockdown in 5 straight UFC fights, and he really seems to be coming into his own going 4-1 in his last 5 with 3 of his 4 wins coming by way of devastating KO. Shane Burgos has rebounded impressively from his loss to Calvin Kattar with a 3 fight win streak of his own. Two of those three fights coming by finish. Emmett is an Alpha Male product and has a solid wrestling base to back up his crazy power on the feet. Shane Burgos is a fantastic boxer with an impressive work rate landing over 7 significant strikes per minute on average and will enjoy a 5-inch reach advantage in this fight. 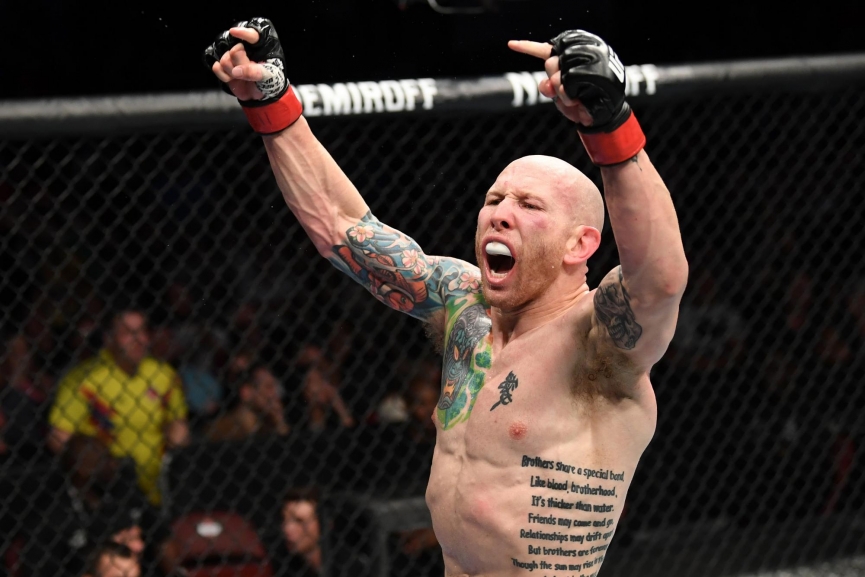 You might be wondering where the edge is in this fight after all these points. Well, the key to this fight is Josh Emmett’s right hand. You may be rolling your eyes and saying that you already know about Emmett’s powerbomb. Don’t worry I’m not wasting your time! What you may not have realized is that Shane Burgos has yet to figure out how to defend the right hand. In his last 4 fights, he has been seriously hurt or put down by his opponent’s right hand. When Burgos faced Calvin Kattar he was pounded repeatedly with that right hand until he finally succumbed to it in the 3rd round.

In the fight against Kurt Holobaugh, he was dropped by the right hand and it was only in the ground scramble that he found his path to victory by decision, but he was nearly finished. In the Cub Swanson fight, they traded over 100 significant strikes each and many of those were rights from Swanson. Finally, against Makwan Amirkhani, Burgos was caught with right hands while hunting the finish in the 3rd round and anybody with more pop would have turned the tables on him.

Josh Emmett can absolutely strike with Burgos, he can grapple with Burgos, and he has far more than a “puncher’s chance” when his best punch is the kryptonite of his opponent. Not only that, but Josh Emmett has unreal power at 145 and carries it all the way into the deep end of round 3. I think Emmett looks to counter and with that offensive output of Burgos he will find his opening and put Shane down with that brutal rocket launcher he calls a right arm.