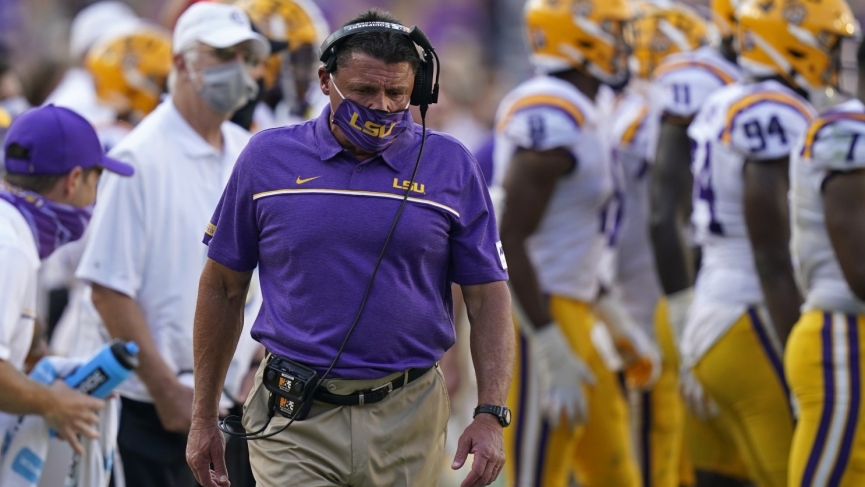 Odds.com’s LSU vs Vanderbilt Pick for College Football Week 5: With both teams coming off season-opening losses, this week’s collision in Nashville between Vanderbilt and LSU could be an SEC elimination game.

Losing your season opener after winning a National Championship always brings out the doomsday prognosticators in large numbers. Just ask Ed Orgeron who has been listening to talk show hosts and their callers suggesting last year was a fluke and the LSU Tigers are in for a huge letdown this time around.

Orgeron and the Tigers have a great chance for quick redemption this Saturday when they travel to Nashville to take on the Vanderbilt Commodores, themselves a loser last week though they showed they might be better than initially advertised. The SEC Network will carry the 7:30 p.m. (ET) kickoff at Vanderbilt Stadium, and LSU is a pronounced favorite at Bet365 where the Tigers are laying 21. The 49½-point total is among the lowest on the Week 5 card.

It wasn’t just that LSU won the College Football Playoffs last year, it was how they ran roughshod over all comers. The same was true in reverse last week at home against Mississippi State: It’s not just that the Tigers lost to the Bulldogs, but how they squandered a third-quarter lead in the 44-34 setback as 2-TD chalk on the NCAA football odds.

It’s also how Mississippi State’s KJ Costello shredded the LSU defense for an SEC-record 623 yards passing. Costello completed 36-of-60 attempts, five of those completions going for touchdowns. If not for turning it over four times, the Bulldogs could’ve scored 70. The Tigers did hold MSU to just nine yards rushing, for what that’s worth. Missing in the defensive backfield was Derek Stingley, Jr., who was held out due to a mysterious illness that sent him to the hospital and was not COVID-19 related. Stingley should be back this week.

Trying to replace a legend like Joe Burrow is never easy, and Myles Brennan didn’t do too bad in the loss. The junior passed for 345 yards and three scores but also threw two interceptions, both picks followed by Bulldog drives for touchdowns. The ground game sure missed Clyde Edwards-Helaire, who’s now toiling for the Kansas City Chiefs. It remains to be seen if Chris Curry or Tyrion Davis-Price can fill those shoes.

While Vanderbilt might have lost last week at Texas A&M, the Commodores made it a much closer game than the 30-point spread. They kept the game close from start to finish and proved there is some hope for the defense in a 17-12 defeat that never even sniffed a 46½-point total.

A couple of long runs were their undoing in the end. While the defense only managed one sack on the evening in front of nearly 25,000 Aggies, they still harassed A&M quarterback Kellen Mond the entire game and had the O-Line unsettled. Dayo Odeyingbo was a force from his end position, putting constant pressure on Mond, and safety Deshaun Jerkins was solid in both pass defense and run support.

Vanderbilt’s offense? Well, that was another story. True freshman Ken Seals looked very good at times in his collegiate debut, completing 20-of-29 attempts for 150 yards. He appears to already have developed a nice relationship with sophomore wideout Amir Abdur-Rahman, who hauled in five catches including a touchdown. This is still a young O-line, however, and the jury is out on whether the Commodores can find a reliable tailback.

Tigers Geauxing For 9th-Straight In Rivalry

For a couple of teams who have been in the same conference since 1933, the Tigers and Commodores sure don’t get together very often. Last year’s matchup, also in Nashville, was their first meeting since 2010, that game played in Music City as well. This contest is just the 32nd between the schools, and only the sixth this millennium, with LSU owning a 23-7 lead in the series, one other game ending in a knot.

Burrow and the Tigers poured it on Vanderbilt a year ago, running up a 66-38 result. The clash closed with LSU giving up 24½, and the Tigers went over the 62½-point total on their own. You have to go back to 1990 to find the Commodores’ last win over LSU, the Tigers winning all eight contests since then.

Like weather across much of the country, it should be a nice weekend in Nashville. The current forecast calls for clear skies with the thermometer in the low-60s at kickoff, and no wind to speak of. My crystal ball keeps showing a 40-17 final in LSU’s favor, and that makes it an easy college football pick on the ‘over.’