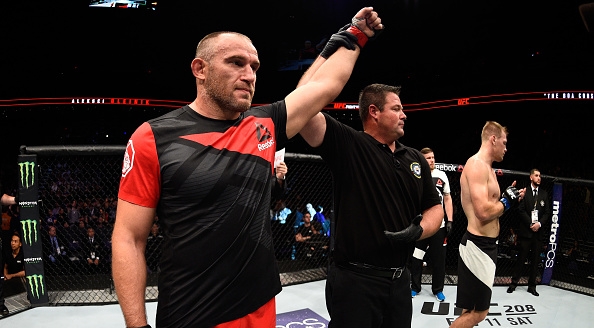 Daukaus (10-3) looks to extend his winning streak to four in a row when he battles Oleinik on the main card. The 31-year-old was signed to the UFC last year and has picked up two-straight victories in the Octagon, including a 45-second TKO win over Rodrigo Nascimento at UFC Fight Night in October.

Alexey Oleinik (59-14-1) is currently the #10 ranked fighter in the UFC Heavyweight division and is coming off a second-round TKO loss to Derrick Lewis at UFC Fight Night in August, which snapped a two-fight win streak. The 43-year-old has been finished in three of his last five fights.

Daukaus is the rightful favorite here being the younger, faster fighter in this matchup. However, you can’t ignore the superior ground game of Oleinik which is why I do see value on the American Top Team product at +155. Oleinik boasts 46-career wins by submission and also has a clear edge in experience having 74-career fights compared to just 13 for Daukaus. I’ll still be siding with Daukaus on my pick, because I think it’s likely he’ll knock out the “The Boa Constrictor” however Oleinik is absolutely a live dog in the matchup, especially if he can get this fight to the ground.

Shana Dobson comes in as the +125 underdog to UFC debutant Casey O’Neill. Dobson is coming off one of the biggest upsets in recent memory in 2020, cashing as a +770 long shot against Mariya Agapova.