Now things are starting to heat up!! We have just one week until our first taste of Fight Island folks! Kicking off our insane 3 fight run we have UFC 251 and then Wednesday 7/15 we are treated to some mid-week violence when Featherweight standouts Clavin Kattar and Dan Ige clash in a phenomenal free card before back to Saturday for yet another night of war! We have already broken down the entire main card of UFC 251 and now our focus shifts to UFC Fight Night 172 Kattar vs Ige predictions. Let’s take a look at this juicy undercard.

This will be Tim Elliot’s 3rd fight in 2020 and he has not fared well so far this year. Elliot is 1 – 4 in his last 5 fights with 3 of those losses coming by finish. We do need to consider for a moment that Elliot has been facing a very who’s who of the Flyweight division recently in the uncrowned king Deiveson Figueiredo, fellow grappling wizard Askar Askarov, and young hungry prospect Brandon Royval who appears to have a slick ground game himself.

Elliott vs Benoit: The Matchup

Tim Elliot’s bread and butter is on the mat and when he faces a foe who is able to out-work him on the mat he just doesn’t have much to offer. Ryan Benoit is a fighter who came into the UFC with a lot of hype and has alternated wins and losses for some time. If history tells us anything he is going to win this fight just based on the pattern of his UFC career. After catching Sergio Pettis with a bomb in his 2nd UFC fight we expected big things from Benoit, but he just hasn’t been able to deliver.

My real issue with Benoit is how closely he fights with his opponents. 3 of Benoit’s last 4 fights have been split decisions so regardless of who he is fighting you aren’t safe unless he finishes. Both of these fighters are rather unreliable at this stage and it is pretty clear that Elliot is on the decline, but he still has his areas where he is effective. Benoit’s clear path to victory here is a knockout but that’s easier said than done.

Elliot is something of a zombie and the amount of punishment he can absorb and keep walking forward is unreal. If you can’t make him submit you probably aren’t going to beat him. Benoit’s biggest weakness in MMA is his grappling game and while it is something he has been working on he was slated to face Tyson Nam who was going to bang with him on the feet and he likely isn’t all that sharp in that area right now with this short turn around.

Ellio averages 4.31 takedowns per 15 minutes and lands with a 55% accuracy. When you look at Benoit’s UFC career the fights he tends to lose are the ones where he struggles with the grappling and he only has a 64% takedown defense rating. Elliot’s chain grappling attack will be an issue for him and without the submission offense needed I don’t know that this is a good matchup for Ryan. The right move is probably a pass, but if I am betting I will take this buy low spot on Elliot as scary as that sounds.

This woman’s fight is going to be absolute fight works. Molly “Meatball” Mccann is a heavily underrated prospect in the women’s Flyweight division. She had a rough start getting submitted by my personal dark horse Gillian Robertson and was immediately counted out, but has low key gone 1-9 in her last 10 and is currently riding a 3 fight win streak. With 4 full fights of UFC experience, Molly is welcoming impressive newcomer Taila Santos who received the UFC call after a win on Dana White’s Contender Series Brazil.

McCann vs Santos: The Matchup

In Taila’s first UFC fight she went life and death with Mara Romero Borella and worked her way to a split decision loss with a fighter who is 1-4 in her last 5 and is likely cut from the UFC at this stage. Taila is a slick striker whose father is her muay Thai coach and she is a blue belt in BJJ. In this fight, she will be enjoying a 6-inch reach advantage and that will be a huge factor. 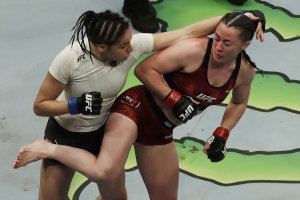 Taila’s striking is surprisingly basic but it just seems to work. She utilizes her long jab to keep her foes at range and then hammers them with big leg kicks. Molly Meatball is more of a well rounded martial artist and can mix in level changes and on the mat her ground and pound is fierce. Molly is one of those fighters who bites down on her mouthpiece and simply never gives up.

If she plays the game with Santos then her legs are going to get chewed up and she might even get TKO’d however I believe Molly is a brawl specialist and I think she makes this fight dirty. If Molly can mix in the takedowns and press Santos against the fence as well as keeping the striking in boxing range then I think Molly stands a very good chance to run away with this one and I do favor her here. This is another very close fight, but I will side with the woman who has legit UFC experience against the newcomer who got here by KOing 0-10 fighters on the regional scene.