After the night that will be UFC 251 coming down is going to be difficult. Luckily the UFC has put together a little after-dinner mint of a UFC card in UFC Fight Night 172. This is one of those cards I am always talking about. You may not recognize many of the names on this card, but what you will recognize is the skill and violence. Taking a look at Kattar vs. Ige predictions for Wednesday’s card is definitely one of those fights that will become unforgettable.

This is going to be a fun night of fights and will definitely keep that high through until Saturday again and it’s topped off with an absolute banger between two of the best at Featherweight. Both Kattar and Ige are working their way into title contention and this is a fight that could decide one of your near future contenders and potential champions.

Both men are on quick turnarounds. Kattar last fought against Jeremy Stephens and Ige last fought Barboza just one week apart from one another. These two are on a collision course and it was fate that as they reached the top of the mountain they would run into one another. Kattar has been the dark horse of Featherweight for a few years now and I believe he will fight for the title one day where Ige is doing his best Gilbert Burns impression and came out of nowhere to find himself rapidly in contention.

They call him The Boston Finisher and Calvin is really starting to live up to that name. Kattar came into the UFC and looked like he might be a bit of a decision machine, but he has turned that around in a hurry, and now he is really coming into his own. Kattar’s boxing is his weapon of choice and he has a really long and stiff jab which he intelligently works behind. Kattar mixes in leg kicks and attacks in combination, always ripping to the bodies of his opponents making damage for the later rounds and sucking at their gas tank.

Kattar is 3-2 in his last 5 but he has only lost by decision to contenders Renato Moicano and Zabit Magomedsharipov and in the fight with Zabit, Katter would have finished him if he had one more round to work. The Boston Finisher has high fight IQ, uses his footwork well to circle and cut angles, great head movement, and is incredibly durable. Katter has everything you are looking for in a prospect and I am expecting a lot from him in the future.

Dan Ige has taken the hard road to the top with his last several fights being hard-fought victories. We have cashed with Dan Ige a lot recently as an underdog and it makes you wonder what he is going to have to do to get the bookie’s respect because he has repeatedly crushed it as an underdog and fully intends to do the same thing at Fight Island. Ige has great boxing and is a high-level grappler himself, so don’t expect him to back down from standing toe to toe with Kattar.

Similarly to when Poirier fought Hooker this fight simply will not disappoint. Both of these men find themselves in action packed, Fight of the Night type of battles on a regular basis. In fact, that’s where Dan Ige got his 50k nickname. Calvin Kattar averages 5.29 significant strikes landed per minute while Ige puts up 4.12 per minute himself.

Both of these men are proficient at boxing and I fully expect them to keep this fight on the feet and go at it until one of them falls. Kattar is going to be a decent amount larger than Ige, but he will only have a 1-inch reach advantage. Ige will have a wrestling edge, but Kattar has a high-level takedown defense (77%) and has a phenomenal getup game, so even if you do get him on the mat do not expect him to stay there.

Ige is a fast starter and Kattar has been criticized for being a slow starter in the past. In fact, Katter’s slow start against Zabit is what many believe, myself included, cost him the fight that night. This is a 5 round main event however, so Kattar pacing himself may actually come in handy when there is a possible extra 10 minutes on this one. With the heat that these two throw with I don’t know that we will be needing the championship rounds, but we have to at least recognize the possibility of the fight going later.

The biggest key for me in this fight is the quick turnaround. BUT CLINT!!! You just said they both fought at the same time this year! How can that be a factor?? 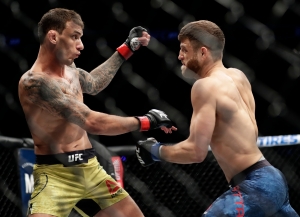 Well, I’m glad you asked! Dan Ige fought Edson Barboza and squeezed out a split decision win. I rewatched that fight today and I originally thought we had gotten away with one and the judges had gifted us an undeserving win that night, but upon second viewing I actually think they got it right and Ige did just enough to win.

What really stood out to me about that fight this time however was the amount of damage that Dan Ige took. Calvin Kattar fought Jeremy Stephens and absorbed 57 significant strikes that night before ending Stephens with one of the biggest Hellbows I’ve ever seen in round 2. Ige on the other hand absorbed 80 significant strikes from one of the biggest power strikes from a division above him, was dropped in round 1, and nearly collapsed in round 2.

If not for the wrestling weakness of Edson Barboza I believe he would have finished Ige that night. This quick turnaround is simply not enough time to heal and Kalvin has much less damage to come back from and deals much more punishment than Ige. I do not mean that disparagingly. Ige’s boxing is sharp and he hits hard also, but Kattar is on another level in my opinion when it comes to raw power. I am playing Kattar and I believe he makes a perfect parlay piece. Considering they have more than the usual 3 rounds to work I would also be very interested in Kattar by KO when the props come out.