This Saturday we are going to get a scary UFC fight night. This is a significantly lower level of MMA overall than we have been used to since the UFC returned and what that tends to mean is more variance. This is an extremely chalky card with lots of decent sized favorites, but that means we likely have wide lines and juicy dogs on the other side! This card has one fight I’ve had circled for some time and I finally get to pull the trigger on one of my favorite UFC underdogs.

Andre “Touchy” Fili is an Alpha Male product who has had an up and down UFC run. He has an extremely high ceiling but struggles to put it all together. On his best night, he can hang with the UFC’s top contenders at 145 such as Sodiq Yusuff and on his worst night, he’s losing a decision to Michael Johnson or winning an uninspired close fight against Artem Lobov. Charles Jourdain is the new kid on the block and he just derailed the Korean Super Boy hype train in his last fight and gets a big step up here. Can he pull off another upset?

Andre Fili has been around for a long time. He’s one of these fighters who we have watched grow up in front of our eyes and he has been figuring things out at the highest level. For being only 29 years old and just getting into his prime Fili has a surprising amount of experience with 27 fights and he has been in the UFC for 7 years!

Fili struggled in his early career dropping fights to fellow rising contenders like Max Holloway, Yair Rodriguez, and Calvin Kattar. Looking back those names have aged extremely well and there is no shame in losing to them. Recently it seems like Fili has been putting it altogether more and he looked very impressive in his fight against Sodiq Yusuff back in January even though he lost a decision. Fili tends to rely on his power and is willing to trade with his foes leading to back and forth brawls and that’s exactly where Jourdain shines.

Charles “Air” Jourdain is a technical brawler and he thrives in the madness. Jourdain is incredibly aggressive and he attacks with heavy damaging leg and body kicks. He finds his opponent’s range and timing quickly in fights and once he does unleashes massive power hooks that can end the night of anybody at 145.

Jourdain will close the range blitzing with straight shots splitting his opponent’s guard and rips the body every chance he gets. This will only be Jourdain’s 3rd UFC fight but he is already knocking on the door of title contention with a win.

Charles utilizes 2 of my favorite strategies in combination in nearly every one of his fights. He constantly finds a home for vicious kicks to the legs and body and he fires devastating short hooks to the ribs every chance he gets. When you beat up your opponent’s legs you make it hard to do anything. They move slower. Their takedowns are less effective. They cannot plant to land big power shots.

Our Pick for Eye vs Calvillo UFC Fight Night 177

Possibly the best example of this strategy is Justin Gaethje who has used this strategy his entire UFC career and even when his opponents know it’s coming its damn near impossible to stop. When you work the body of your opponents you wear them down. You drain their gas tank. You are banking damage for the later rounds. When Charles gets deep into round 2 his opponents are damaged, tired, and broken when he is fresh and looks for the kill. Yea he has fight IQ covered.

Jourdain has faced 2 opponents so far in his UFC career in Desmond Green and Dooho Choi and survived both without much issue. Desmond was able to use his superior grappling and grind out the dangerous Jourdain in a 15-minute fight that I think Jourdain wins if rematched. Charles took that fight on short notice and stepping up under the bright UFC lights for the first time always causes problems. Against Choi however, Jourdain ate everything the Korean Superboy had to offer and ended up crushing Choi in the second round. Choi relied on his power striking having won 11 of his 14 wins by KO yet Jourdain ate some of those big shots and kept coming.

Back to the Demond Green fight for a moment. We saw Jourdain step up late notice and have a powerful fighter with years more of high level experience grinding on him and never once did he stop trying to get back to his feet and finish the fight. Jourdain actually increased his offensive output in round 3 in an attempt to get back into that fight after giving up 3 takedowns in that round alone. Jourdain will never stop and never quit and we have yet to see signs of him breaking.

Is this one I have to go into? Remember that we define power as fight finishing ability and not simply punching power. The ability to stop a fight at any time is key when looking for an underdog who might need to pull off a dramatic comeback and Jourdain has a 100% finish rate. The only 2 fights that Jourdain has lost are fights that have gone to the judges. Some people may be concerned with that citing it as a reason to bet against him, but I see it as an opportunity.

Jourdain has 7 KOs and 3 submissions on his record and is so aggressive that he makes opponents slip up and then he makes them pay. Power might just be the area where Jourdain is strongest on this checklist, but it’s not raw unfiltered power like a Francis Ngannou or a Niko Price. Jourdain has fight-ending power but it’s far more dangerous because of how he sets it up with his other skills and attributes.

Fili vs Jourdain: How to bet 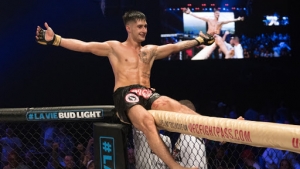 Even though Jourdain is younger than Fili and has less experience than Fili I don’t know that it will play in this fight. When a young fighter steps up in class I generally take that opportunity to fade them, but Fili’s game plan sets up perfectly with what Jourdain likes to do.

Over Fili’s UFC career he averages 4 significant strikes per minute while absorbing 3.96 per minute meaning that he is giving as good as he gets. Fili is hittable and relies on his power and chin to close the gap he leaves open. The beauty of these numbers is that they solidify for us the fact that Fili will play Jourdain’s game! I am a little concerned with Fili’s takedown ability and the 5-inch reach advantage, but I believe that Jourdain will chop the tree down with those leg kicks and now allow Fili to flow.

Fili struggles the most when he is uncomfortable in a fight and isn’t able to find his timing and range. Charles will be aggressive from the opening bell and look to break Fili and I think that will give him an edge. Truth be told the way these two fighters are this fight should be closer to a coin flip. I believe we are getting big value on Charles Jourdain at the current line and I am more than happy to roll the dice on him here. I am buying in. I am all team, Air Jourdain!