Let’s be honest. There has been a lot of talk regarding this fight not being worthy of a main event slot. The truth is, it isn’t UFC main event worthy. I am a huge fan of women’s MMA, but they could’ve done better here. That said… This is a great match up! It’s a solid fight and a possible changing of the guard spot for the women’s 125-pound division. A former title challenger looking to re-establish herself and get back to that title mix against a rising contender who is trying to break into the conversation for the first time. Let’s dig into the details and look for opportunities to make some money. 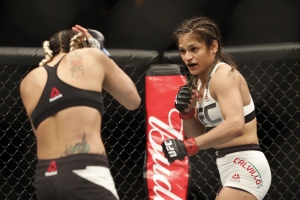 This is a striker vs grappler match, and even though the women are about the same age, it feels like a young vs old match as well. Eye has been around FOREVER and finally reached the pinnacle of the sport when she challenged Shevchenko for the belt. Calvillo is only 9 fights into her MMA career but has some hype around her as a contender. 6 of those 9 fights have been in the UFC and we’ve watched her grow and evolve. On Saturday Cynthia will have the opportunity to take that next big step in her career. If Eye can keep this fight standing she can definitely win, but if Calvillo is able to use her ground game there is a good chance she wins.

Jessica Eye brings a hard-nosed, forward stalking fighting style to the cage Saturday. She keeps a high boxing guard and sits down on her punches. To earn her title shot against Valentina Shevchenko she edged a split decision from Katlyn Chookagian (which is hard to do) by landing harder in their exchanges. Eye has good head movement and a powerful right hand that many female fighters don’t have.

Eye does a good job of mixing in leg and body kicks to keep her opponents at the range she likes. When Eye is forced to grapple she has decent takedown defense but she can be ripped to the mat. When the fight does hit the ground, she is intelligent off her back and works to regain her guard and work back to her feet. Eye really needs this win if she wants to get back to the title. It’s going to be a hard sell to rematch Shevchenko after that devastating KO loss, so if she wants to get back there she needs to win this fight and win it impressively.

Cynthia Calvillo is a pretty solid prospect at 125. She looks to have all the skills needed to cause problems when she puts it all together. Calvillo has a strong offensive grappling game and likes to bully her opponents against the cage. She is currently training at AKA with other starfighters like Danial DC Cormier and Cain Valezquez. She is mostly known as a grappler but has been working hard to level up her hands as well. In Calvillo’s recent fight against Courtney Casey, she tested her striking and abandoned her usual offensive takedowns and did quite well.

I don’t love it when grapplers fall in love with their striking, but I do believe that Calvillo knows where her bread is buttered. In Calvillo’s recent fight against Marina Rodriguez, she dropped the first 2 rounds to the talented striker. She realized going into the 3rd that she likely needed a finish. She put Rodriguez on her ass and rained down hell. Calvillo won a dominating 10-8 to force a draw and nearly finished Rodriguez late. I love this kind of grit and the ability to shift into a new gear when needed. 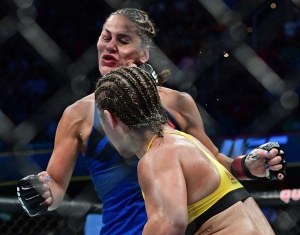 This fight plays out one of two ways. Either Jessica Eye can bully Calvillo into a fistfight and keep it standing or Calvillo is able to take it to the mat. We have seen Eye struggle with grapplers her entire career. Now, I’m not comparing Calvillo to the legendary Shevchenko, but even in Eye’s recent fight against the champion she was taken down and controlled handily for the entire first round.

Eye has put things together of late, but prior to her run in 2018/2019 Eye was on a 4 fight losing streak to grappling based fighters like Pena, McMann, and Tate. She hasn’t faced a solid grappler outside of Shevchenko in her previous 5 fights and I believe that she is going to struggle again. Another key we worth discussing is this is a 5 round fight. Eye seems to have solid cardio, going to the judge’s cards in every fight except the one she was finished by the champion.

We know that Cynthia has great cardio. She showed it off in her last fight, going hard in round 3 nearly finishing her opponent. I honestly believe this fight is one that plays to Cynthia’s advantage. We have the Apex’s smaller cage, making it easier for her to close the distance and press her foe against the fence. As long as Calvillo hasn’t fallen in love with her hands, I believe she can secure rounds by landing takedowns and controlling Eye on the mat. Simply the threat of the takedown can work for Calvillo here and open up opportunities on the feet as well.

Eye seems to get more defensive and shell up when she is concerned with being put on the mat.  That should allow Calvillo to open up. Eye uses leg and body kicks, and Calvillo has shown proficiency in catching them and using them to force scrambles and takedowns. The way we have seen Calvillo transition to dominant positions so effectively leads me to believe she can dominate Eye on the mat. In a 5 round fight, I’ll always side with the gas tank and grappling advantage.