Dustin Poirier vs Dan Hooker predictions for UFC Vegas 4 is the last fight before we get a week break and then we head straight to Fight Island!! And this card is not an easy one to bet. There are several big favorites who you cannot trust and there are some close lines in fights where we really just have no idea how they will turn out. Caution is key this week when betting these fights. With that in mind, we have to find bets that we like, but we also have to understand there is danger coming the other way. The bookie doesn’t give out free money often. With that in mind let’s take a look at this week’s main event.

Dan Hooker has been a long time prospect at 155 and here is his moment. He has managed to work himself into a contender position and is facing the last man to challenge 155-pound king Khabib and former champion Dustin “The Diamond” Poirier.

This is a big step in Hooker’s career and one that I personally can’t wait to see him take. Dustin is looking to bounce back from losing his belt and has a young hungry lion knocking on his door who he cannot look past.

Poirier vs Hooker: The Fighters

Why are we talking about this fight again?

For the second week in a row, I will be re-visiting a fight we covered earlier in the week. I do sincerely apologize for doubling up, but let me tell you why. We already broke down the undercard and all the spots we may have liked on it and talked about several of the dogs I believe are barking this week.

Naturally, we don’t just want to upgrade one of those to be the best bet for the week now do we? The main card kicks off with Sean Woodson and his late fill-in opponent Julian Erosa. We had a look at that fight when Kyle Nelson was involved but now that Erosa has taken his place I feel like this is a pass and likely a one-sided landslide for Woodson and that line is not one I find playable.

Gian Villante vs Maurice Greene is an absolute shit show of a fight and I don’t think you want to be anywhere near it. It looks like a complete setup spot for the true heavyweight Greene, but we see lower caliber fighters like him drop these spots all the time and Villante may not be the best fighter on the UFC roster but he is durable and hits hard.

Allen vs Daukaus is going to be a fantastic grappling match-up but could end up being a back striking battle. We see fighters who match up well in a particular area decide to compete in a position they feel they have an edge. Instead sometimes and with both of these high-level BJJ practitioners, I wouldn’t be at all surprised if they avoided the mat Saturday instead.

On top of that, the line is insanely wide and I don’t way to lay that kind of chalk on Allen against a dangerous opponent like Daukaus even though I think he wins. We broke down the co-main event in all its wild glory already and that fight is possibly the biggest stay away on the card with all the questions surrounding it.

Moving on to the main event Poirier vs Hooker

I will start by saying that I believe the line should be closer. If you are simply looking for a value play then Hooker is the side you want to be on. I have been a supporter and believer of Dan Hooker for some time, but for some reason, I cannot pull the trigger on him here and that surprised me. 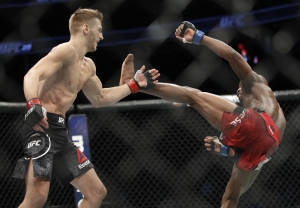 I have this wild feeling that Dustin Poirier puts it on Hooker late in the fight and puts the young gun down late. What I can tell you about this main event is that both of these fighters look to out-pace their opposition. Both fighters look to work the body and bank damage for later when they believe they can be the stronger fighter. Because they both follow that pattern and have a long history of digging deep not quitting when other mere mortals would have, I am going to look over in the main event!

At this point, we can lock up Over 2.5 rounds at -125 and I think that is a solid bet! Both of these men can finish, but they both look to take their time. Both men are insanely durable and have a history of going a full 25 minutes in 5 round fights. I think this fight hits round 4 but I don’t know how much further beyond that it will go.