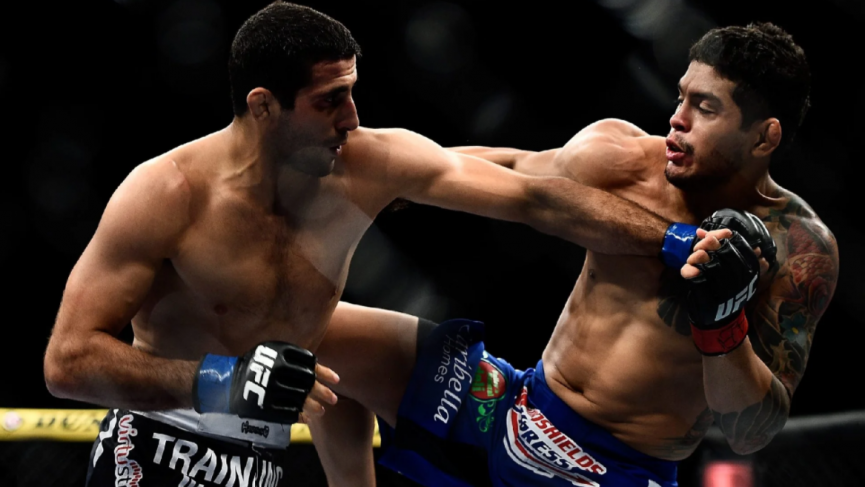 Diego Ferreira vs Beneil Dariush Pick – UFC Vegas 18 Predictions: Between both fighters, 17 of their 27 combined UFC bouts have ended by stoppage, with the ‘Under’ going 17-10 between them in their UFC careers.

On Saturday, Diego Ferreira and Beneil Dariush meet for the second time in the UFC in a Lightweight division scrap that kicks off the main card for UFC Vegas 18.

The DieHardMMA Podcast’s Clint MacLean breaks down this lightweight bout between Diego Ferreira vs Beneil Dariush in a rematch from their 2014 meeting at UFC 179.

Tale of the Tape: Ferreira vs Dariush

‘Carlos’ Diego Ferreira made his pro-MMA debut back in 2011 in the Texas regional scene, putting together an undefeated record along the way. His first MMA fight with global odds was in 2013 when Diego competed in ‘Legacy FC,’ where he went 3-0 and eventually won the promotion’s Lightweight Championship.

Ferreira made his UFC debut in 2014, debuting with a knock out in just 38 seconds, earning himself a ‘Performance of the Night’ bonus. Ferriera returned to the octagon just two months later and picked up a second-round TKO victory over Ramsey Nijem, landing yet another performance bonus for ‘Fight of the Night.’ The next fight saw him face Beneil Dariush, who handed him his first professional MMA loss.

Dariush out-landed Ferreira 32-21 in significant strikes and went 3 for six on takedown attempts to Ferreira’s 0 for 1. While it was an entertaining fight, Dariush seemingly won the fight with ease.

Ferreira returned to the UFC to redeem his loss six months later in a step-up fight against new UFC Lightweight contender Dustin Poirier. Dustin won the fight by 1st round TKO, handing Ferreira his second UFC loss and putting him on the first losing streak of his MMA career. Diego would bounce back from these losses in a big way. From 2016 on, Ferriera has strung six wins together, defeating fighters by the likes of Jared Gordon, Kyle Nelon, and Anthony Pettis along the way. Ferriera has not fought since last January and was scheduled to take on Drew Dober in May of 2020, but that fight was rescheduled due to COVID-19 and was subsequently canceled when Ferreira had to pull out of their fight in November due to an undisclosed illness.

Beneil Dariush made his UFC debut all the way back in 2014 and has compiled a 13-4-1 record since joining the promotion seven years ago. Dariush came into the UFC undefeated but dropped his second fight to Ramsey Nijem at UFC Fight Night 39, losing as a strong -290 favorite. From there, Dariush went on a five-fight win streak, which included the win over Diego Ferreira back at UFC 179. Dariush cashed as a +175 underdog, defeating Ferreria by a unanimous decision. From 2016 to 2018, Dariush had a 3-3-1 record, dropping fights to notable names like Michael Chiesa and Edson Barboza.

Dariush’s most devastating loss came at UFC 222 back in 2018, where he lost by knockout in just 42 seconds as a -400 favorite to Alexander Hernandez. Since the loss to Hernandez, Dariush has put together a four-fight win streak, with all four wins coming by way of stoppage. Dariush finds himself as a ‘coin flip’ underdog against Ferriera and has just one loss (Barboza) as the betting underdog in his UFC career.

UFC Vegas 18 Picks – Ferreira/Dariush Under 2.5 Rounds (+100 via Bet365): This fight is bettable regardless of which fighter you chose to back. Ferreira has gone 11-2 in his last 13 pro fights, profiting +10.74 units along the way, while Dariush is not far behind him with a 13-4-1 record, for +9.41 units profit in his last 18 UFC bouts. Needless to say, both of these fighters have delivered when asked and have come through multiple times as decent size underdogs. If you are going to bet on this fight, there is arguably value on both sides, depending on how you look at it.

While there is a stronger lean here towards Ferreira in this spot, the safer bet here seems to be the ‘Under’ at +100. Between both these fighters, the Under has gone a combined 17-10, in their UFC careers, profiting just over ten units between them, with 17 of 27 fights ending inside the distance. Beyond the numbers, the fact remains that while Beneil Dariush is a dangerous fighter, he has a tendency to leave his chin out and is willing to take a shot to give a shot, which is a very risky thing to do against a guy like Diego Ferreira. If Dariush doesn’t end this fight early, it is doubtful that Beneil will be able to survive the full fight, considering how hittable he can be.

This line on the ‘Under 2.5’ opened at around +105 and has since been on to the point where it is now at +100. There is an incredible amount of value on this spot since we know the path to victory for both these fighters. The longer this fight lasts, the longer it favors Ferreira, who comes in at odds of -125 as the betting favorite. If Dariush doesn’t win this fight early, then Ferriera will have time to pick his spots against Beneil, who is there to be hit in the later rounds.

When weighing your options to fit the handicapping, you’re left deciding with the ‘Under 2.5’ at +100, the ‘Fight Doesn’t Go the Distance’ at -110, or you can take your chance and bet Ferreira at the slightly inflated price of -125. In the end, the safer bet to make is the Under at even money.