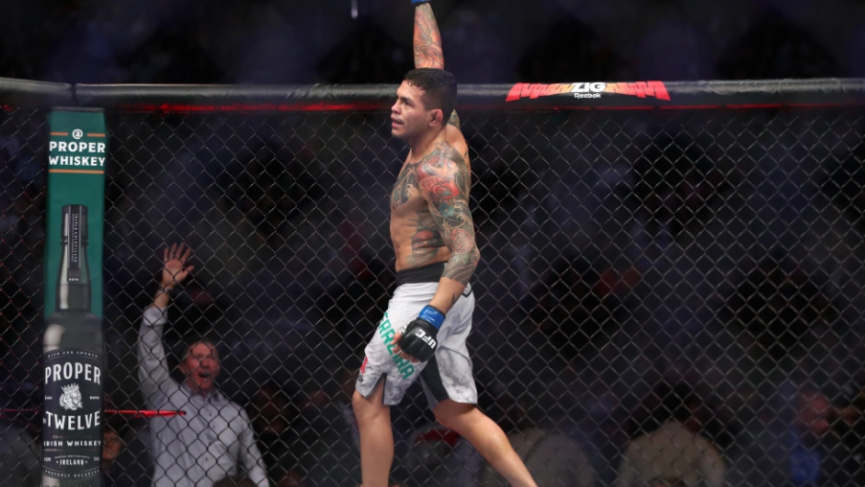 Diego Ferreira: UFC Vegas 18 Odds and Fighter Profile: Since his Legacy FC debut in 2013, Diego Ferreira has gone 11-2, profiting +10.74 units on the moneyline. Diego Ferriera returns to the octagon for the first time in a year to face an old rival in Beneil Dariush at UFC Vegas 18 on Saturday, February 6th.

Odds.com’s James Lynch talks to Diego Ferreira (17-2) ahead of his UFC Lightweight division bout against Beniel Dariush (19-4-1) at UFC Vegas 18 on February 6th.

Diego Ferreira: Tale of the Tape

Carlos Diego Ferriera made his professional MMA debut in 2011 with the ‘South Texas Fighting Championships’, and carried an undefeated streak into several different organizations including the UWF and the re-formed STFC.

Ferriera’s first MMA fight with global odds posted was at Legacy FC 24 in May of 2013, Ferriera defeated Carlo Prater by unanimous decision. Ferriera continued as undefeated all the way through his rise in Legacy FC, winning their Lightweight Championship over Jorge Patino in November of 2013.

Ferriera would make his UFC debut in 2014 at UFC Fight Night 44, where he defeated Colton Smith by rear-naked choke, just 38 seconds into the first round. The win got him his first taste of a UFC performance bonus, picking up $50,000 as the ‘Performance of the Night’.

Ferriera would return to the Octagon just two months later in August of 2014, defeating Ramsey Nijem by TKO in the second round, picking up another performance of the night bonus for ‘Fight of the Night.’

Ferriera’s professional MMA winning streak would get stopped just two months later, in his third fight of 2014. Ferriera dropped a unanimous decision to Beniel Dariush at UFC 179, losing the bout as a -220 favorite.

Ferriera’s next bout would be against Dustin Poirier in April of 2015, where Poirier would win via 1st round TKO, though Ferriera would pick up another performance of the night bonus for ‘Fight of the Night’

Since the loss to Dustin Poirier in 2015, Diego Ferriera has continued on to yet another undefeated streak, going 6-0 in a span of four and a half years, with wins over Anthony Pettis, Kyle Nelson, and Jared Gordon. Ferreira has yet to step foot in the octagon during the ‘pandemic-era’ and will make his first appearance in the UFC since January of 2020 when he takes on the man that broke his perfect pro-MMA record, Beneil Dariush, at UFC Vegas 18.

Ferriera has an 8-2 record in the UFC, and is one of the Lightweight divisions most underrated, and often forgotten names among the rankings, although he still holds the #10 spot in the UFC men’s 155-pound division.

If you’re going to bet this fight, the value is definitely on Diego Ferriera at the current odds of -122. Beneil Dariush has dropped 4 of his 18 bouts by stoppage, with his opponent going 4-14 for +8.2 units profit. However, while you can still get Ferriera to win ‘Inside the Distance’ at +300, there is less volatility on the moneyline rather than betting him to win by stoppage. Both Dariush and Ferriera have trended towards the ‘Under’ in their careers, Dariush has gone 11-7 to the ‘Under’ for +7.49 units profit, and Ferriera has gone 6-4 to the ‘Under’ for +3.87 units profit. The Under in this bout is lined at +110, and with both guys have a tendency to finish fights, there is a decent amount of value on this prop.