Eye vs Calvillo was AWESOME! Not only was it an exciting and entertaining night of fights, but we made some serious cash! Remember when everybody was calling it the worst card of the year? Unknown fighters looking to make their mark always makes for a very fun card.

The Curtis Blaydes vs Alexander Volkov fight card is one that people can’t possibly complain about. There are many more recognizable names on Saturday’s UFC Vegas 3 card, and I am expecting fireworks again. As is tradition, let’s get started by looking at the undercard of Blaydes vs Volkov and see if we can find some good spots!

Modafferi vs Murphy: The Matchup

If you have been with me for a while you probably already know that Roxy Modafferi is one of my favorite fighters. We have backed her successfully many times. She is an underdog machine and has cashed in most recently aT +300 to Antonina Shevchenko, and a massive +700 underdog against the hype train Maycee Barber. Roxy now finds herself with some respect from the bookmakers as a slight favorite against “Lucky” Lauren Murphy. I’m curious to see how she will do. Modafferi has all the makings of an underdog, but I can’t use her for that angle this week since she is the chalk. 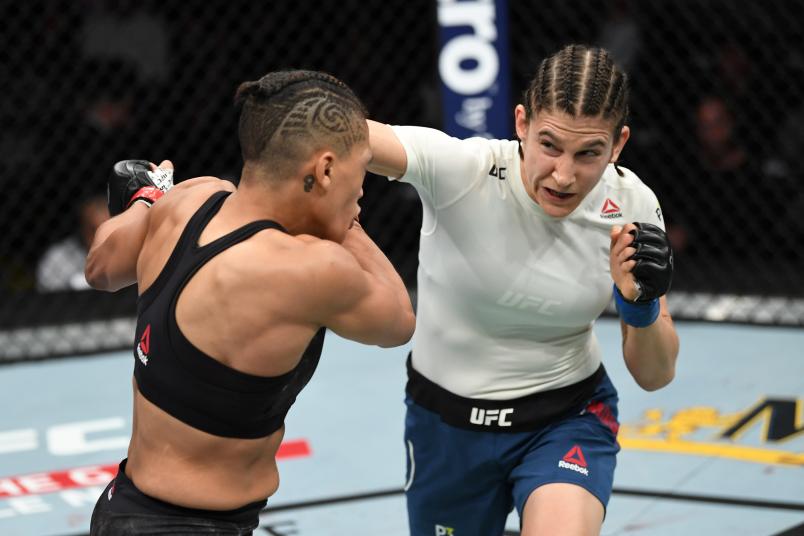 Roxy never stops moving forward, she has an excellent chin, she is a black belt in BJJ, she has awkward movement, and striking with the sole goal of getting the fight to the mat where she smothers her opponents. Recently, Roxy has started taking her strength and conditioning seriously for the first time in her career. It showed when she was able to handle Maycee Barber, but she will have her hands full with Murphy this weekend.

All the points that I like in Roxy will be staring back at her from across the cage because Lauren Murphy is a strong durable fighter who shows her heart every time she steps in the octagon. Murphy has basic striking, but is incredibly durable and shows power that is rare for the women’s division. She has improved take down defense and is hunting for the finish until that final bell. The thing I like about Roxy is that she doesn’t stop her offense for anything. She is durable and tough. When she shoots in for takedowns and gets the body lock she chains that attempt with trips or shoves against the cage and won’t be denied.

Murphy doesn’t stand out anywhere and if Roxy can stay on her, and drain that gas tank it should take some pop off of Murphy’s punches. I am going to bank on my girl Roxy one more time! If you take a look at her Instagram, she is packing on some serious muscle and that’s my biggest concern in this fight. Will Murphy be able to out-strength her? That’s not a concern I have anymore. For the first time in her career Roxy looks like a fighter, and I expect she will do to Murphy what she has been able to do to her past 2 opponents and make us some cash!

Casey vs Robertson: The Matchup

Both of these women have been struggling in the UFC lately. Courtney Casey is 2-3 in her last 5 and has 3 of those fights going to close hairy split decisions. Gillian Roberson is 2-2 in her last 4, all of them coming by way of finish. Robertson has been struggling to raise her game when she takes any step up in competition. When she faces lower level competition, she is a wrecking ball and destroys the women put in front of her. However, when Gillian faces fighters that can survive her early onslaught, she has a hard time staying in the fight at that point. Robertson seems to be a 2 round fighter and if she cannot put her opponent away, she is in trouble late in the round and hasn’t seen a 3rd round since 2016. The names on Robertson’s record however are respectable. She has submitted women like Molly McCann, Emily Whitmire, and Hannah Cifers! Her losses to Mayra Bueno Silva and Maycee Barber are also understandable considering the skill sets that those women bring to the table.

UFC Betting Trends - Betting on Fighters Coming Off a Loss

Cast Iron’ Courtney Casey is going to have a slight size and reach advantage, but she is also 8 years older than Robertson. Courtney has gone to decision with the likes of Claudia Gadelha, Felice Herrig, and Michelle Waterson. There is an experience advantage on the side of Casey that I would normally like to back, but Casey has some deficiencies that I believe will make it hard for her to win this fight. The path to victory against Robertson is to survive the early storm and flip the pace on her, and beat her into submission. Casey has 3 KO/TKOs on her record but hasn’t landed one since 2016 when she faced Cristina Stanciu who is 5-3 and appears to have retired after her 3 fight losing streak. In her UFC run against decent competition Courtney is not a knockout threat. Casey also has a pathetic 39% takedown defense over her UFC career and there is the key. BUT CLINT!!! She fought Cynthia Calvillo who is an excellent grappler and defended 6 takedowns!! 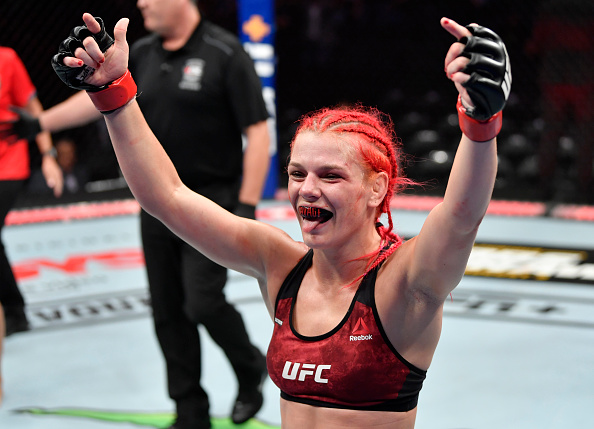 Interesting point I just made to myself. In my recent breakdown on Cynthia Calvillo, I discussed that fight with Courtney Casey and my determination was that Calvillo wasn’t interested in those takedowns. She had opportunities for them but was playing with her new toys. Calvillo wanted to strike with Casey. Casey was the perfect fighter to test Calvillo’s improved boxing without posing a threat on the feet or the ground, and if Calvillo felt the need she could take it to the mat whenever she chose. Gillian has an impressive 3.44 takdowns per 15 minute fight, and that number is short because she literally never goes 15 minutes! She lands those takedowns at 47% which may not sound impressive but what those numbers translate to is constantly attacking the takedowns and getting half of them.

Gillian “The Savage” Robertson is going to put Casey on the mat and I fully expect her to win by submission, but if she doesn’t this may be one of the few times where Gillian wins by decision. Casey has a solid ground game, but I don’t expect her to catch Gillian sleeping. I am a bit of a homer but I have been following Gillian’s career very closely, and she has been working extremely hard on her conditioning and striking recently. She is training with fellow standout Mariya Agapova who we saw destroy Hanah Cifers on Saturday. I expect an improved Robertson here, and that should be plenty to take out the mid-level talent of Courtney Casey.