We are headed back to Las Vegas Nevada, to the Apex center and the home of the Ultimate Fighter for UFC on ESPN: Woodley vs Burns. Let’s take a look at my best bets for the main event.

Best Bet: Value is on the Underdog

If you were going to back Tyron Woodley here, the only way I can imagine extracting value from that side is by taking him to win ‘Inside the Distance” at +160. I think there is very little chance that Woodley is able to survive 5 rounds, as we’ve seen him gas out in previous fights. I

However, at his current listed price of -150, I think there is absolutely no reason to be betting Woodley straight-up, as it seems there is only one clear path to victory for him in this one. The longer this fight goes, I think the more it swings into Burns’ favor, and Woodley’s path to victory definitely entails an early stoppage, as opposed to him grinding away a 25-minute decision.

If you think Woodley has what it takes to stop Burns, don’t bother with the inflated -150 price, take him ‘inside the distance’ at +160. Fight Could Go Deep. Although I don’t think Woodley is going to be able to grind out a decision here, what we could see is something similar to what we saw in the Kamaru Usman – Tyron Woodley fight.

Usman was able to dominate the fight and had control over Woodley for almost the entire 25 minutes, however, at the end of the day, Woodley is a tough finish. Gilbert Burns might be in the same boat as Usman was in Woodley’s last fight, he may dominate the bout, but struggle to get the finish. With that in mind, I like the ‘Fight Goes the Distance: Yes” prop at +150 quite a bit. 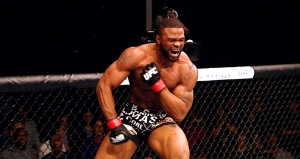 7 of Tyron Woodley’s last 14 fights have gone the distance, and 7 of his last 12 have gone ‘Over.’ Gilbert Burns has also trended to the Over in his UFC career, with the ‘Over’ going 8-6 in his 14 career UFC fights. The ‘Over 2.5 Rounds’ prop is currently sitting at -149 (via WilliamHill) and seems like a great value play for a fight that could last longer than what the betting public anticipates.

Gilbert Burns for the Win. It’s not very common for me to go against the fight trends here, but I think there is a lot more value on the dog than there should be, and I am going to take advantage of that. I think Burns is going to be able to get a finish or pick up a dominant unanimous decision. Give me Gilbert Burns at +155 for the win.