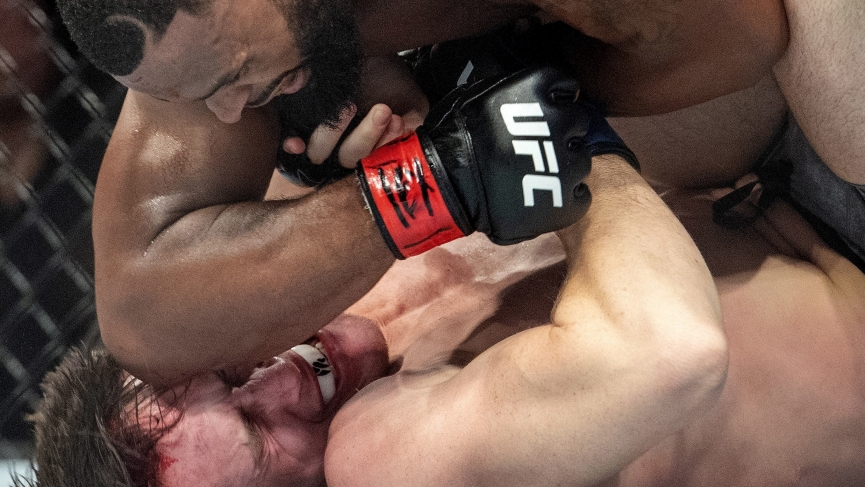 The most profitable active division trend for UFC Fight Night 176 is the Welterweight Underdog, which has gone: 42-52 for +18.73 units over the last 18 months. With Gilbert Burns currently sitting at +160, I think there is a lot of value on a fighter who is coming off an impressive victory just a few months ago, while his aging opponent hasn’t fought in over a year.

There is also an active trend involving the ‘coin flip’ heavyweight, however, the bookmakers and betting public have yet to decide if Blagoy Ivanov or Augusto Sakai should be the favorite in this heavyweight bout that could go either way.

Let’s take a look at all the active division trends for the UFC Fight Night 176 main card. 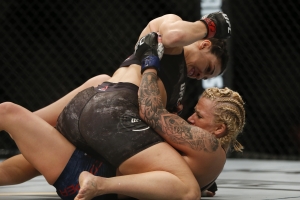 Implied probability suggests that any favorite in this division is worth a shot at -260 or better. However, Dern is currently a -400 favorite against Cifers, so unless it’s for the purpose of a recreational parlay. I would stay off Dern in this one.

The Over has hit in the Women’s Strawweight Division at a 77.8% rate over the last 18 months, going 28-8 for +2.17 units profit. Implied probability says that any over in this division is worth a shot at -348 or better. There is a decent amount of value on the ‘Over 1.5 Rounds’ prop in this fight, currently sitting at -160.

Due to the separation in talent between Dern and Cifers, it seems as though the betting public and the oddsmakers think this one is going to be over in a hurry, even though it is very rare for a UFC women’s strawweight fight to be stopped inside the distance. In Cifers last fight, she was outclassed by Angela Hill, but still managed to last over nine minutes in the cage. I really like the Over 1.5 at -160 here.

The 8-1 Roosevelt Roberts takes on Brok Weaver (14-4) in a Lightweight bout between two fighters that are coming off wins. Weaver is on a 7 fight win streak and is slowly making his way up the ranks in the UFC Men’s Lightweight Division. However, if he wants the streak to continue, he will have to get past the heavy favorite in Roosevelt Roberts.

The favorite in the UFC Men’s Lightweight Division has hit at a 75% rating since the start of 2019, going 69-23, for +9.57 units profit. Implied probability suggests that any favorite in this division at -300 or better, is a solid value play. Unfortunately for backers of this trend, Roosevelt is currently sitting north of -300, at -326. Although the favorite has done very well as of late, I think the odds on Weaver might be a little bit skewed, for whatever reason.

The separation between these two fighters is not indicative of what the odds would suggest. I would wait and see where the line ends up on this one. If you’re getting -300 or better on Roberts, I would suggest using him in a parlay piece. If you’re getting +300 on better on Weaver. I would take a shot on the dog. Especially an underdog who is on a seven-fight winning streak.

You can currently get the Under 2.5 in this fight at +165. I would wait and see where this line ends up. My handicapping suggests this fight ends by stoppage, but the trends suggest it goes the distance. It’s a matter of ‘wait and see’ in this one.

The Bulgarian Blagoy Ivanov takes on the Brazilian Augusto Sakai in a UFC Men’s Heavyweight bout. Ivanov is 2-2 since coming into the UFC in 2018, while Sakai is on a four-fight winning streak, with a 77% knock out rating. It is the definition of a coin flip fight here, as both fighters are close to -110 on each side, depending on what book you’re looking at. The average odds have Sakai as the very slight favorite at about -107 to Ivanov’s -102.

The coin flip underdog has won 72.2% of heavyweight bouts going back to 2019, going 13-5 for +8.58 units. While the straight-up dog has gone 24-31-2, for +4.11 units profit in that same stretch of time. While it’s still unclear exactly who the underdog is going to be by the time octagon door closes, I would suggest a ‘dog or pass’ mentality between two fighters that are pretty evenly matched.

I am not normally one to bet Unders in heavyweight bouts, as it seems like the square play to make. However, with two guys that have a slow pace, but can hit hard, I have a feeling this one doesn’t go the distance. Give me the Under in this one.

Gilbert Burns is on a five-fight winning streak and hasn’t dropped a fight since July of 2018. Burns is hoping to make an impact with a win over the #1 ranked contender in the welterweight division. With a victory, Burns could leapfrog himself into a title shot position, let’s take a look at the division trends surrounding this welterweight main event.

The underdog in the UFC Men’s Welterweight Division has been a profitable side to back over the last 18 months of UFC fights. Since the start of 2019, the dog in welterweight has gone 42-52 for +18.73 units profit. If you bet $100 on the dog in every UFC welterweight bout, since January of 2019, you would have profited +$20 per fight, whether you won or lost.

Implied probability suggests that any underdog in this division at odds of +124 or better, is a value play, based on this trend. Gilbert Burns is currently a +160 underdog, which may be a bit of a stretch, as Tyron Woodley is likely not the same fighter he once was, as he just turned 38 years old last month.

Match-up wise, I think this fight is a lot closer than what the odds indicate, so I have a conviction that Burns is the right bet to make here, regardless of the outcome. Laying -170 on an aging fighter, who hasn’t fought in over a year, vs an up and coming contender, who fought two months ago. The value is on the dog, without a doubt.

The ‘Over 2.5 Rounds’ prop in the Woodley/Burns fight is currently sitting at -137. Burns has gone to decision in 3 of his last 4 fights, while Woodley has gone the distance in 4 of his last 5. I think this one lasts a little bit longer than it should, as we have seen in multiple events during this lockdown, the referees have been sometimes hesitant to end these fights as quickly as they normally do.

We are also going to be in Las Vegas, so the standards of what entails a stoppage, whether it be a cut or an injury, is a little bit more lenient than what we’ve seen in other states over the years. Give me the Over 2.5 rounds prop here at -137.

Stay tuned for my Woodley vs Burns article, for a full fight trends breakdown!