San Francisco 49ers Odds – Can They Do It Again? 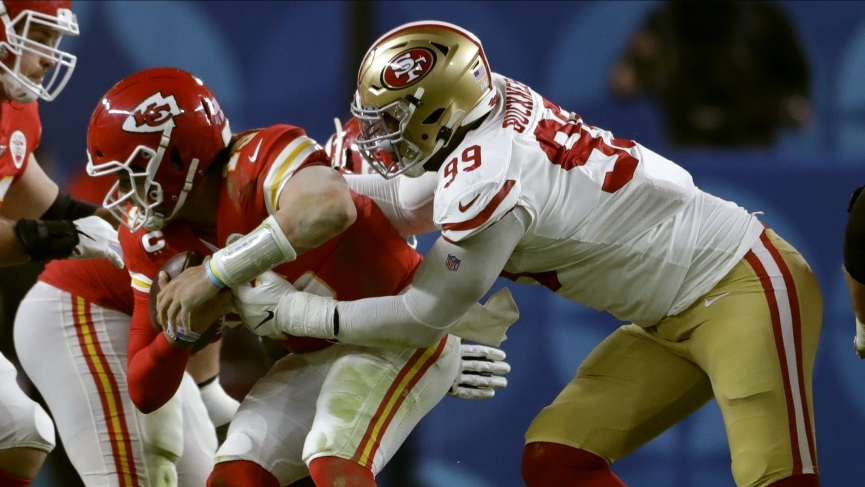 We have seen little line movement in the futures market this season for the San Francisco 49ers. That’s to be expected considering the San Francisco 49ers were ten minutes away from a Super Bowl Championship last season. In 2019 Kyle Shanahan coached his way to a 13-3 season with a phenomenal defense and serviceable offense. Can they make the Super Bowl again? Sure they can.

Right now, who has a better team in the NFC? The New Orleans Saints? They have a quarterback that will turn 42 years old during the 2020 NFL Season in Drew Brees. A quarterback that showed serious signs of regression in 2019.

The Green Bay Packers? The team that wasted a first-round draft pick on a project in Utah State QB Jordan Love, rather than draft another skill position player to help Davante Adams?

I just don’t see how teams like the Philadelphia Eagles and Dallas Cowboys are even in the conversation this season. Every snap that Eagles QB Carson Wentz takes this season, the Eagles front office will be holding their breath. Would you bet on him starting all 16 games this year? I wouldn’t.

The Dallas Cowboys might exceed expectations this year. The Garrett era is finally over, and they have upgraded the head coaching position substantially. Last year, the Cowboys had the #1 offense analytically for most of the 2019 season. If everything goes right for the Cowboys, and the defense improves considerably they can make a run.

The Seattle Seahawks are the only ones that would worry me if I’m the Niners. They have the best quarterback in football, and that gives them a chance every game. If the Seattle defense takes a step forward they are a legitimate contender.

Nonetheless, going into the 2020 season the San Francisco 49ers are the team to beat in the National Football Conference. They were one overthrown pass from winning the Super Bowl last season. I don’t think these odds are a fair representation of their chances. I would take them at (+1000) to grab the Lombardi this season.

Will the 49ers Win the Super Bowl, NFC Championship or NFC West?

The San Francisco 49ers have the third-best odds (+900/+900) to win the 2021 Super Bowl. Only the Kansas City Chiefs (+650/+600) and Baltimore Ravens (+700/+700) are favored by more to raise the Vince Lombardi Trophy. Last year’s winners, the Chiefs, are unsurprisingly at the leaders out of the gate. After all, they did grab a fantastic pick at the end of the first round in RB Clyde Edwards-Helaire, who will instantly become a vital weapon out of the backfield for QB Patrick Mahomes.

What Went Wrong for the 49ers Last Season? 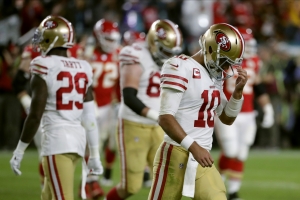 The San Francisco 49ers held a 10-point lead with a little more than six minutes to go in last year’s Super Bowl. What followed was a house of horrors – a total shitshow, if you will. QB Jimmy Garoppolo missed WR Emmanuel Sanders on a wide-open deep throw to the end zone with 1:30 left in the fourth quarter down 24-20.

If we are counting figures, I am missing quite a bit on that late deep throw where Jimmy G missed WR Emmanuel Sanders in the end zone.

Garoppolo had a mixed bag of games last season, compiling 3,978 passing yards and 27 TDs/13 INTs to go along with a 58.8 QB rating. Losing Sanders to New Orleans in the offseason will certainly hurt going forward. However, TE George Kittle is still around and he’ll be a huge help going forward for Jimmy G and the rest of the 49ers.

What Will Work for the 49ers This Season?

One thing the 49ers did flawlessly last season was run the football. RBs Raheem Mostert (772 rushing yards), Matt Breida (623 rushing yards), and Tevin Coleman (544 rushing yards) combined to rush for just under 2,000 yards. San Francisco did not address the offensive line in the first round of the draft, and that is somewhat troubling. Longtime 49ers OL Joe Staley is mulling retirement but the team would certainly love to have him back for another run.

San Francisco’s defense was one of the best in football last season, led by a daunting defensive line that’ll return Joey Bosa, Arik Armstead, and others. Some pieces will be missing, and Dee Ford could even be one of those players before the 2020 season starts.

A common theme in San Francisco’s offseason is trades, and that carried over into the 2020 NFL Draft. Initially, the 49ers held the No. 13 overall pick – that gift came via the trade of DeForest Buckner to the Indianapolis Colts. San Fran traded that pick to the Tampa Bay Buccaneers and moved just one spot behind to take DT Javon Kinlaw from South Carolina at No. 14. Just when you thought the wheeling and dealing was over, you became a silly goose. The 49ers traded up from the No. 31 overall pick with the Minnesota Vikings to grab the No. 25 pick and select WR Brandon Aiyuk from Arizona State.

How will the 49ers Fare this Season?

The NFC isn’t as strong as usual, even with Tom Brady and Rob Gronkowski heading to Tampa Bay. Luckily for the 49ers, it shouldn’t be too hard to make the playoffs. Winning the NFC West certainly seems like a possibility, given that Seahawks and Rams have glaring holes in their respective rosters.

Teams that lose in the Super Bowl tend to have a tough time mustering that level of energy back up once again. Making the playoffs, and even winning the NFC, could happen but winning the Super Bowl is a far stretch. We feel like the Chiefs and Ravens are better options, along with the Saints and Buccaneers from the NFC.