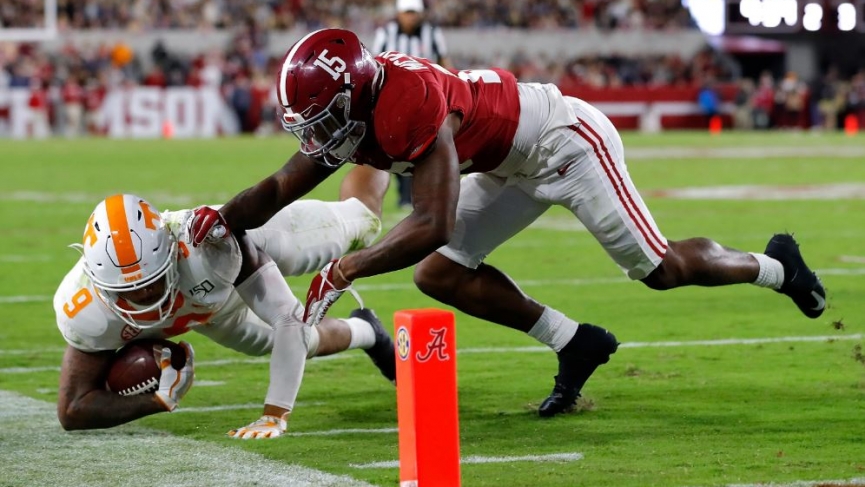 The No 2 Alabama Crimson Tide has a great offensive machine at the moment and is unstoppable no matter the opponent. Just last week, a strong Georgia Bulldog defense was torched by the Tide in the second half. No doubt, the referee calls on the field all went the Tide’s way, including a phantom pass interference call in the end zone. That call indeed swung the game’s momentum to the Tide. If that penalty did not occur, the Tide then had a lengthy fourth-down field goal attempt with a suspect kicker. Instead, they started first-and-goal from the two-yard line. Nevertheless, the Tide offense puts up substantial offensive numbers, having exceeded 415 total yards in each of their last two games.

The most active game on the college football betting boards features Alabama on the road at Tennessee. Currently, 70% of the 1097 tickets bet across 20 sportsbooks are backing the Tide and 85% of the money bet. As a result, the betting line that opened with the Tide favored by 19.5 points has steadily risen to make the Tide a 21.5-point favorite.

Through three days of betting action on this game, the levels are incredibly high and call for a contrarian bet on the Tennessee Volunteers. Human behavioral studies show that when the betting public (including the professionals) is betting with irrational exuberance on any team, the opponent, who is almost always an underdog, is the bet that covers the spread and brings home the bacon. Sometimes, an unwanted underdog kicked to the curb wins the game outright.

Can a Double-Digit underdog Win the Game in the SEC Conference?

Let us start by asking our omnipotent database a few questions. How much money is made on double-digit home underdogs, who are ranked and facing another SEC foe that is also ranked? Our database reveals that SEC double-digit home underdogs ranked and facing a ranked conference foe have posted a 1-8 straight-up (SU) record for 11.1% wins and a 3-6 against-the-spread (ATS) record for 33.3% winning bets. However, the ‘OVER’ bet in these games has earned a stellar 8-1 record good for 89% winners since 2010.

Making Money with Dominating Teams is Not Easy

The attraction to betting dominating teams like the Tide is magnetic and builds confidence as game time approaches. However, they are not always the best bets to make regularly.

Betting systems can play a critical role in determining the right time to not lay the big wood with dominating teams. This first-half betting system has earned a stellar 68-24-1 ATS record good for 73% winning bets over the last five seasons. There are three requirements.

Bet on home teams using the first-half line when:

Is the Tide Prone to a Letdown?

On the shows with Jimmy, I talk about a statistical term called ‘revert to the mean.’ Teams performing at exceptionally high levels over several games that are significantly higher than their season-to-date averages are prone to underperform expectations. So, the term ‘reverting to the mean’ is akin to an overbought stock prone to a price correction or consolidation in the marketplace. The Tide offense is not prone to correction, and the levels they have played at are sustainable because they are close to the season-to-date average levels. Now that is scary for any defensive coordinator.

The Tide has won 13 consecutive games over the Volunteers and covered the spread in nine of the 13 games. The average betting line for these games had the Tide installed as 20-point favorites regardless of location.

The machine learning models predict that the Tide will score 35 or more points and pass for an average of 9.5 yards-per-attempt. In past games in which the Tide met or exceeded these performance measures has produced a 53-0 SU record winning by an average of 34 points and a 36-16 ATS record good for 69% winning bets. When the game has been against an SEC foe, including the previously mentioned measures has produced an incredible 30-0 SU record winning the games by an average of 31 points and a 24-6 ATS mark good for 80% winning bets. Take the Alabama Crimson Tide as a Best Bet