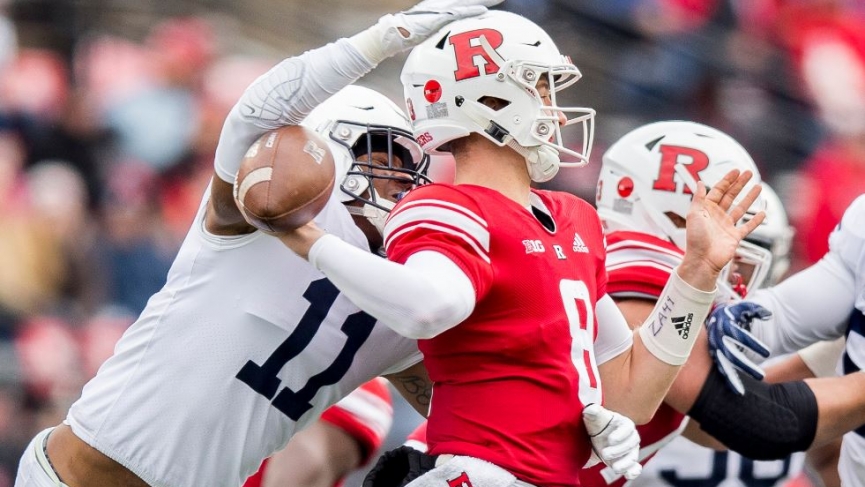 The Rutgers football program and its fans have cautious optimism for the first time in many years. The school brought back head coach Greg Schiano for a second stint as head coach of the Knights. His previous teams earned a 68-67 straight-up (SU) record 69-59-3 ATS mark good for 54% winning bets spanning the 2001 through 2011 seasons. The Knights were a great team to bet on in bowl games with a 5-1 SU and ATS record. After the Knights crushed Kansas State 38-10 in the inaugural Texas Bowl on December 28, 2006, the Knights finished the season ranked 16th in the final AP poll. The program has not appeared in the Top-25 since then, but the Knight’s rebuilding plan is finally moving in the right direction.

The Knights program benefitted greatly from Schiano’s anticipation that the NCAA would allow one transfer-per-athlete without having to sit out a season in light of the COVID-19 pandemic. He went out and aggressively recruited and signed 17 freshmen that form the best freshman class in at least the last five seasons. By signing 17 freshmen, he left plenty of room for transfers from other programs, which has paid off well.

Perhaps the most significant and most valuable addition to the Knights program is their new offensive coordinator Sean Gleason, who brought the Princeton offense into the modern age of college football. All these moves combined underscore the rebuilding process for the Knights program. They may not be enough just yet to see the Knights become bowl eligible, but there is no doubt they will be much better than the last two editions that won three games combined.

The Quarterback Battle at Rutgers

The Knights roster and depth chart was released Monday and contained five positions with co-starters reflecting that there are no final decisions ahead of their season opener against the Michigan State Spartans. The quarterback position was one of those duel player listings with Artur Sitkowski and Noah Vedral named. In my opinion, Vedral is a dual-threat signal-caller from Nebraska and offers the most creativity with OC Gleeson’s offensive scheme.

Bettors Are Taking the Points

The public bettors and the professionals like the Knights getting 13.5-points. The line for this Big Ten matchup opened with the Spartans favored by 15.5 points and a total of 46.5 points. Bets placed on the Knights account for 75% of the tickets and 84% of the total money bet. “Joes” love betting college favorites, so this is an unusual and powerful betting situation seeing the “joes” and “pros” supporting the underdog Knights.

Currently, the market prices the Spartans as 13-point favorites, which is a decline of 2 points from the opening level. The total has declined two points to 44.5 points. These betting trends are strong so, if you like the Knights, bet them now.

The advantage is to the team that has more returning starters than the opponent when the season starts. This betting system underscores this fact and has earned a 70-44 (SU) record using the money line in games played over the last five seasons. There are three requirements for this system.

Bet on the road team when:

Rutgers is currently a +12 point underdog via BetRivers, and it’s likely the best bet to make in this matchup. The machine learning models project that the Knights will score at least 28 points and gain a minimum of 200 rushing yards in this game. In past games in which the Knights met or exceeded these performances, measures have earned them a remarkable 31-0 SU record and 25-5 ATS record good for 83% winning bets since 2004. Moreover, 10.5 to 14-point Big Ten road underdogs have earned a 12-42 SU record and 33-21 ATS mark, good for 61% winning bets since the start of the 2015 season. Take the Knights plus the points as a Best Bet and expect the possible upset win.