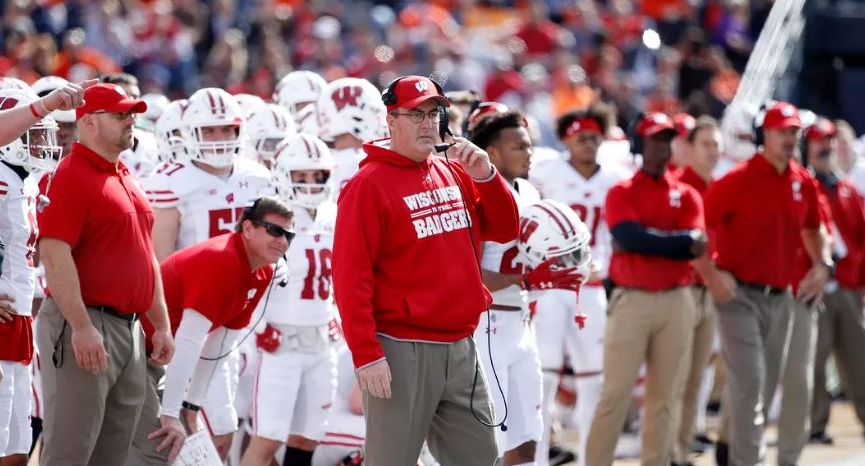 Odds.com’s Illinois vs Wisconsin Pick – College Football Week 8: Wisconsin and Illinois lead the Big Ten out of the 2020 tunnel with a Friday night battle in Madison.

Finally, there’s Big Ten football on the college football betting card. Some two months into the 2020 schedule, the conference is hitting the gridiron with an aggressive 8-game slate over eight weeks, and it all begins with a Friday night battle in Wisconsin where the No. 14 Badgers host the Illinois Fighting Illini.

Camp Randall Stadium in Madison is the sight for the first football action in the conference this season. The Big Ten Network will be on hand to broadcast the 8 p.m. (ET) kickoff, and DraftKings is carrying the Badgers as 19½-point favorites. Scoreboard bettors are looking at 54½ for their decision making.

You have to go back to 2011 to find the last winning season for the Fighting Illini. Twice since then, Illinois has had to opportunity to break the streak only to lose a bowl game and fall to 6-7. That was the case a year ago when Lovie Smith and the Fighting Illini toted a 6-6 record out to the Redbox Bowl where California hung a 35-20 decision on them, closing the campaign with 3-straight losses.

It has been a tough four years in Champaign for Smith and his staff as Illinois has won just 15 of its 48 contests. Things were definitely looking up in 2019 before the tailspin at season’s end, and 2020 looks like another tough row to hoe with the Fighting Illini picked to battle Northwestern and Maryland for the cellar according to the NCAA football futures.

There is some talent returning on offense that could buck those odds, starting with quarterback Brandon Peters who threw for more than 1,800 yards and 18 TD last season. The senior signal-caller will also have his favorite receiver back, Josh Imatorbhebhe. That duo hooked up 33 times a year ago, nine of those connections going for scores. Illinois also has some experience returning on the O-line, led by senior center Doug Kramer.

The defense was middle of the road a season ago, hurt statistically by a 3-game stretch against Nebraska, Minnesota, and Michigan when the unit surrendered 40+ points in losses. Jake Hansen and Milo Eifler aren’t household names, but provide the Fighting Illini with experience at linebacker, while safeties Tony Adams and Sydney Brown lead the defensive backfield.

With Coan Out, Mertz Gets His QB Shot

Wisconsin is seen as one of the best threats to Ohio State cruising to another B1G title, but Paul Chryst knows he and his staff have their work cut out for them if that’s going to happen. The Badgers have to find someone to take Jonathan Taylor’s spot in the backfield after he rushed for more than 2,000 yards in 2019, as well as finding replacements for linebackers Chris Orr and Zack Baun.

The offense took another hit recently with the loss of QB Jack Coan. The senior suffered an injury to his right foot in practice and is out indefinitely after passing for more than 2,700 yards last season. That opens the door for sophomore Graham Mertz, a former 4-star recruit out of Kansas. Chryst is also trying to rework his offensive line.

Orr and Baun led a defensive unit that pitched shutouts in four of Wisconsin’s first six games a year ago, five of those early contests staying ‘under’ the college football odds. The good news is the Badgers have plenty of experience on the line and in the defensive backfield to help matters until the linebacking corps gets reacquainted and finds the right pieces.

Friday’s clash marks the 88th meeting between the two programs, Wisconsin up 42-38 in the rivalry along with 7 ties. The Badgers had won nine in a row when they traveled to Champaign last October, and that streak came to an end when Illinois pulled off a 34-23 stunner as a 4-TD underdog.

Illinois had dropped four in a row before the upset, while Wisconsin was off to a 6-0 start and might have been guilty of looking ahead to its follow-up game with Ohio State. The Badgers have won the last seven played in Madison, with the Fighting Illini’s last win at Camp Randall coming in 2002. Wisconsin has covered four of the last five on its home turf, with the last four in Madison topping the totals.

There is an 80% chance of rain in Madison during the day on Friday, though that system is expected to move out by game time. How long before game time it leaves will determine the footing on the field at Camp Randall Stadium, but it will at least be one of the coldest season openers in Wisconsin history with much of the contest played in the 30s.

Best Bet: Illinois +19.5 (-113) via BetRivers: Going to a second-string quarterback first game out of the chute leaves me hesitant to play the Badgers, no disrespect to Mertz. I’m going to take Illinois and the points with my free college football pick in a 35-20 Wisconsin triumph.