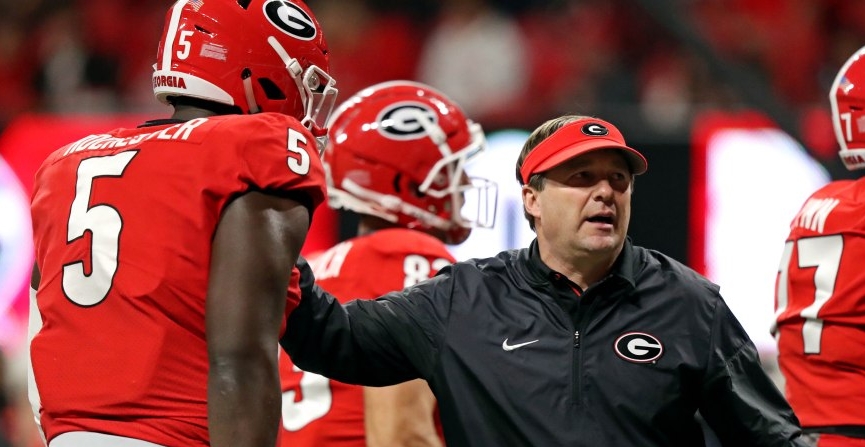 Odds.com’s Georgia vs Alabama Pick – College Football Week 7: Will Nick Saban’s absence on the sidelines Saturday affect our free pick in the big SEC clash between Alabama and Georgia?

Let’s say the Mrs. just informed you her parents are coming over Saturday night for dinner and a game of Pictionary. The news is a bummer on several fronts, tops among them any ideas you have of easing into your La-Z-Boy to catch Week 7’s marquee matchup between the No. 3 Georgia Bulldogs and No. 2 Alabama Crimson Tide.

Well, you’re in luck. Not only can you DVR the top-5 clash for later viewing, but there’s also an excellent chance you’ll get to see the same two teams play again at the SEC Championship Game in December. The last two unbeaten in the Southeastern Conference gets prime-time treatment from CBS starting at 8 p.m. (ET). There should be about 20,000 fans at Bryant-Denny Stadium in Tuscaloosa, though Alabama coach Nick Saban will not be there himself after a positive virus test.

Word of Saban’s test had an immediate and dramatic effect on the spread; FanDuel had the Crimson Tide favored by 6½ Wednesday afternoon, that number almost cut in half too -3½ when the news broke. The total has been hanging steady at 56½.

Kirby Smart’s squad will be looking for their third consecutive victory over a top 20 team, having taken down Tennessee and Auburn the last two weekends. Both of those victories came at home, however, and the Bulldogs will be facing an Alabama side that has won 18 of its last 19 SEC home games.

Last week Between the Hedges, Georgia took care of business against then-No. 14 Tennessee with a 44-21 dusting. The Volunteers appeared poised to pull off the upset as 12½-point underdogs when they took a 21-17 lead into the locker room. The Bulldogs clamped down on defense in the second half, however, and Stetson Bennett guided the offense with 238 yards through the air and a couple of scores, adding another touchdown with his legs.

Georgia arrives in Tuscaloosa in pretty good health. Tailback James Cook missed last week’s win over the Vols with a shoulder injury but is expected to suit up to face the Crimson Tide. JT Daniels, the QB transfer from USC, could be finally ready to see game action after recovering from a torn ACL, but with the job Bennett has turned in, the Bulldogs may not need him. Linebacker Jermaine Johnson was banged up against Tennessee but is expected to play.

With Saban on the sidelines last week, the Crimson Tide found themselves in a shootout down in Oxford last Saturday with Ole Miss, and Alabama had the just enough ammo to gun the Rebels down, 63-48. The outcome remained in doubt until late in the fourth quarter, the Crimson Tide coming up short of the cover after closing as 24-point chalk on NCAA football odds cards.

Alabama had two huge weapons in its arsenal, the biggest being Najee Harris who rushed for over 200 yards and scored five times. His last TD with a little more than a minute left allowed Crimson Tide fans to finally breathe a sigh of relief with the upset avoided. While Harris was controlling things on the ground, Mac Jones had things going on through the air with his second consecutive 400-yard passing effort. The junior completed 28 of his 32 aerials and leads the nation with a 220.3 QB rating.

While the offense was rolling up more than 700 yards, the Crimson Tide defense looked lost giving up nearly 650, a new record that had Saban wondering if Ole Miss knew Alabama’s defensive signals. The Rebels have disclosed this week they are experiencing a few positive virus tests, but with the exception of Saban and AD Greg Byrne, Alabama’s injury list is empty.

It’s something of a rare get-together for the Bulldogs and Crimson Tide. They’ve met 69 times, but this is just the 19th clash since 1972 and only the second regular-season contest since 2008. Alabama has won the last five matchups – the streak dating to that ’08 meeting – and owns a 40-25 advantage in the rivalry, four more contests tied.

The two most recent battles took place in the 2018 SEC Championship and the College Football Playoff Championship about 11 months earlier. Alabama won them both, but Georgia backers came away with winning bet slips. Four of the last six hopped ‘over’ the totals, plus a push on a 63-point mark in the 2018 league title tilt.

The weatherman is calling for an absolutely perfect evening in Tuscaloosa, with the thermometer in the mid-60s at kickoff and clear skies. Steve Sarkisian is expected to be acting head coach for the Crimson Tide, and NCAA rules prevent Saban from being in contact with any of his coaches during the game while isolating at home. My college football pick is on Alabama minus the points as the Tide still rolls.