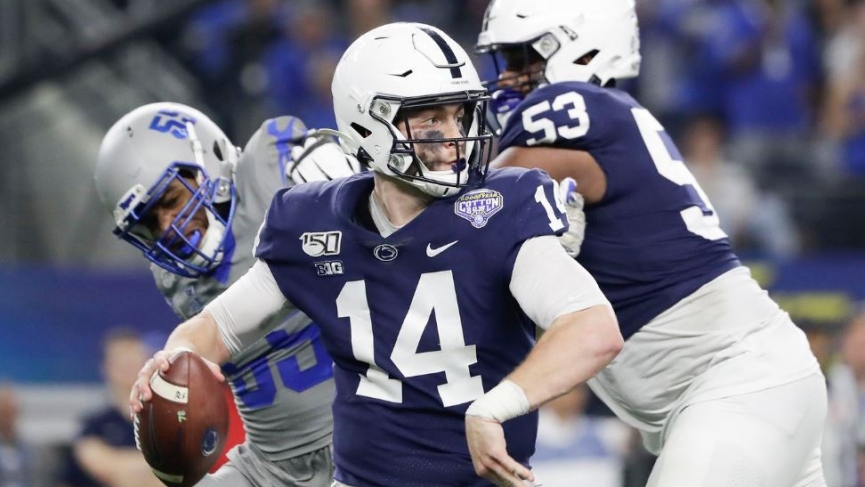 Odds.com’s Penn State vs Indiana Pick – College Football Week 8: The Lions have won 22 of the previous 23 meetings with the Hoosiers by an average score of 35-21 since 1993. However, the Lions betting record is 12-10-1 ATS against Indiana.

After a 10-month hiatus, the Big Ten Conference launches their abbreviated schedule starting this Saturday. One of these games features a terrific matchup between the No 8 Penn State Nittany Lions traveling to Bloomington, Indiana to take on the Indiana Hoosiers. The College Football betting line opened with the Lions favored by 7.5 points and a total line of 56.5 points.

The History of This B-10 Conference Matchup

The Hoosiers’ only win in this series was a 44-24 win and easily covered the spread as 3.5-point home underdogs. Since that win, the Hoosiers have lost the last six games and have posted a 2-3-1 ATS mark.

The last two games have been highly competitive between these programs. In 2018, the Lions clawed their way to a 33-28 win but failed to cover the number as 14-point favorites in Bloomington. In 2019, the Lions hosted the Hoosiers in Happy Valley and had another challenging contest escaping with a 34-27 win but failed to cover the spread as 14-point favorites. So, the short betting line for this matchup is not a surprise given the recent history between these programs.

Is Penn State a Contender for the College Playoffs?

The Lions are a definite contender for the College Football Playoffs (CFP) this season. Like the previous five seasons in the B-10’s East Division, the first step along the CFP path for the Lions will lead through the Ohio State Buckeyes and Michigan Wolverines.

Currently, in the East Division, the Buckeyes are the favorites with futures odds of -200. The Lions find themselves in second place in the futures standings and are getting +350 at many sportsbooks. The Wolverines are in third and are getting +450 in the futures market. So, those futures lines reflect how much better the Buckeyes are than the Lions and Wolverines. Despite this fact, betting the Lions to win the East Division is a strong wager to make.

Do the Hoosiers Have a Chance to Upset the Lions?

The Hoosiers had a strong 2019 campaign posting an 8-5 SU record and an 8-5 ATS mark. They received an excellent bowl bid to the TaxSlayer Gator Bowl to take on SEC-member Tennessee Volunteers and lost 23-22 but did cover the spread by a single point.

The Hoosier’s head coach Tom Allen is ecstatic with 17 returning starters, including eight on offense and nine on defense. Quarterback Michael Penix Jr. is back after missing most of last season due to many nagging injuries. The Hoosier’s lost their primary QB in Peyton Ramsey, who threw for 371 yards against the Lions last season. Ramsey elected to transfer to the Northwestern Wildcats and become their starting QB this season. The Hoosiers possess a strong corp of receivers led by Whop Philyor and Try Tryfogle.

The Hoosier’s punishing ground attack is the centerpiece of their offensive scheme and led by running back Stevie Scott, who has rushed for nearly 2,000 yards the past two seasons. The returning starters add another element of experienced talent to an explosive offense. The last teams that upset the Lions all had strong ground attacks.

Penn State is currently a -6 point favorite via DraftKings, and it’s likely the best bet to make in this matchup. The machine learning models have many projections using several performance measures that overwhelmingly favor the Lions to win this matchup by double-digits.

The Lions have one of the most balanced and explosive offensives in the nation. They are expected to score at least 28 points and average a minimum of 6.0 rushing yards-per-attempt. In previous home games installed as favorites and meeting these measures has earned the Lions a perfect 11-0 SU record and an 8-2 ATS mark for 82% winning bets that covered the spread by an average of 14 points.