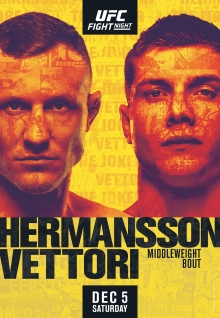 Marvin Vettori picks up the decision victory over Jack Hermansson, cashing at +335 to win by decision, and the ‘Fight Goes the Distance: Yes’ prop cashed at +200. With that, in 9 career UFC bouts, Marvin Vettori has gone the distance in 7 of them, with the ‘Yes’ selection on the distance prop going 7-2 for +5.57u profit so far in his UFC career.

Jamahal Hill picks up the 2nd round standing TKO finish over Ovince Saint Preux. Hill was the -170 favorite going into the fight, but managed to cash at +170 to win ‘Inside the Distance’. Since coming into the UFC in 2019, Hill has finished 3 of 4 bouts and has profited ‘Hill: Inside the Distance’ backers +5.85 units.

Gabriel Benitez picks up the 1st round stoppage over Justin Jaynes, cashing as a -217 favorite on the moneyline, but at +162 ‘Inside the Distance’. With the victory, the favorite in the UFC Men’s Lightweight division has gone 86-40 since the start of 2019.

Roman Dolidze picked up an entertaining decision victory over John Allan as a -181 favorite. Dolidze cashed at +545 to win by decision, with the majority of bettors taking the Georgian to win inside the distance. With the win, both favorites in the UFC Men’s Light Heavyweight division cashed tonight, improving to 48-28 since 2019.

We’re right back to Vegas next Saturday for UFC 256