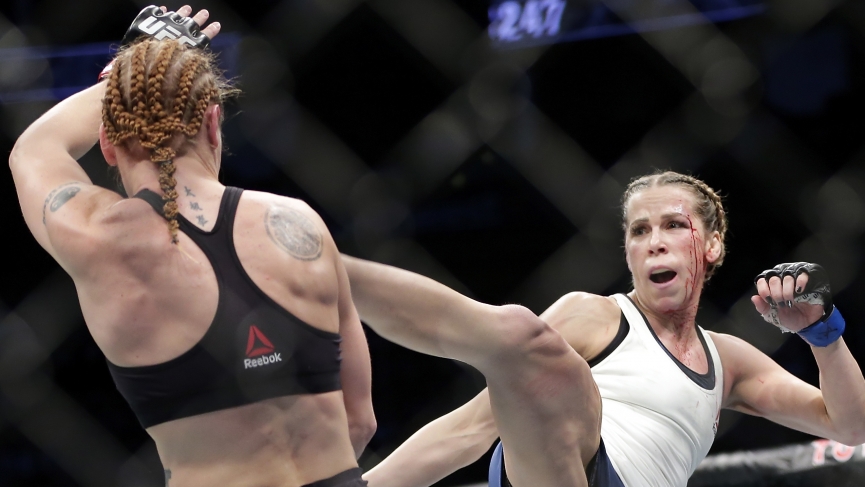 The most profitable trend on the UFC Fight Night 176 undercard is the underdog in the UFC Women’s Flyweight Division. Katlyn Chookagian is dog paying $1.25 on the dollar as the #2 ranked fighter in her division. She takes on Antonina Shevchenko (#12). The dog barked in the Women’s Flyweight at a 18-28 clip for +4.55 units, over the last 18 months. The underdog 6-3 for +10.42 units since the start of 2020.

It is the perfect storm, with possibly the wrong fighter favored and the trends pointing in the dog’s direction. The ‘Blonde Fighter’ Chookagian is the best bet for trend bettors on the prelim card this Saturday. Let’s take a look at the rest of the division trends active for the preliminary card of UFC Fight 176.

The ‘coin flip’ underdog in the UFC men’s Featherweight division has gone 20-13, for +8.24 units over the last 18 months. Vince Morales is a +100 underdog vs the bantamweight Chris Gutiérrez, as he steps up for a Featherweight Division bout to kick off the UFC Fight Night 176 prelims. 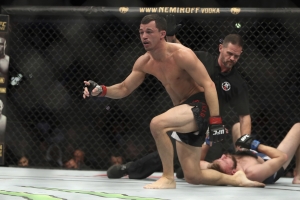 Spike Carlyle is a +130 underdog vs Billy Quarantillo, who is slowly reaching the -150 average at sportsbooks across the board. I expect Quarantillo closes somewhere in that -150 ‘coin flip’ range. Taking a shot on Carlyle at plus money, is definitely be warranted, especially based on the trends.

When it comes to these coin flip trends, as always, wait until post time before getting involved. You don’t want the odds to flip on you, and you be on the wrong side of what would otherwise be a coin flip fight.

The Over prop in the featherweight division has hit at a 62.5% rating, going 45-27 for +1.39 units over the last 18 months. The Over 2.5 rounds prop in the Gutierrez/Morales fight is currently -333. At 62.5%, the break-even point on this trend would be at about -167. So the Over here isn’t really worth a shot. However, in the Quarantillo/Carlyle fight, the Over 2.5 rounds prop is currently +124. By simply going off the division trends, the Over 2.5 here at plus money is definitely worth a bet. Don’t wait for the closing number to get involved in this one.

The former Tachi Palace Fights Flyweight champion Casey Kenney, takes on Louis Smolka, in a bantamweight bout listed as the second on the preliminary card.

The Over in the UFC Men’s Bantamweight division has gone 54-26 for +6.4 units, since January of 2019. However, the ‘Over 2.5 rounds’ prop in the Kenney/Smolka fight is currently at about -265 on the betting board, I would be hesitant to lay anything over -200 on this prop unless it was for the purpose of a recreational parlay.

There have only been 25 flyweight bouts in the UFC over the last 18 months. The Over prop has hit at a 60% rate but has not been profitable to bet across those 25 fights. However, the Under prop has gone 10-15, for a small profit of +1.72 units. In the Elliot/Royval fight, the Under 2.5 rounds prop is currently sitting at about +115 at various sportsbooks. With Elliot being a UFC veteran, taking on the UFC rookie Royval, you gotta think there is value on a stoppage happening within the first 22.5 minutes of this fight. I definitely like the Under at plus money in this one.

The Underdog has gone 10-14-1, for a small profit of +0.36 units in the UFC Men’s Flyweight Division. Having known very little about Brandon Royval coming into this fight, I still think the right fighter is favored here. If you were going to play the trends and take the underdog in this one, I would highly suggest betting no more than 1% on Royval, who may be outmatched in this one. The trends say, dog or pass for me on this one.

Jamahal Hill takes on Klidson Abreu in a light heavyweight bout on the UFC Fight Night 176 prelim card. The Underdog in the UFC Men’s Light Heavyweight Division has gone 21-32-1 for a profit of just +1 unit over the last 18 months. With Klidson as the underdog in what looks to be a ‘coin flip’ fight, based solely on the trends, I think there is value on Klidson in this one. The Over prop has hit at a 51% rate since January 2019, going 28-25-1, for just +0.18 units profit. At 51.8%, the implied probability ‘break-even point’ on this trend is at about -107. With the over in this fight currently sitting at -185, it seems that the Under is actually the value play. With the Under hitting at a 48% rating over the last 18 months, you are getting a decent amount of value on an ‘Under 2.5 rounds’ prop at +160 in this one. I think it’s plus money or pass for me when it comes to the winner and total in this one.

The UFC’s #2 Women’s Flyweight contender Katlyn Chookagian takes on Antonina Shevchenko in the feature bout of the UFC Fight Night 137 preliminary card. Chookagian is coming off a loss to the UFC Women’s Flyweight champion Valentina Shevchenko and is now fighting her sister Antonia in a bounce-back bout. Chookagian is almost a top 10 pound for pound women’s fighter in the UFC, currently sitting ranked as #11. Antonina Shevchenko is ranked #12 in the UFC women’s flyweight rankings and maybe outmatched by Chookagian in this one. I think the buying power of Shevchenko’s name has her as the favorite in this one, but I think the wrong fighter is favored here. The Underdog in the UFC Women’s Flyweight division has gone 18-28 for +4.55 units over the last 18 months and has gone 6-3 for +10.42 units since the start of 2020. I would highly suggest jumping on Chookagian at plus money here, as she may end up the favorite by the time these odds close.

The Over has gone 33-13 for +0.08 units over the last 18 months. However, unfortunately for blind backers of this trend, the ‘Over 2.5 rounds’ prop in this fight is currently sitting at -535. Based on implied probability, with the Under hitting at a 28.26% rating since January 2019, there is value on the Under here at +420, but I wouldn’t bet anything beyond 1% of your bankroll on it.