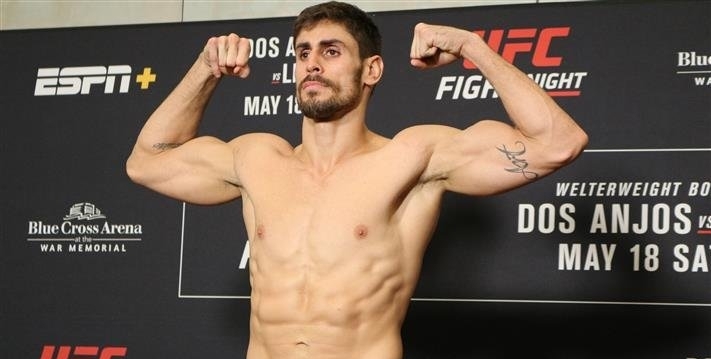 Tavares (17-6) hasn’t fought since a first-round TKO loss to Edmen Shahbazyan at UFC 244 in Nov. 2019. The 33-year-old looks to avoid three-straight losses for the first time in his career.

Carlos Junior (10-4, NC) also didn’t fight last year like his opponent and most recently lost a split decision to Uriah Hall at UFC Vancouver in Sept. 2019. The American Top Team product has gone 7-2-NC in the Octagon since joining the UFC in 2014, boasting six wins by submission.

Both have long layoffs so it’s tough to gauge exactly what type of fighters we’ll be seeing on Saturday night. Tavares will likely want to keep this fight on the feet and look for a knockout, while Carlos Junior will undoubtedly look to get this fight to the ground. With Carlos Junior having a slight height/reach advantage in the matchup and being a bit younger, I do see him having value over Tavares and potentially stealing away a decision. I’ll pick Tavares since he’s fought better competition, however Carlos Junior could pull this off and I do see value at betting odds of +115 if you’re looking to bet this fight.

McMann (12-5) looks to make it two-straight wins for the first time since Feb. 2017 when she battles Pena on the prelims. The former UFC title challenger most recently defeated Lina Lansberg at UFC Raleigh in Jan. 2020, which snapped a two-fight skid.

Pena (9-4) is coming off a third-round submission loss to Germaine de Randamie, which dropped the 31-year-old to 1-2 in her last three fights. “The Venezuelan Vixen” has gone 5-2 in the Octagon, with both of her losses coming against former or current UFC champions.

This is a really close fight in the bantamweight division with McMann having a clear edge in wrestling, while Pena is the better grappler. One area of concern is McMann’s age, being 40-years-old compared to Pena at 31. We’ve also seen mental lapses from McMann, especially in the Marion Reneau fight where she was submitted in the second round. While I do think the wrestling may be too much for Pena to handle, I can see Pena pulling off the upset here, potentially by submission. That’s why I do see value on Pena as the +110 underdog.

Muradov (24-6) steps into the cage for the first time since Dec. 2019 when he battels Sanchez on the prelims. The 30-year-old carries a 12-fight win streak into the bought and last competed against Trevor Smith at UFC on ESPN 7, where he finished his opponent in the third round.

Sanchez (12-5) is coming off a highlights reel victory over Wellington Turman at UFC Fight Night in Aug. 2020, knocking out the Brazilian fighter in the first round. The Tristar Product has won three of his last four fights, with his lone blemish coming against contender Marvin Vettori at UFC Tampa in Oct. 2019.

Despite a clear edge in experience, I favor Sanchez in this fight and do see plenty of value at +120. Sanchez’s standup has improved tremendously since winning The Ultimate Fighter in 2016 and we saw that on display in his last fight. Even if Murdaov finds success in the striking department against Sanchez, he won’t be able to compete with “El Dirte’s” wrestling over the three-round affair. That’s why I’m picking Sanchez in this spot as the +120 underdog.