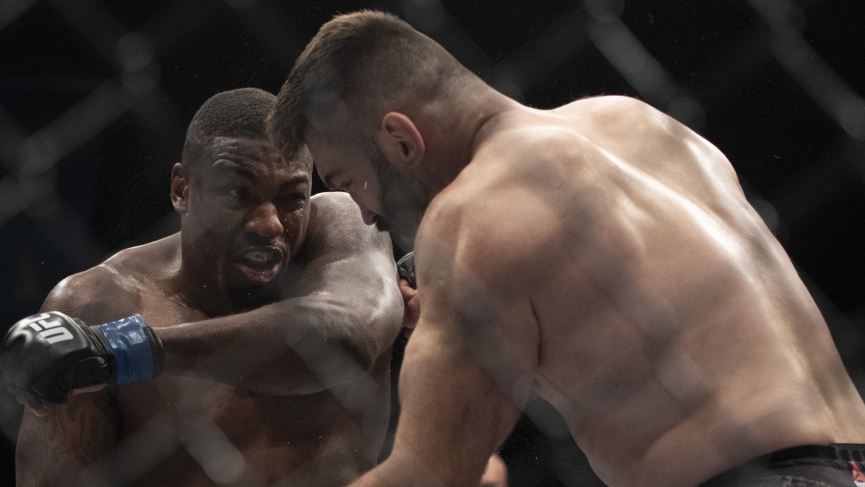 With two UFC events are already in the books, this week of MMA action wraps up on Saturday. At first look at the UFC picks below, there are intangible factors involved in this main event, that can’t be quantified. Sometimes, MMA is not a sport that can be broken down with just stats or trends, this is one of those times. Here is an early trend betting guide for UFC 172.

The welterweight underdog has been a profitable trend to back over the last 17 months, likely because of the overall popularity of the division. Fighters have their betting prices inflated by the public, which is what gives the underdog in this division so much value. As far as this fight goes; Matt Brown comes in as a twelve-year UFC veteran, having made his debut with the promotion all the way back in 2008.

Miguel Baeza is a ‘Dana White Contender Series’ graduate, with just one UFC appearance. I think there is a reason why Miguel Baeza is such a long favorite, currently sitting at -200 at WilliamHill. This is one of those fights where some further digging might be needed, as the tape isn’t fully out on Miguel Baeza, a relatively unknown fighter. With the over 1.5 rounds currently sitting at -125, I think there is far more value backing the over in this one than there is on the underdog.

The underdog has had some recent success in the UFC Women’s Flyweight Division. With recent upset wins from Roxane Modafferi (+567) and Lauren Murphy (+246); the flyweight dog in the women’s division has started 2020 strong, going 6-2, for +11.42 units. Corney Casey debuted in the UFC in 2015, while Borella didn’t make her debut in the UFC until 2017. Casey may be the more experienced of the two in the octagon, but at the end of the day, she’s an 8-7 career pro, taking on a 12-7 underdog. At first look, this could be a case of the wrong fighter being favored. I think there is a ton of value on Borella at +130 (via WilliamHill)

Cláudia Gadelha is currently well outside of the ‘coin flip’ range and with good reason. Three of Gadelha’s four losses in MMA come against former UFC champions in Joanna Jędrzejczyk and Jéssica Andrade. Angela Hill is on a roll right now, but I think the right fighter is favored in this one. With the favorite in the UFC Women’s Strawweight Division winning at a rate of 71% (29-9-1, +4.14u), implied probability says that there’s value on the favorite at a price as high as -245. Currently, Claudia Gadelha sits at -180, meaning there’s a small dash of value backing her here.

As for the total, the ‘Over’ prop in Women’s Strawweight has hit at a 77% rate over the past 17 months. That percentage suggests that any ‘Over’ prop, at a price of -335 or better has value. Currently, the Over 2.5 sits at -335, which is exactly where it should be, as far as ‘true odds’ would dictate. I think this fight has less of a chance to go over the 2.5 rounds than the Casey/Borella fight. Simply because apart of me anticipates Gadelha being able to stop Hill. At first look, a $100 bet to pick up $56 on Gadelha to win outright at -180, seems like the best way to approach this fight.

Both of these fights currently have the ‘Over 2.5 Rounds’ prop sitting at around -185. While the ‘Over’ has been hitting at a 69.8% rate over the last 17 months, implied probability says any ‘Over’ in this division at -230 or better has value. It’s hard to lay -185 on these bouts getting to 12.5 minutes of fight time. While both Anders and Jotko are Jiu-Jitsu practitioners, the common outcome when two ground-oriented fighters meet, is more or less always a ‘stand and bang’ slugfest.

In the other fight, Kevin Holland is a dangerous kung-fu style striker that went toe to toe with Thiago Santos for 15 minutes at UFC 227, losing by decision. Just like Holland, Anthony Hernandez is a ‘Dana White’s Contender Series’ prospect, although I think Holland’s striking is far superior to Hernandez. Even though the trends and the odds suggest ‘Over’. I can’t see either of these fights going the distance.

We have two ‘coin flip fights’ in this division on Saturday, luckily for bettors, the ‘coin flip underdog’ in the UFC Men’s Featherweight Division has been a profitable trend to back since the start of last year. I think there is a decent amount of value on Dan Ige at +113. As for the Darren Elkins/Nate Landwehr fight, I would prefer to wait and see where the money takes the odds. Being on the side of plus money on a fight that is too close to call, is always the best route to take.

As for the total, the trends say that the ‘Over 2.5’ prop in this division has value at the price of -155 or better. Based on that, the only fight in that price range is Song Yadong vs Marlon Vera, with the Over 2.5 currently sitting at -117. While Yadong is a BJJ specialist, he also has impressive sansho style striking, that could put an end to this one fast. At first look, Yadong vs Vera seems like the best ‘Over’ bet to make at featherweight.

The first and last fight of the night on Saturday will be out of the UFC Heavyweight Division. Rodrigo Nascimento and Don’Tale Mayes are both almost brand new to the UFC, with Mayes being the only one of the two having fought on a non-‘contender series’ fight card. Without doing any major research just yet on these two relatively unknown fighters; I would have to lean with taking a shot on the trend and taking the underdog in a coin flip fight.

Meanwhile, to the surprise of many casual bettors, the ‘Over’ prop in the heavyweight division has been profitable as of late. Over the past 17 months, the over has gone 30-25 for negative units but has managed a profit of +1.92 units since the start of 2020, going 7-5 since January. With a 54.5% win rating, the ‘Over 1.5 Rounds’ prop has value at heavyweight at around -120. Both of these heavyweight bouts see the ‘Over’ prop currently sitting outside of that -120 range. In my opinion, the best way to approach this is to wait for casual money to come in on the ‘Under’, and get involved on the ‘Over’ then.

As for the main event, the favorite has won 56% of heavyweight bouts in the UFC, since January of 2019. However, betting on the heavyweight favorite has been a losing venture overall. Even with a +.500 record of 31-22-2, the favorite is down -6.62 units over the last 17 months. As for the underdog, the plus money side has cleaned up as of late, going 3-3 +2.29u in the six heavyweight bouts, since UFC 249 last Saturday. Based on a 40% win percentage, implied probability says that any underdog in the UFC at +150 or better is worth betting. However, Walt Harris is not an opponent you want to be going against as a bettor. I suggest digging deeper into handicapping this one and rely on the trends with the lesser-known fighters.

My initial take is that there’s no good reason to be on the side of Overeem here, but there is likely no value on Harris unless he reaches -150 or better. Hopefully, the casual bettor will come in on the popular name of Overeem on Saturday, but for now, it’s a ‘wait and see’ type situation. Steer clear of the underdog in Harris vs Overeem.