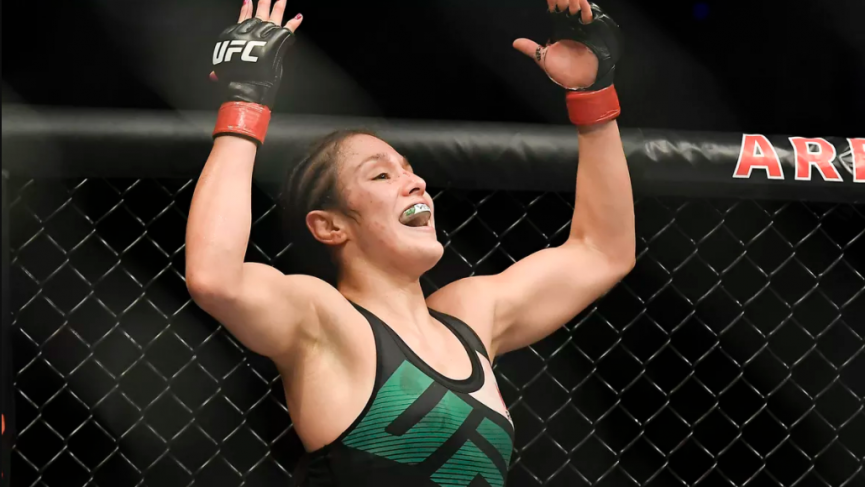 The UFC must believe heavily in young Maycee Barber’s drawing power because this is a co-main event fight for UFC 258, that I do not understand. Don’t get me wrong, I am a fan of women’s MMA, and I have been impressed with both Alexa Grasso and Mayce Barber, but slotting them into the co-main event spot is more than a little surprising. Regardless of where it is on the card, this fight should be fun, and as usual, I have a hot take for you.

The Fighters: Barber vs Grasso

Maycee Barber is the UFC’s newest darling. She is “The Future,” and the UFC seems to agree. Even though Maycee tasted defeat at the hands of UFC veteran Roxanne Modafferi in her last outing, she has been a wrecking ball so far in her young career. Maycee is rugged, raw, and has a power rarely seen in the women’s 125-pound division. It will be fascinating to see how she bounces back from her bad injury and her first loss and if she will live up to the UFC’s hype machine.

Alexa Grasso is an extremely talented boxer who has good technique and fast hands. She has been working her way through the UFC much longer than Maycee has, but now she finds herself in a prospect vs. prospect showdown under the bright lights. Grasso has alternated wins and losses so far in her UFC career and is looking to put it all together and make a run at the division.

The Match-Up: Barber vs Grasso

This fight is going to be a banger as long as it lasts. I fully expect that after a year off, even nursing an injury, Maycee Barber should show improvements in her game. Barber is a raw and powerful fighter who relies on her physicality to bully her opponents and beat them into submission. You have to feel like the UFC is keeping a close eye on her and would not put her in this position without feeling confident that she is up to the challenge. And that makes me wonder: why is she the betting underdog?

I am a big fan of Alexa Grasso and her sharp boxing. I am also a fan of fading fighters who are taking a step up in competition. While Barber is coming off a fight with Roxxy, and this wouldn’t be considered a step up, we cannot deny that Grasso has far more experience fighting high-level fighters than her opponent. Grasso has faced the likes of Carla Esparza, Karolina Kowalkiewicz, Tatiana Suarez, and Randa Markos. While Barber has faced relative unknowns and lower caliber fighters like Hannah Cifers and JJ Aldrich, while also defeating Gillian Robertson in a fight that Robertson just wasn’t herself. Grasso has been facing quality opponents and having to sink or swim. The issue for Grasso has been the grappling of strong wrestlers. Unfortunately for her, Barber is a big physical woman who knows how to wrestle.

UFC 258 Co-Main Event Best Bet – Barber/Grasso Under 2.5 (+200) via Bet365: When watching the tape on these two women, I discovered something. Both of them have high output and carry plenty of firepower. They both also have some defensive tendencies that leave them open. Barber drops her hands and is willing to give a big punch to land one, which leaves her open for damage.

When Barber faced JJ Aldrich, she was on the wrong end of 8 minutes until she had enough and turned the tables on JJ using that raw physicality that we talked about. While the more technical of the two, Grasso still has a bad habit of letting her right hand dip and gets hit with left hooks pretty regularly. When you see both women’s ability to hit hard and get hit in return, I think we have a rare opportunity for a finish. R

ather than taking a side here, I am going to take a shot on the total. I am playing under 2.5 rounds in this fight, and I am expecting one of these women to show that they are a class above the other, and I expect it to be done violently.