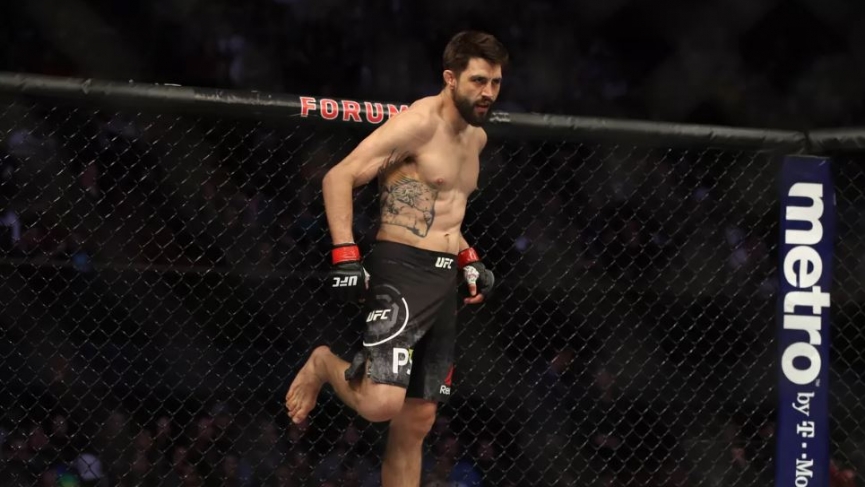 Matt Brown vs Carlos Condit Predictions | UFC Fight Island 7 | Diehard MMA Podcast: The main event of UFC Fight Island 7 is an absolute banger, and the co-main event should set us up for it as a violent and entertaining appetizer. Carlos Condit and Matt Brown are legends of the UFC and have been on the roster forever. Neither man is known for being in boring fights, and both bring a kill or be killed mentality to the cage.

The Natural Born Killer Calor Condit is a man who once touched gold in the UFC’s 170-pound division. Now that he is more on the retirement track, it seems the UFC has started giving the former interim champion more reasonable fights and matchups such as the one on Saturday afternoon on Fight Island.

Condit has a solid stand up and a vast arsenal of strikes combined with a slick submission game. Even though we think of Carlos as a knockout artist, off his back, Carlos has been extremely dangerous in his MMA career, notching 13 submission victories. The concern with Condit is how much gas he has left in the tank. Condit was able to snap a five-fight losing skid in his last fight with a win over Court McGee that seems to have him trying to get back on track.

Like Condit, Matt The Immortal Brown has had a rough go of things in the past few years but has recently put it together. Brown is coming off a bad 2nd round knockout loss against Miguel Baeza in May, but before that had won 2 straight, both by finish.

Brown is a violent power puncher and has nasty kicks and elbows combined with solid offensive grappling. Even in his loss to Baeza, Matt Brown had the young gun on the ropes early in round 1, showing he still can give that veteran lesson to the next generation if they are not of a certain caliber.

As much as I would like to praise both men and have been a fan of them and their wars, this is a high-level ‘loser leaves town’ fight. Carlos Condit is 1-5 in his last 6 with an uninspiring win over a fellow aging veteran grinder in Court McGee. Brown is 2-4 in his previous 6, with only his last two fights mattering. After his walk-off KO win over Diego Sanchez back in 2017, Brown retired but returned to action in 2019 and has gone 1-1 since.

Matt Brown somehow seems to have still retained his violent tendencies and is the more dangerous of the two at this stage of their careers, in my opinion. Carlos Condit may have the more flashy striking, but he also has a massive, glaring weakness. Condit has a 36% takedown defense over his MMA career and is well known for being comfortable playing off his back and giving up dominant positions. The issue there is that Condit is like a coiled snake on the floor. Entering his guard is by no means a safe approach to fighting him.

On the feet, I expect this fight to be competitive with Condit turning back the clock to when he defeated Nick Diaz. I expect Condit to play the matador and try to counter strike against the heavy-hitting Matt Brown, but that is a dangerous game to play. It would not shock me if Brown attacked Condit’s weakness and took this fight to the floor at some point, looking to unload with significant ground and pound and slicing with elbows. That will put Brown right into the path of Condit’s most prominent offense and open the door for the former champion to snatch another submission win, which is likely why the odds sit where they are, with Condit as the clear favorite.

UFC Fight Island 7 Co-Main Event Best Bet – Condit/Brown Under 2.5 Rounds (+100) via Bet365: Both men can finish this fight, and with their age and durability concerns climbing, I am hard-pressed to say that either of them can withstand the output the other is capable of. Matt Brown should push the pace here and rarely escapes the 2nd round, much less getting to the judge’s scorecards. Matt has only seen the judges in 6 of his 39 MMA fights. I think these men will reach a fever pitch of a battle where there is no turning back, and whether it is by knockout or submission, somebody is going to sleep. While I have a slight lean to the high-level fight experience of Carlos Condit in this fight, there is no way I can trust him at this line. The way I would look in this fight is the under and pray for a war!