Magomed Anklalaev vs Ion Cutelaba pick is my underdog pick for UFC Vegas 8 which is the exact opposite of UFC Vegas 7. Last week we had super close sketchy fights that really could have gone either way. Underdogs were easy to find and take swings on, but this week we have very wide lines. You have underdogs on 8 out of 10 fights that are in the +200 range. You may think that would make it easy to pick a good dog, but honestly, more often than not, I am siding with the favorites this week so it’s a harder task than you would expect.

Magomed Ankalaev is a hot prospect out of Russia whose lone loss is a buzzer-beater against the submission ace Paul Craig. Magomed is a powerful striker who focuses on kicks and range management. Magomed picks his opponents apart over the course of a fight and more often than not puts them away late after they have nothing left to give.

Magomed Ankalaev is a hot prospect out of Russia whose lone loss is a buzzer-beater against the submission ace Paul Craig. Magomed is a powerful striker who focuses on kicks and range management. Magomed picks his opponents apart over the course of a fight and more often than not puts them away late after they have nothing left to give.

Ion CutelabaIon Cutelaba is The Hulk and is an absolute wild man. Hulk is a special kind of crazy and unleashes on his opponents with reckless abandon every time he is in the cage. More often than not Ion breaks his foes and lands massive knockouts, but when he runs into a durable and experienced fighter he can be out-finessed.

Okay, this is the early strike against Ion. Ion has several times thrown illegal strikes that had they landed would have gotten him disqualified or a point deducted and that makes him hard to trust. In the last fight against Magomed, he played possum so convincingly that the official actually stopped the fight thinking that he was hurt when in fact he hadn’t even been struck. This is a crucial part of the criteria that I normally refuse to bend on, but in this case, that line can make up for the risk.

Ion has only 1 KO loss on his record and it’s not at all what you would think. I mentioned the previous fight between these two men and the early and unfortunate referee stoppage and well… that went on Ion’s record as a TKO loss. Ion has never truly been knocked out and while he has been rocked with big shots from power punchers like Glover Teixeira and Jared Cannonier that giant noggin has never actually been cracked. I have no concerns about the chin of this man even against a power striker like Magomed.

Ion never stops coming forward. This man’s forward pressure is borderline reckless and this continues all the way until the final bell. The only time he has actually been handled is when he is up against an opponent with superior cardio and a submission advantage. Even a big power striker like Cannonier was unable to get him out of there when Ion gassed out. The man will fight every second looking for that big bomb to end the fight.

We don’t really even need to address this one. Ion is power incarnate. The man is called “The Hulk” and is shredded beyond belief. Ion has a 93% finish rate with 12 wins coming by KO/TKO and he is brutal if he can get his opponents on their backs. Especially early Ion packs a punch and uses raw power to crush whoever is trapped in that cage with him. 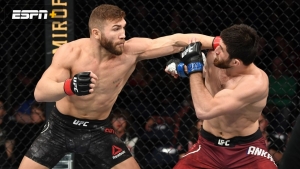 Ion is definitely the kind of fighter that you want to bet as a dog rather than as a favorite. The last time these two men fought I bet against Ion, but I had Magomed around -200. We know full well that KO loss was fraudulent but somehow this line went on +180 on Ion to +325!! This has become a full-on dog or pass situation. There is value with big favorites, but I do not believe there is value on this one at -333. Some smart people out there realized that nothing has changed in this fight besides the date and Ion sits around +250 right now, but that is still almost a full dollar of extra value. The only weakness that Magomed has is power punchers with decent boxing and that is exactly what Ion brings to the table. I am extremely tempted to take a flier on Ion at this price, but I will be honest with you… I am waiting for the weigh-ins.

I want to see how these men size up and the shape they are both in. If Magmoed looks any worse for the wear I will absolutely take that shot on Ion. He will be coming out hot after being robbed the last time these men met in the cage and as always look for that finish. The only concern I have is should this fight drag out. The longer the fight goes the more it will favor Magmoed. Be warned that if you take this play it’s extremely risky and not one I would suggest parlaying or going hard on, but if you are looking for a light sprinkle for some action Ion is your man.

Keep an eye out on my Twitter @Diehardmmapod on Friday after I see the weigh-ins to see if this becomes a full unit bet or if we just leave it as a sprinkle for a little fun.