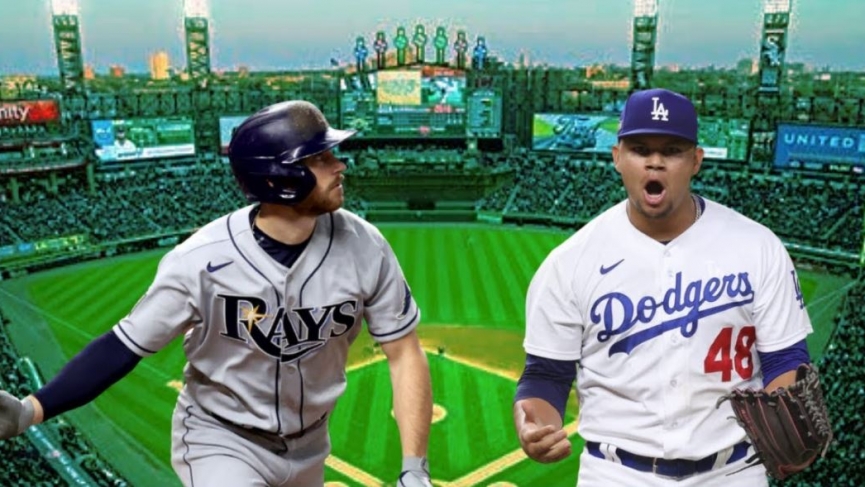 Odds.com’s LA Dodgers vs Tampa Bay Rays Pick – Game 4 World Series: A pair of lefthanders on the mound for Saturday night’s fourth game of the World Series between the Dodgers and Rays.

For those of you who are actually listening to Joe Buck during the 2020 World Series, brace yourself for a barrage of the phrase ‘pivotal Game 4’ when the Los Angeles Dodgers and Tampa Bay Rays take the field Saturday night. I’ll never hear it myself, on account of buying the deluxe television with a mute button.

Buck’s voice will be booming across the FOX airwaves for the 8:08 p.m. (ET) matchup at Globe Life Park where the Dodgers own a 2-1 lead in the Series. They’ll try to gain a stranglehold on matters with young Julio Urias (7-0, 2.66) on the hill, the Rays hoping to knot things up behind Ryan Yarbrough (2-4, 3.52) in the double-lefty duel.

s it has been for the first three games, Los Angeles is again a decided favorite with Bet365 carrying the Dodgers on a -170 moneyline. The return on Tampa Bay is +150, and scoreboard bettors are faced with a decision on an 8-run total.

Los Angeles gained the 2-1 advantage with a relatively easy 6-2 decision on Friday. Walker Buehler kept Tampa Bay hitters quiet for the first six innings, surrendering just one run on three hits while striking out 10. The 10 Ks marked the first time in World Series history that a pitcher reached the double-digit plateau in just six innings.

Dodger hitters, meanwhile, came out strong to build a 5-0 lead through the fourth inning. The Los Angeles lineup scored in a variety of ways, knocking a couple of baseballs out of the park, plating a few on simple singles and also crossing the dish via the sacrifice bunt. The final was just enough to get past a 7½-run total, the third time in as many games for the score to go ‘over’ the MLB odds.

‘Under’ Has Cashed In Yarbrough’s Last 4 Starts

Urias has been something of a good luck charm for the Dodgers this postseason, and ATM machine for bettors playing LA in games he pitched. The 24-year-old has earned the win in each of his four appearances, only one of those as a starter. In 16 postseason innings, Urias has allowed just one run, that coming on a solo shot by Atlanta’s Christian Pache in a 15-3 rout for Los Angeles in Game 3 of the NLCS.

He faced the Rays twice in 2019, both appearances coming out of the bullpen. Urias overmatched Tampa Bay hitters in those games, working a scoreless inning in both outings while allowing just one hit and striking out five.

Yarbrough is also making his second postseason start, and fourth appearance overall when he climbs the hill for tonight’s contest. He appeared in Tuesday’s Series opener out of the bullpen, getting a couple of outs to end the decisive 4-run fifth inning for Los Angeles in the 8-3 final. The 28-year-old had previously worked five innings in his two playoff outings, one of those out of the bullpen during Game 3 of the ALCS against Houston. Tuesday’s outing accounts for Yarbrough’s entire career history against the Dodgers.

Gooch To Have Dish In Game 4

Up next to call balls and strikes for Bill Miller’s crew is Chris Guccione. The Colorado native just finished his 21st season, and really had no trends in his 12 regular season contests that finished 5-6-1 O/U/P with home teams and visitors splitting straight down the middle.

Guccione is working his third postseason series of this October, and 18 th postseason series overall. He was part of the NLWC set between the Brewers and Dodgers, never being called on at the dish. Guccione also was part of the NLDS crew between the Marlins and Braves and failed to have the plate in that series. Saturday will be his second World Series plate assignment, having donned the mask for Game 2 of the 2016 Fall Classic, a 5-1 Cubs win over the Indians that came up short of the total.

The best current price on the Dodgers -1.5 Run Line is at Fanduel at -104. Thanks to a cold front that moved through the Dallas-Ft. Worth area on Friday, they had the roof closed for Game 3. Major League Baseball wants the roof open whenever possible for the playoffs, but it might be closed again Saturday when the forecast calls for a first-pitch thermometer reading of 59°.

My expectations are Dave Roberts will have the Dodgers coming out aggressive at the plate and on the bases in hopes of gaining a quick advantage to really put the pressure on the Rays. My only concern is if Roberts calls on Kenley Jansen to pitch in a save situation come the ninth inning. I’ll cross my fingers Los Angeles has a 4+ run lead by then.