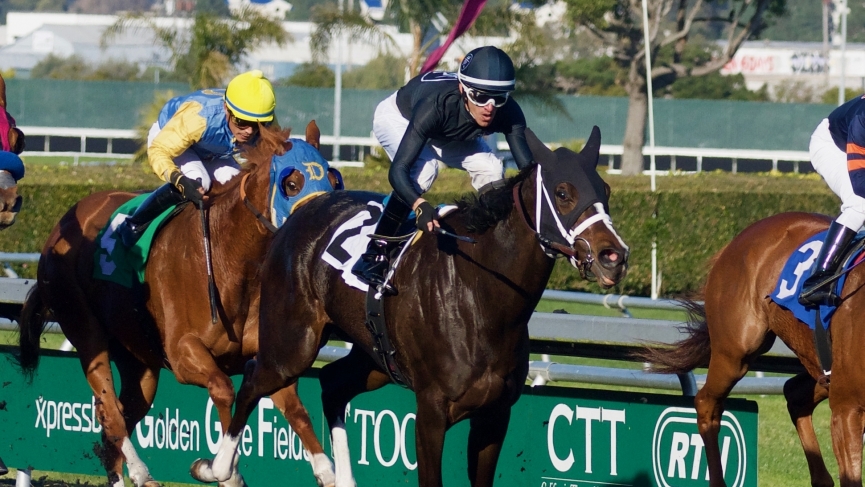 Yesterday at Saratoga Viadera took to the turf listed as good and used a strong stretch rally to win the De La Rose. In the Shine Again, Indian Pride went off at a generous 2-1 from her 6/5 morning line and won to give her trainer Chad Brown a third win on the card. It was visually impressive as she set the pace, appeared to lose the lead on the turn to long shot Joy Epifora, put that horse away, then lost the lead to contender Blamed in the stretch but fought back to win. For today we will take a closer look at my Monmouth pick and my Woodbine and Saratoga best bets.

Today’s feature comes from Monmouth the grade one Haskell for three-year-olds. Many consider Honor A.P. and Tiz the Law to be the top two contenders for the Kentucky Derby and the horses who finished second to them in their last race, Authentic and Dr Post, will be the two favourites in the Haskell. It’ll be interesting to see who can validate their race. Let’s look at some races,

The Monmouth 10th is the grade three Monmouth Cup going 1 1/8 miles on dirt for three-year-olds and up. Perhaps morning-line favourite Monongahela can rebound off a poor effort in the grade three Westchester but it was his first start since leaving the disgraced Jason Servis barn. Until he runs well for a new trainer don’t see a reason to take him at a short price and today’s distance has proven to be farther than his best.

I’m also against Bal Harbour who is coming off a seven-month layoff and has also been unable to finish races at today’s distance. Just Whistle has a win at today’s distance two starts ago when he beat Spinoff. The problem with him is I don’t consider Spinoff a strong reference, that win likely isn’t good enough and yet it is the only race that would make Just Whistle remotely competitive.

Bodexpress has lost ground in all of his races at today’s distance but he wasn’t able to establish the lead in any of them. An important factor considering both his wins has come with clear leads. On paper, he looks fast enough to make the front but it’s never easy clearing from an outside post and if he does clear, it’ll likely be with a quick opening quarter and you have to wonder what effect that will have later in the race. Nevertheless, he’s my alternative.

The horse I want is Global Campaign (9/2 ML) as unlike many of his main rivals, he has done his best work at today’s distance including a break out performance in the grade three Peter Pan last year when he beat Sir Winston who won the Belmont next out. Yes, he could have shown more last time but he has rebounded from subpar efforts previously. His peak effort in the Peter Pan came off a subpar effort in his previous race.

The Woodbine 8th is the grade three Trillium for fillies and mares three years old and up going 1 1/16 miles on synthetic. Another Time is your morning line favourite and she is cross-entered in the grade two Royal North on turf one race later. I hope she runs here because in this spot I don’t like her. She would be trying the longest distance of her career after blowing a clear lead in the stretch in the grade two Nassau going a flat mile. While she has decent synthetic form, I prefer her turf form. 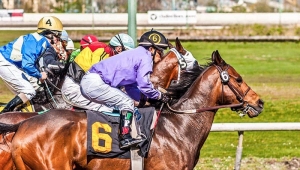 Art of Almost can win this race but she always takes money and on synthetic, she is not a standout. Similarly to Another Time, I prefer her turf form.

One alternative is Amalfi Coast who could be rounding into form in her third start off the layoff. The last time she was on synthetic she provided a career-best effort upsetting the grade two Bessarabian. The issue with her is that is the only race on synthetic that would make her competitive and it came at seven furlongs.

The horse I want is Souper Escape (10-1 ML) who has run on synthetic, at today’s distance once previously. It was at Woodbine in the La Lorgnette Stakes and she produced a career-best effort. Jockey Luis Contreras has gotten the chance to ride her both times she was at Woodbine thus he should know her well. She is third off the layoff and note of her wins, two have been at a mile and the other two at today’s slightly longer distance of 1 1/16 miles thus she should appreciate the stretch out.

The Saratoga 10th is the grade one Coaching Club American Oaks for three-year-old fillies going 1 1/8 miles on dirt. The main question is how good is morning-line favourite Tonalist’s Shape. She has won 6 of 7 races to date and yet she is adding blinkers. While blinkers might help her, I question why the connections feel the need to make changes when she has done little wrong to this point in her career.

Her two best races have come going one turn miles at Gulfstream and while she beat a good horse in Spice Is Nice three starts ago, she caught that horse at the right time. It was only Spice Is Nice second career start and her first attempting a route. While Tonalist’s Shape has an experience edge on most of her main rivals, those rivals do have positive winning experiences going two turns.

Tonalist’s Shape two-turn experiences include her only off the board finish and a win at 1/2 where she earned a 78 Beyer speed figure that simply would not be good enough. Perhaps she can win at today’s longer distance but to this point, she doesn’t have a race fast enough going two turns and as the favourite, I’m not curious to find out if she’s good enough.

The two main alternatives are Paris Lights and Crystal Ball. Nothing wrong with Paris Lights who was expected to win both her two-turn races and she did.

I simply prefer Crystal Ball (4-1 ML) who will likely be the better price. Note that her connections didn’t bother with a sprint race to begin her career. Instead, they went straight to a route so I don’t expect distance to be a concern. I can forgive the debut as it is always tough to win going a mile first time out. She did at least show an ability to pass horses in that race and then was more professional in her second career start. With a slight improvement in just her third career start, Crystal Ball can win this race.