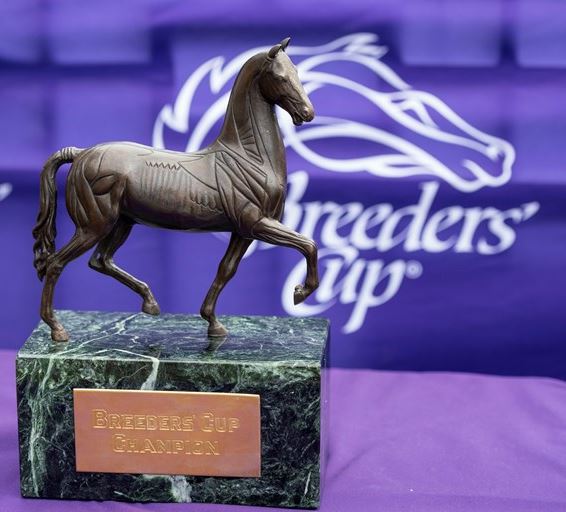 2020 Breeders Cup Picks and Predictions: The 37th edition of the Breeders Cup World Championship of horse racing begins on Friday. Day 1 of The Premier Event of the North American thoroughbred horse racing year. 14 races, two days, all taking place at Keeneland racetrack in the beautiful bluegrass backdrop of Lexington, Kentucky.

Odds.com’s Dennis Garcia has looked at the early betting favorite for each race on the card and gives an in-depth breakdown of why you should, or shouldn’t tail or fade the odds on favorite. Not to mention, there are a few long shots worth noting along the way.

Early Favorite – #14 Golden Pal: The first foal out of multiple stakes-winning dam Lady Shipman. He was a neck away from becoming a group two winner at Ascot and then dominated a Saratoga stake. He has yet to try rating and was scratched out of the Indian Summer earlier this month, a race that was projected to have plenty of early speed. Thought Indian Summer winner Bodenheimer was the speed of the speed that day, and he might be again in the Breeders’ Cup. I am curious to see how much more early speed is in the race, and with Golden Pal not having rated previously, it might be worth trying to beat him.

Early Favorite – #6 Mutasaabeq: took a step forward last time when switching to turf and winning the Bourbon stakes at Keeneland. He had a difficult post and went last to first, making an eye-catching 8-wide move around the far turn. His trainer Todd Pletcher won this race back in 2010 with Pluck, who made a last first move. Note that European-based horses and trainers have had ample success in this race as the Euros have won 8/13 editions.

Considering last time Mutasaabeq was trying turf, a route, 2-turns, and a new racetrack all for the first time it was a little surprising that he was sent off as the favorite which makes me question who did he really beat in that race? When looking for alternatives, I’ll likely start with the Euros.

*Note: #9 Battleground is now the (9/2) betting favorite as of Friday morning.

Early Favorite – #7 Princess Noor: has been a flashy winner in all three of her career starts in California. In her second start, she was a little fortunate to not be disqualified for interfering with her main rival at the start. She proved last time in the Chandelier that she could stretch out. I do question who she beat in those races and from a Beyer Speed Figure perspective, her races have come back slow relative to some of her competition on the east coast. Being undefeated and trained by Bob Baffert, doubt her price is ever fair enough to bet her thus, I’ll likely play against her.

Early Favorite – #4 Plum Ali: has won all three of her starts and took a step forward last time to win the Miss Grillo. She only had to beat four rivals that day thanks to scratches and the horse that finished second, Caldee, I was not a fan of as she had only beaten a weak field previously. After the scratches, not sure how strong that race was and didn’t love the fields Plum Ali previously beat. As an undefeated horse, she’ll likely take money and I’m inclined to play against her.

Dennis Garcia’s Long Shot – #3 Alda: This race has historically gone to team North America as outside of the Europeans winning back to back editions in 2012 and 2013; it has been all North America. Two weeks ago, I viewed Aunt Pearl and Lady Speightspeare as the top of the class, but the latter will miss this race with an injury. The horse who finished second to Lady Speightspeare last time in the Natalma, Alda, is worth considering at a price.

She broke her maiden at Belmont and then won the Catch a Glimpse at Woodbine, showing an ability to handle two turf courses that are very different. She likes to rally from off the pace and has been consistent in her efforts. She’ll need someone to challenge Aunt Pearl on the front end, but both Wesley Ward runners, Campanelle and Royal Approval, as well as Euro Miss Amulet might be able to ensure that honest pace. I view Alda as a win contender.

Early Favorite – #7 Jackie’s Warrior: has dominated back to back grade one races in New York beating Reinvestment Risk both times. He had a tactical advantage in both being left alone on the lead in short fields. He will have to answer the distance question as well as if he can handle 2-turns and with the larger field, I wonder if he gets a similar cozy lead. On talent he’s certainly capable of winning but at likely minuscule odds, it might be worth looking for alternatives.

Dennis Garcia’s Long Shot – #9 Sittin On Go: Yes, Jackie’s Warrior is top of the class, but this will be a much bigger field and tougher pace scenario than he has previously faced. Perhaps a different pace scenario will allow Reinvestment Risk to turn the tables. Essential Quality is the most likely upsetter but at a bigger price, consider Sittin On Go.

Sittin On Go went from a five-furlong debut to making a bold 5-wide rally going a mile in a stake at Churchill. He could win both his races doing nothing wrong, and his off-pace style should not hurt him in this spot. He was overlooked last time when sent off at 24-1 odds, and a similar situation could occur with other horses having flashier performances.