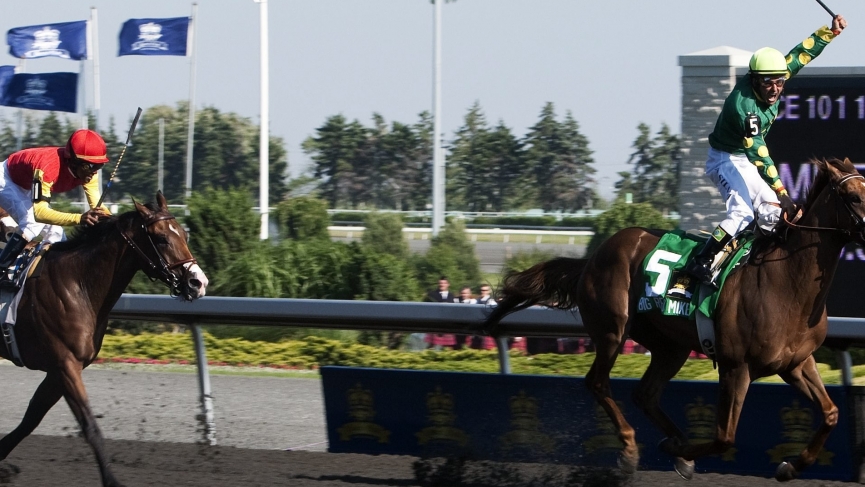 Odds.com’s Horse Racing Picks for Oct. 31st: Today at the racetrack, there are various stakes everywhere, including Belmont and Woodbine. Let’s look at some races:

The Belmont 6th is the Zagora stakes for fillies and mares three-year-olds and up going 1 ½ miles on turf. Morning line favorite Mutamakina comes over from France with Christophe Clement taking over the training. In France, she hit the board in her first five career starts, including a pair of seconds against group stakes company. However, since then, she has not been the same horse as she has failed to hit the board in her last four starts. Yes, the competition got tougher, but in three of those races, she was 7-1 or less; thus, there were some expectations that she did not deliver on. Her trainer does not have great numbers with overseas shippers, and while her best gives her a strong chance, she still has to prove she can handle North American racing. At a short price, I’ll take a shot against her.

Her new stablemate, Olympic Games, also came over from Europe and has competed three times in North America. Olympic Games has a pair of second-place efforts, including two starts ago, when she was the beaten favorite. Last time, she did no running and was given a small break. She can win, but I’d rather wait until she does it first before backing her.

Beau Belle likely takes the most money from the locals, having run in several graded stakes recently. My issue is she has been facing the same competition in those races routinely finishing behind Civil Union.  Think some of the new faces are better than the horses she has lost too and note she is just 2/24 with 11 slices, making her hard to trust on the win end.

The horse I prefer is
Luck Money (8-1 ML), who has taken a step forward in her last couple of starts. Two starts ago, she was a game third in a rich stake at Kentucky Downs going an extended route. That race came back live as the second and fourth place finishers both subsequently won graded stakes. Luck Money also came back to win last time over a turf course listed as ‘good.’ Considering it has been raining at Belmont throughout the week, it’s good to know she can handle a wet surface. She is still lightly raced thus is likely still improving, and at a fair price, I’m willing to find out if she is good enough.

The Woodbine 8th is the restricted Overstake for three-year-olds and up going 7 ½ furlongs on the inner turf. I am against morning-line favorite Not So Quiet, who will be competing at his longest distance to date. The speedy gelding can be really stubborn when he makes the lead, but with Forester’s Turn and others in this race, he may not get to the front. That, along with the distance question, makes him a play against.

I am also against Dixie’s Gamble, who makes his first start since last November. He won his lone turf event on the main Woodbine turf course, but that performance would not be good enough against this group. Perhaps he is ready to run a big race off the layoff, but his trainer Josie Carroll doesn’t have great numbers off layoffs this long.

Perhaps Royal Laser can win, and he is in the form of his life, having won two straight. He has won on the inner turf previously but is a stone-cold closer and don’t love that style for this turf course. Also, while he has done better in his last two starts, he is five years old, and this will be his 27th-lifetime start; thus, it’s unlikely that he continues to improve. Last time he won at 9-1, and today he’ll be a fraction of that price; thus, he’ll likely lack wagering appeal.

The horse I prefer is Eskiminzin (6-1 ML), who started the year by winning two straight. Since then, he was in an impossible spot in a grade two event. Subsequently, he ran in a graded stake on synthetic where he faced elite sprinter Pink Lloyd. Last time he ran into Silent Poet, who has won 4/5 races this year and has already won again, taking the grade two Nearctic a couple of weeks ago. This field lacks the standouts Eskiminzin has been facing recently, and with his tactical speed, he should have every chance to beat this group.

The Woodbine 9th is the restricted Princess Elizabeth for two-year-old fillies going 1 1/16 miles on synthetic. Morning line favorite Dreaming of Drew has been facing better horses on turf recently. She was a nose away from becoming a stakes winner two starts ago, and, last time, she contested the grade one Natalma. Her best race, however, came three starts ago when she broke her maiden on synthetic. Note that the race was only 5 ½ furlongs, and the Natalma was her longest race to date, where she was losing ground at the end. Today she has to get even more ground and, I don’t trust her to do so. As the likely favorite, I’ll play against her.

I am against Il Malocchio who, broke her maiden on turf last time in the Victorian Queen but, she had a lot go her way that day. She got a fast pace in a race filled with speed types. She also got a perfect trip saving ground on both turns and angling into the 2-path to get the victory. It isn’t likely that the pace will be as strong in this spot and, she is a question mark on synthetic.

The horse I prefer is Curlin’s Catch (3-1 ML) who, went a route in her debut against the boys and took plenty of tote support. She did not have an ideal trip as she was squeezed at the start and had to rally 5-wide. She can improve with that experience under her belt and should have a strong say in the outcome with a clean trip.