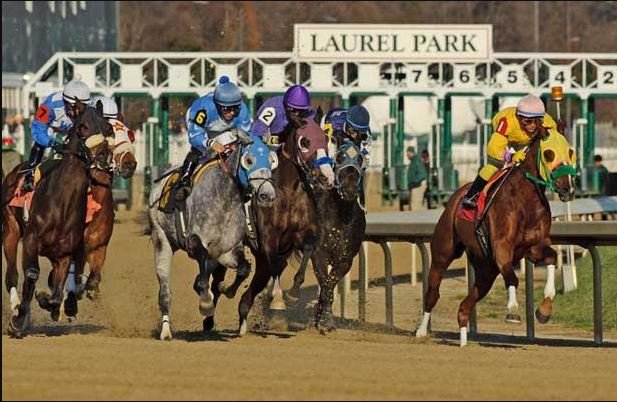 Odds.com’s Horse Racing Picks for Oct. 30th: Today at the racetrack, all major racetracks are running with hopefully some better weather as yesterday multiple tracks were rained off the turf. Let’s look at some races:

The Laurel 4th is an allowance optional claimer for fillies and mares three-year-olds and up going six furlongs on dirt. I am against morning-line favorite Positive Force who has a seconditis issue finishing second in 5/8 starts. This includes her last four races where she was sent off as the favorite each time while settling for second. Last time she picked up the services of top rider Trevor McCarthy but the result was the same.

Larimar and Brut Rose are both alternatives that I am against as their lone wins have been on the lead and don’t think either can get in front of Lookin for Candy in the early stages.

Lookin for Candy is an alternative I will use as last time she tried to lead every step of the way until tiring at the last moment. Note that race was at today’s six-furlong distance but previously she had been competing predominantly at 5.5 furlongs thus perhaps with the added stamina of her last race, she can be more thorough in this spot. The lone concern is, while she can likely get to the lead, the pace is expected to be contested.

The horse I prefer is Had the Notion (12-1 ML) who added Lasix two starts ago when in a more difficult spot. Last time she was in a race without much race flow and today’s pace figures to be more honest. Her good races give her a chance in this spot and at a fair price, I’ll take my chances.

The Churchill 8th is an allowance optional claimer for three-year-olds and up going 6 ½ furlongs on dirt. Morning line favorite Tough Love ran really well last time at this level when chasing 4-wide and losing by a nose when unable to catch a stubborn pacesetter who had everything his own way. He also provided a strong effort three starts ago in an allowance at Oaklawn. My issue with him is his level of performance in his other starts which tends to be inconsistent thus I’m not sure he’ll repeat his last effort.

I am against Sir Alfred James and Straight Shot who both finished behind Tough Love last time. They were both in similar spots to Tough Love and arguably had easier trips thus taking either to turn the tables and beat the new faces is unappealing. The one horse out of that race that deserves some consideration is Nifty who was in his usual spot well off the pace but that put him against the race flow. Should there be more pace this time his chances would improve but I am skeptical of that happening.

Of the new faces, Home Base is one alternative and he is capable of setting the pace and leading this field a long way. Ignore his last race as it was a graded stake and his previous efforts are fairly consistent and would give him a chance.

The horse I prefer is Night Time (8-1 ML) who was a game-winner two starts ago at Saratoga. In that race, he stalked from the outside and out-finished the favorite.  He projects a similar trip in this spot stalking Home Base on the outside. His last race was a bit disappointing but he was coming off a career effort and he is lightly raced thus I’d expect him to rebound and he still has room to improve.

The Belmont 9th is an allowance for three-year-olds and up going seven furlongs on dirt. There are multiple three-year-olds that are coming off layoffs that figure to take money. Morning line favorite Cost Basis is one such horse who hasn’t been seen since February. His maiden win two starts ago was good and produced multiple next out winners. He goes out for top connections but not sure he has the most upside in this group and has to improve to beat the older horses thus at a short price, he’s unappealing.

Edge of Fire has not been seen since early July when he flattened late when trying his longest distance to date. Today he tries a sprint for the first time since his winning debut and perhaps his recent form of settling for minor awards was because he prefers sprinting over routing. He has to improve but will likely enjoy sprinting again and should be a fair price.

Of the three-year-olds, I prefer Superfecto who hasn’t been seen since May. His debut was eventful, a race that Dr. Post won and that horse is now graded stakes placed. Last time he stretched out and showed tremendous speed through the middle portions of the race and won comfortably. His trainer does well off long layoffs thus he’s my alternative.

Of the older horses, I am against Foolish Ghost who has hung on to win narrowly in his last two races. He is likely to get the lead again but think this field is tougher and he would have to get an extra furlong in order to win this race.

The horse I prefer is Binkster (9/2 ML) whose efforts two and three starts ago can win this race. Particularly three starts ago when he chased Yaupon around and that horse will be amongst the favorites for the Breeders’ Cup Sprint. Last time, he broke a step slow and made a strong middle move prior to flattening in the stretch. He doesn’t typically have gate issues thus I’d expect him to rebound and his best efforts make him a strong contender.