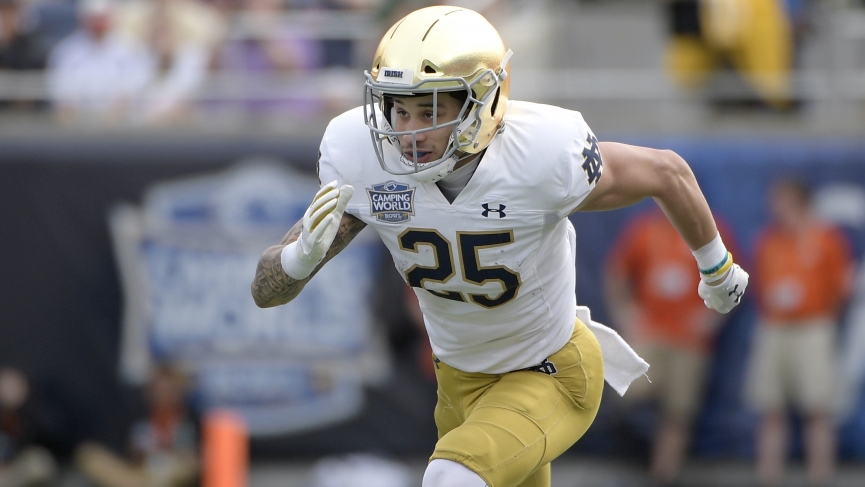 When the goal is to win a National Championship every year, as it is in South Bend, anything less is a disappointment. The clock has been ticking for 32 years at Notre Dame, and it won’t tick much longer for head coach Brian Kelly if he can’t lead the Fighting Irish back to the Promised Land real soon.

No, these aren’t Knute Rockne’s Irish, drawing the lion’s share of attention in the college football world. Heck, these aren’t even Ara Parseghian’s Golden Domers. Sure, DraftKings college football odds have Notre Dame as the seventh pick on the board at 28/1 to end the title drought that has been running since 1988. But that puts the Fighting Irish behind four – FOUR! – teams from the SEC and we all know to account for artificial inflation on any Notre Dame odds.

Factors in why those college football futures might be a bargain this time around include all five offensive linemen returning along with Ian Book at quarterback. That side of the football will be working with a new offensive coordinator in Tommy Rees, who was on campus in South Bend just a few years ago and will only be 28 when the Fighting Irish finally take to the gridiron. 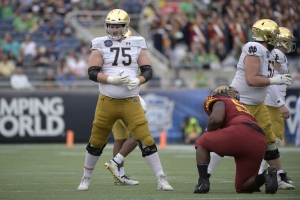 Book will be looking for new targets after his top three receivers all left, that group led by Chase Claypool who was a 2nd-round pick in the NFL Draft by the Pittsburgh Steelers. If he can keep his nose clean, Kevin Austin might be the guy who picks up Claypool’s slack. Freshmen who can help quickly are TE Michael Mayer and WR Jordan Johnson.

What would really help the offense is a dependable running game. Notre Dame was just average in that column last season, ranking 45th in rushing, and lead back Tony Jones Jr. has taken his talent to New Orleans as a free agent signing by the Saints. The ground attack was snuffed out entirely in losses to Georgia and Michigan, and nobody returning really stands out other than maybe redshirt freshman Kyren Williams. Can true freshman Chris Tyree live up to his advanced billing and become the feature back?

Owusu-Koramoah A Name To Remember…And Learn To Pronounce

Outside of the 45-14 rout at the hands of Michigan, the defense was up to the challenge in 2019. Even in that loss, a couple of fumbles on a rain-drenched field at the Big House – and the offense being stymied from the get-go – played a large role in the final score. The Irish finished 12th in the country in scoring defense and 18th in total defense, and the good news is the front 7 should still be a strong group.

Khalid Kareem won’t be easy to replace at the end, but Ovie Oghoufo appears ready by all indications. The interior of the D-Line might be deeper than any other team, and the linebacking corps is also solid with rover Jeremiah Owusu-Koramoah leading the way.

Where things could get dicey is in the defensive backfield, especially at corner. Kyle Hamilton and Houston Griffith, along with Ohio State transfer Isaiah Pryor, have the safety positions nailed down, but Tariq Bracy and Shaun Crawford are yet unproven against top receivers out on the corners, and that is the one position on defense to watch during summer practice.

Chances Of Trip To Ireland Seems Remote At Best

The luck of the Irish might have already taken a hit, in every sense of the word. Notre Dame is scheduled to play Navy in Dublin, Ireland during what has become known as ‘Week Zero’ of the college football betting slate (Aug. 29). That seems unlikely now, and if the start of the season gets pushed back at all, the matchup could be scrapped altogether since the two schools do not share a common bye week.

That game was the first of three neutral-site contests on the Irish schedule, though the other two aren’t so neutral. Notre Dame travels to Charlotte, NC to meet Wake Forest in Week 4, and goes to Green Bay a week later to take on Wisconsin. Stanford comes to South Bend seven days after the Fighting Irish play the Badgers.

The biggest two games on their fixture are in November when the Irish host Clemson on November 7 and then go to USC three weeks later. Notre Dame and Clemson last met in the 2018 CFP Semifinals, the Tigers coasting to a 30-3 decision to cover the 12-point spread on the NCAA odds. Notre Dame and Southern Cal met midseason last year, the Irish almost blowing a 2-TD lead to eke out a 30-27 triumph as 10-point chalk.

It’s not just the lack of a national title that has Notre Dame fans grumbling. The last New Year’s Six bowl game the Fighting Irish won was the 1994 Cotton Bowl when they slipped past Texas A&M, 24-21. Another Camping World Bowl appearance this time will increase the grumbling from the alums to outright yelling. A New Year’s Six appearance should be in the cards, but a championship win would be a far cry. Bettors beware, Notre Dame odds to win the championship is a bet to stay away from.