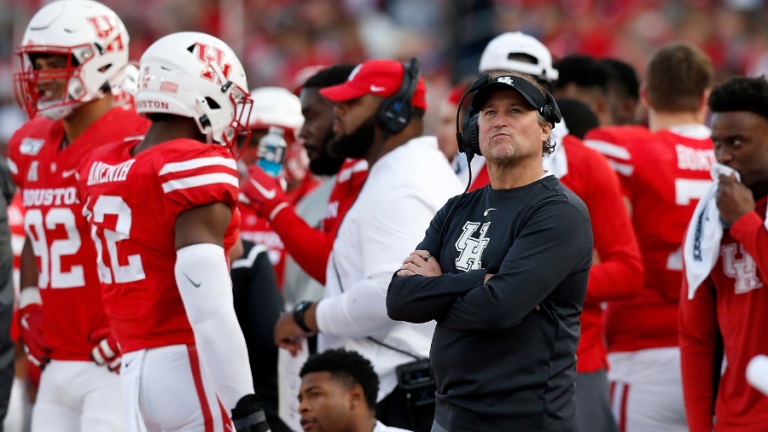 Odds.com’s BYU vs Houston Pick – College Football Week 7: #13 BYU heads to Houston on Friday night to take on their fellow namesake in the Cougars. BYU is 11-5 ATS in their last 16 road games, but have failed to cover in three of their last eleven as the favorite. It’s Cougar vs Cougar on Friday Night Lights football.

Were the BYU Cougars guilty of looking past their last opponent and ahead to this week’s clash with the Houston Cougars? And just how fortunate was turnover-prone Houston to get a win in its long-awaited season debut? Those are two questions that we’ll try to answer in this double-Cougar battle.

It’s the second half of a solid Friday night doubleheader on ESPN, and both No. 15 BYU and Houston have some interest in the first game that finds No. 17 SMU on the road against Tulane in an All-AAC matchup. The pair of Cougars boot things a little after 9:30 p.m. (ET) at TDECU Stadium in Houston where BYU is giving up 4 points at DraftKings.

That translates into a moneyline of near -160 on the visiting Cougars, with the return on UH +130. The contest is carrying a 63-point total.

Brigham Young had been sailing along in its first three games, the Cougars have seen what should’ve been one of the nation’s toughest schedules reworked into a far easier slate. Kalani Sitake’s crew wasn’t going to keep that up even given the softer matchups, and UT-San Antonio had nothing to lose with everything to gain in last Saturday’s skirmish.

The Cougars brutalized their first three foes behind a strong offense led by quarterback Zach Wilson. While BYU was able to move the ball pretty well, ringing up 470 yards behind a balanced attack, converting those yards into points proved tougher against the Roadrunners. After being blanked in the first quarter, Wilson led the Cougars on two scoring drives in the second quarter and finished an efficient 22-of-30 for 292 yards through the air.

Brigham Young’s defense held UTSA in check until the fourth quarter when the Roadrunners scored both of their touchdowns. And the Cougars came out of the contest in good health, the only issue concerning center James Empey who is questionable this week with a foot injury.

It’s doubtful Houston head coach Dana Holgorsen will say it was worth the wait, but he was certainly happy to finally see his Cougars take the field and come away with a 49-31 triumph against AAC rival Tulane last Thursday. Houston was favored by about a touchdown on the closing NCAA football odds and used several big plays to win it.

What Holgorsen was not happy about were all of the mistakes his team made, from the 10 penalties to the five turnovers. Four of those giveaways came in the first half when the Green Wave built a 24-21 lead at intermission. A 97-yard kickoff return in the third quarter finally gave UH the lead for good

You can’t really fault the defense for the 31 points that Tulane scored, two of its touchdowns the direct and immediate result of UH turnovers. The Cougars never came up with any takeaways of their own, but also didn’t allow the Green Wave to get anything going when they had the ball. Senior Payton Turner was the star with five solo tackles and a pair of sacks.

Houston used seven different running backs to rush for more than 140 yards against Tulane. Mulbah Car was one of them before sitting with an ankle sprain. The senior out of Austin is listed as day-to-day.

Friday’s collision marks the third between the two Cougars, the previous two taking place in 2013-14 when BYU claimed a victory in each matchup. Houston covered the NCAA football odds in both meetings, each time as a double-digit underdog. The 2013 clash in Houston was an offensive thriller, BYU coming out on top 47-46 thanks to a touchdown with a little more than a minute to go.

We’ll get another comparison to make between the two teams next week when Houston travels to Navy for an AAC battle. Brigham Young wasted the Midshipmen in both teams’ season opener, 55-3, one of two sound whippings Navy has suffered in 2020.

Parts of the south and central Texas have been experiencing a mild Indian summer recently, with temps climbing into the 90s. A front is expected to arrive sometime Thursday, however, and leave behind some nice conditions on Friday. Look for clear skies and the thermometer in the upper-60s when the Cougars and Cougars kick things off.