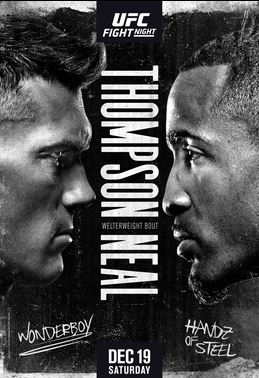 The bout marks the first appearance for both fighters in a UFC octagon in 2020. Thompson hasn’t competed since November of 2019, while Geoff Neal is bouncing back from a severe septic infection that kept him out of action for almost the entire year.

UFC Vegas 17 is the last television event of the 2020 calander year and is o be expected tthe last UFC event to take place at the UFC Apex Center for the foreseeable future. UFC 257, headlined by Conor McGregor and Dustin Poirier will take place on Fight Island in Abu-Dhabi on January 23rd, 2021.

Stephen ‘Wonderboy’ Thompson picked up the dominant 50-45 unanimous decision victory over Geoff Neal to cap of the UFC year of 2020. All 3 Welterweight bouts on this card went over the betting total, putting the ‘Over’ in the UFC Men’s Welterweight division as one of the most profitable bets to back, going 89-45 for +20.45 units. Meanwhile, the dogs went 1-2 on the night at 170lbs, but they will finish the year with a 54-79-1 record for +13.2 units profit to end 2020.

Rob Font picks up the impressive victory over Marlon Moraes with a first round TKO. Font cashes at +140 and improves to 8-3 in the UFC since making his debut back in 2014. In his 11 UFC fights, Rob Font has profited his backers +4.08 units, an overall 37% return on investment.

Marcin Tybura picks up an impressive victory over Greg Hardy as a +105 underdog. With the victory, the underdog in the UFC Men’s heavyweight division will close the year with a 36-50-2 record for +3.53 units profit.