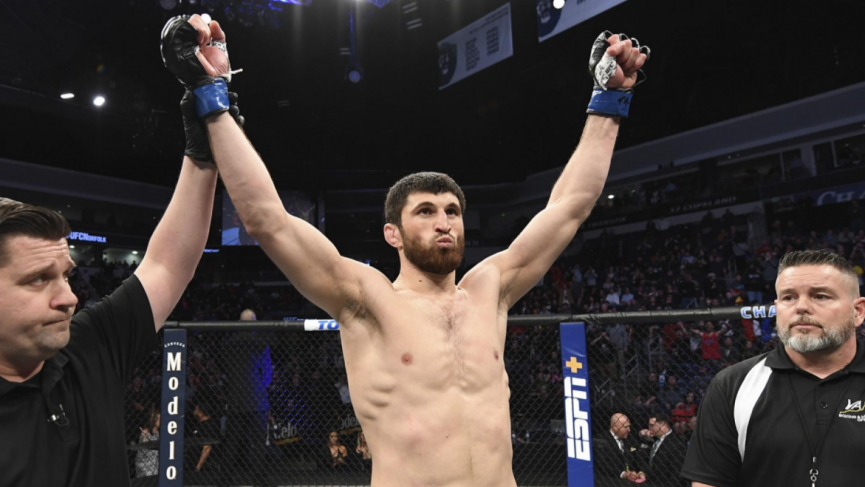 Nikita Krylov vs Magomed Ankalaev Pick – UFC Vegas 20 Predictions: The undercard of UFC Vegas 20 might be a rough ride with some lower-level fighters, but the main and co-main event are spectacular. The co-main event of UFC Vegas 20 is a light heavyweight showdown between rising stars who are knocking on the door of being true contenders.

The Fighters: Krylov vs Ankalaev

Magomed Ankalaev is a monster. This man has been on the shortlist of future champions at 205 for quite some time. The UFC knows what they have on their hands with this monster Russian, and they have been giving him a nice slow road in the UFC, allowing him to grow and mature until he is truly ready to assault the top 5. It appears that Ankalaev’s time has come as Saturday he is the co-main event and is facing a highly respected fellow prospect with a lot of experience in Nikita Krylov.

Nikita Krylov was one of the hottest prospects outside the UFC, and in 2018 he finally got his shot in the big show but was welcomed by current champion Jan Blachowicz. Jumping straight into the UFC Light-Heavyweight division deep end, Nikita was submitted by Jan in the second round. Nikita returned the favor when he faced OSP as his next challenge and showed what he can do by submitting St. Preux in the 2nd. After a lost split to #1 contender Glover Teixeira and a win over the hype train Johnny Walker, Nikita finds himself on the doorstep of contendership. Only 2-2 in the UFC, but Krylov is 27-7 with 11 knockouts and 15 submissions under his belt and is riding high after his last win.

The Match-Up: Krylov vs Ankalaev

The landscape of 205 has been shaken by Jon Jones moving to Heavyweight, and I couldn’t be happier. The list of contenders is growing, and now that there is room to move at the title, we have exciting matchups ahead of us to see who will become the new Light Heavyweight King. Nikita Krylov has far more MMA experience than Ankalaev, but I just can not shake the feeling that Magomed Ankalaev is something special.

Magomed Ankalaev is a man who moves far better than somebody his size should be allowed to. Light on his feet and sneaky with the way he sets up shots, Ankalaev sheds the usual Russian grappler stereotype by being an excellent striker. Now that’s not to say that Ankalaev isn’t a good grappler because he very much is, but we rarely see it. Ankalaev is nearly perfect in his MMA career, with his lone loss coming as one of the craziest submissions in the modern era of the UFC. After dominating Paul Craig, somehow Ankalaev managed to tap at the literal last second of the fight, and it cost him his previous “0”. If not for his quick tapping hand, Magomed would be an undefeated prospect and likely an even bigger favorite than he is now.

UFC Vegas 20 Co-Main Event Best Bet – Magomed Ankalaev (-350 via Bet365): I feel as though I am completely disregarding Nikita Krylov’s skillset. That could be a deadly mistake because Krylov is exceptionally talented on both the feet and on the floor. Still, we have seen him be handled in the UFC. Both Glover and Jan were able to stifle the offensive grappling of Krylov with their wrestling, and I believe that Ankalaev can do the same thing. Unless Ankalaev doesn’t respect his opponent, he should be able to get this fight to the floor and grind out the clock. I am not a big fan of the Ankalaev price tag on the UFC Odds board, but this is a favorite or pass spot for me. I might look for the Magomed by decision prop when we get a bit closer to fight time and hope that Nikita is able to survive for 15 minutes to bring that price down.