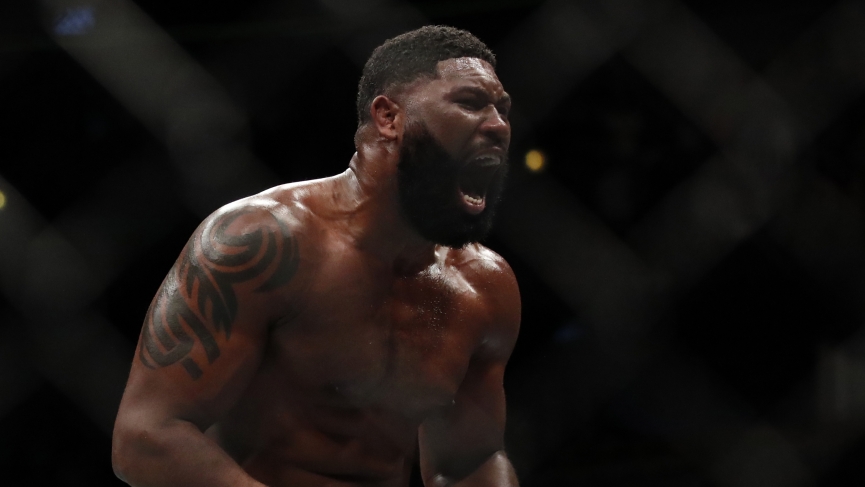 Curtis Blaydes vs Derrick Lewis Pick – UFC Vegas 19 Predictions: UFC Vegas 19 will have quite a bit to live up to after all that and we have heavyweights headlining the card! Let’s break down what should be a fun main event.

If you want more picks for UFC Vegas 19, check out the full DieHardMMA Podcast for this week’s UFC event.

The Fighters: Blaydes vs Lewis

Curtis Blaydes is a monster of a human being who is second to none when it comes to wrestling in the UFC’s heavyweight division. Blaydes crowds his opponents, backs them up and then has many different options of getting them to the floor. Once Cutis Blaydes has his prey on the mat, the fight is practically over. His rise and repeat style of takedowns and seemingly endless gas tank for a heavyweight fighter is something unheard of that very few are equipped to hide. In fact, if it were not for Francis Ngannou, Curtis Blaydes might already be your heavyweight champion.

The ‘Black Beast ‘Derrick Lewis holds the UFC heavyweight record for knockouts. What more of an introduction do you need? This man is one of the biggest fan favorites in the sport today because of his hilarious one-liners and his ability to put his opponents to sleep in the cage at any time. Blaydes isn’t the most technical fighter, but he carries massive power and has it available to him even late in the fight. If there is a fighter who you think of with “a puncher’s chance,” then it would be Derrick Lewis.

The Match-Up: Blaydes vs Lewis

As much as I love Derrick Lewis, this is an awful matchup for him. Curtis Blaydes can take down any man alive, and he does it at will. The only man capable of stopping Blaydes’ takedowns so far is Francis Ngannou, and he didn’t stop those takedowns with his hips. He did it by knocking Blaydes out before he could get in on a single leg. Derrick Lewis has to adopt the same strategy. If Blaydes gets going in this fight, there is no stopping him, and Lewis needs to land some big shots to earn Curtis Blaydes’ respect early.

The issue I see in this fight is the takedown defense and fight IQ of Derrick Lewis. As fun as it is to watch him fight, if you have seen him fight once, you have seen him fight every time. Lewis does not evolve as a fighter. Derrick Lewis has a 52% takedown defense rating in the UFC, and when compared to the 55% takedown accuracy of Curtis Blaydes, the writing is on the wall here. Not only does Blaydes have a 55% accuracy, but he attempts an astounding 6.98 takedowns per 15 minutes. Blaydes breaks his foes by weighing on them, and once they feel like they have an opportunity to get up, he returns them back to the floor. Double legs, single legs, drips, drags and throws. Curtis Blaydes has every move in the wrestling hand-book at his disposal and will continue to change up and chain his attacks until he finds one that works.

UFC Vegas 19 Main Event Best Bet – Blaydes/Lewis Over 1.5 Rounds (-135): Derrick Lewis does have an incredible ability to stand up with the weight of another 265+ pound man laying on his chest, but that ability will be tested on Saturday. I have a hard time imagining Lewis pulling that off with Razor Blaydes lying chest to chest with him. If you haven’t figured it out yet, I like Curtis Blaydes here a lot. Even at -400 on the UFC odds board, I believe that Blaydes is a worthy parlay piece if you are looking to bring it down a bit, but there might be a better way to approach this fight. Lewis is thought of as a power finisher and somebody who puts his opponents away early, but it’s just not true. Lewis has been to the 3rd round in five of his last seven fights. Blaydes similarly is in no rush. Curtis Blaydes drags his opponents deep into the fight before he finally either TKO’s them or wins a decision that leaves no question who won the fight. If you don’t feel like playing the chalk, take a look at the over. I would expect the total to be 2.5, but if the bookies slip up here and open it at 1.5, that’s the move.