It’s time to look at my Amanda Lemos vs Mizuki Inoue pick for the UFC Vegas 7 undercard main event but let’s recap UFC 252 in all it’s glory.  UFC 252 was a wild roller coaster with massive upsets, derailed hype trains, and some really just weird circumstances. This is MMA folks. We love this sport for its unpredictability, but sometimes that gets us right in the shorts.

This week the UFC Vegas 7 has a much lower level card full of hungry young fighters looking to get out there and put their name in the fan’s mouths and what that means is action! This card doesn’t look sexy, but there are finishers and young rising future stars so it will be fun to watch and we can always find spots to bet on.

This fight is a really interesting matchup between a couple of hot Strawweight prospects. Inoue comes to the UFC from Invicta where she had a great run and so far is 1-0 in at the big show. Mizuki Inoue is a tough scrappy little fighter who has really crisp hands and good forward pressure.

Inoue has good head movement and marches towards her opponents looking to put them on their back foot. In Invicta FC Inoue fought to a 5 round split decision loss against then-champion and current UFC fighter Virna Jandiroba which is impressive considering what we just saw Virna do against Felice Herrig on Saturday. 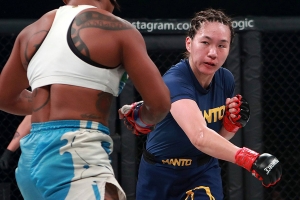 Inoue has extremely effective defense from her back, and being able to keep a fighter with the BJJ at the level of Virna at bay for 25 minutes is nothing short of amazing. I am a huge fan of Mizuki and at just 25 years old she has a bright future ahead of her in MMA.

Amanda Lemos has been fighting at 135 for the majority of her career and it became painfully obvious that she was simply too small for that weight class when she was rudely welcomed to the UFC by Leslie Smith who had a full 5 inches of height on her. Smith walked Lemos down and was able to just handle her until the referee provided a mercy stoppage and that is the lone loss on Lemos’ otherwise spotless record.

Lemos was able to bounce back in her next fight at 115 where she belongs against Miranda Granger and she really showed off in that fight finishing Granger by first-round submission. Lemos fights long and is an excellent counter striker. She works the legs and body with hard kicks and has an underrated ground game. Lemos can use the body lock and trip takedowns to secure top position and once she is there she is deadly.

Lemos has a tight squeeze and solid shoulder pressure smothering the women who are unfortunate enough to get stuck underneath her. Lemos is also a finisher! She has yet to see the judges scorecards and when you get a woman capable of finishing like that you have to take notice since it is unusual for WMMA.

This fight is an excellent bit of matchmaking. Mizuki will pressure forward and Lemos will be looking to counter. Once they tie up I believe that Lemos will look to use the body lock and get the fight on the mat, but we know Mizuki is more than able to handle her submission offense.

What I don’t understand about this fight is the line. As much as I like the skill set of Mizuki she is coming off of a very questionable split decision win over Yanan Wu where she was outlanded 123 to 93 significant strikes and is facing a fighter in Lemos coming off a quick submission win. I would expect this line to be even or potentially have Lemos be favored. I think there is plenty of value on the dog at this line and I believe Mikuzi plays right into the hands of Lemos.

Lemos is going to chew up Inoue with kicks as she marches forward and when they do clinch up I believe that Lemos having fought at 135 the majority of her career will be the stronger of the two and be able to dominate the ground fighting or get back to the feet.

Expect a high out-put battle between these two that should be highly entertaining and might get hairy. Like I said, this should be a pick ‘em and I will take the shot with a live dog and roll those dice all day.