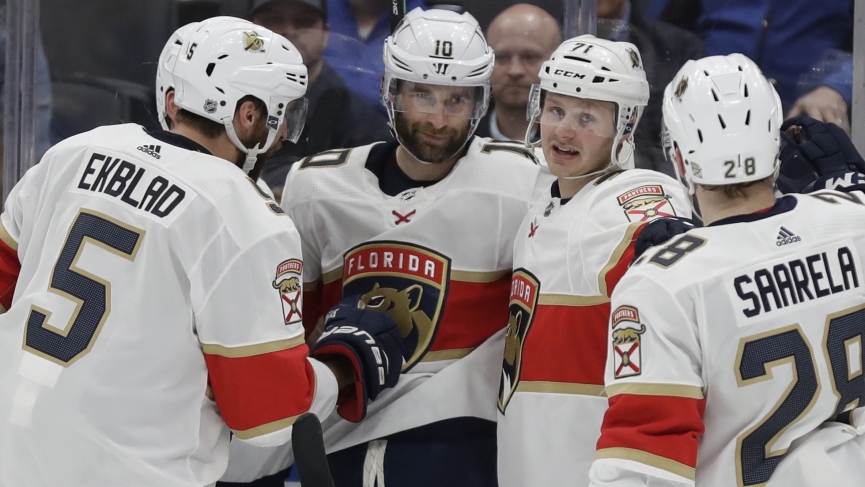 The Florida Panthers spent the offseason trying to assemble a team good enough to get them back into the playoffs in an attempt to also revitalize what has been a very downtrodden and sparse fan base in their home of Sunrise, Florida. This article investigates the Florida Panthers NHL Picks to win the Stanley Cup who is currently priced at around +5500 to win the Stanley Cup at Fanduel Sportsbook.

New goalie, forwards and a coach still can’t get the Panthers a win

The Panthers brought in one of the top goalies in the NHL Sergei Bobrovsky signing him to a big 7 year, $70 million contract as a free agent last offseason in an attempt to fix years of shaky and inadequate goaltending that have plagued this franchise. Unfortunately, Bobrovsky got off to a very rough start with his new team and overall on the season has a 3.23 GAA and .900 save percentage which is not exactly the quality of performance the Panthers were expecting from their prized offseason signing.

Florida added forwards Brett Connolly and Noel Acciari who provide a strong two-way presence on the ice and enhance the level of depth for the Panthers up front where they already possess plenty of offensive weapons and game-breaking talents like Jonathan Huberdeau, Aleksander Barkov, Evgenii Dadonov and Mike Hoffman. The ability to score goals for Florida hasn’t been their issue in years past but rather it’s been problems keeping the puck out of their own net and a combination of shoddy defending and poor goaltending that kept the Florida Panthers out of the playoffs in three straight years prior to the current season.

NHL bettors had high hopes with the return of coach Q

Florida brought in head coach Joel Quenneville as their new head coach bringing plenty of past success and tons of experience with him after he led the Chicago Blackhawks to three Stanley Cups as their head coach in 2010, 2013, and 2015. The person who hired him in Florida was Panthers GM Dale Tallon who was a senior advisor with the Blackhawks organization when Quenneville was hired there. 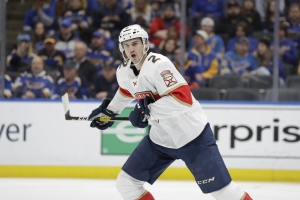 Heading into the season with what appeared to be a harmonious relationship between the GM and new head coach(who won before together in another city), a very fast and skilled lineup offensively and a big upgrade in between the pipes, things were supposed to be looking up for the Florida Panthers. Instead, the team was stuck in neutral and inconsistent throughout the entire regular season. Giving up too many goals was once again the problem early in the season for Florida thanks to a combination of a blue line that isn’t loaded with quality depth on it once you get beyond Aaron Ekblad and Anton Stralman along with the subpar performances in the net from Sergei Bobrovsky.

The Panthers were a hideous 29th in the NHL in goals allowed per game when the season was stopped due to the pandemic and they surrendered 3.25 goals per game on average. Yet on offense the team was 6th in the NHL averaging 3.3 goals per game. Florida was one of several league-wide examples of teams that could score goals with an offense dangerous enough to beat anyone at any time but the inability to stop the opposition from scoring and numerous breakdowns in coverage in their own zone continuously plagued Florida during the regular season which is why they were on the outside of the playoff picture in early March when the season was put on hold.

If the Florida Panthers had made the playoffs this past season, they were a threat to beat anybody because of their offensive capabilities featuring five 20+ goal scorers on the team but far too often, the Panthers gave it back at the other end by allowing too many goals because of their lack of shutdown ability on defense. That is the very reason why Florida wasn’t in the playoffs when the season was stopped.

I can’t count on the Florida Panthers going on a late-season run to get into the playoffs when getting on any sort of extended winning streak has been a problem for them. The team they were trying to catch, the Toronto Maple Leafs, for that final Atlantic Division playoff spot kept giving them chances to track them down but the Panthers kept on fumbling in the red zone so to speak. Each time the Leafs lost, the Panthers failed to gain ground and take advantage of it because they were losing their own games at the same time.

I think this is a team that can be a playoff team if they can upgrade the bottom two pairs of defensemen on their blue line and get a bounce back season from Sergei Bobrovsky. They have the scoring but they need to shore up the other end of the ice. It’s quite simply too late for them to fix their defensive struggles in time to salvage the waning playoff hopes they have this season.