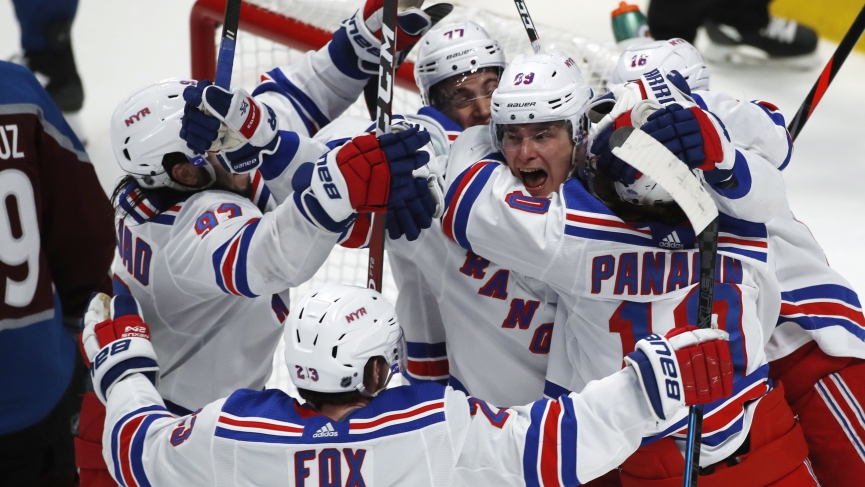 “Fact” or “fiction” – That’s my goal in reviewing the NHL betting markets when it comes to NHL Stanley Cup futures value with particular teams should we see the NHL season resume at some point. This article investigates the New York Rangers who are currently priced at around +4000 to win the Stanley Cup.

“New Life” for New York and Their Futures Picks

The New York Rangers were at one time dead and buried in terms of any type of realistic playoff aspirations. That was before they put forth an 11-6 run in their last 17 games prior to the season being shut down which placed the Rangers back in playoff contention where currently they reside just 2 points behind the final Wildcard playoff positions in the Eastern Conference. The uptick in performance prior to the season being stopped came from the outstanding goaltending from their duo of young goalie prospects Igor Shesterkin and Alexandar Georgiev which have made veteran netminder Henrik Lundqvist an afterthought in the Big Apple. Lundqvist has been forced to ride the pine and sit on the bench for the majority of the season because of his struggles whenever he got the starting nod. The veteran’s decline along with the solid performance of both young goalies has led to a very awkward goaltending situation that has been very difficult at times for head coach David Quinn to navigate. He wants to go with the goalie that gives him the best chance to win but at the same time, it’s not easy to sit down a veteran goalie like Lundqvist when he has been one of the best goalies in the NHL for the better part of the last decade. Having said that, those days appear to be far behind him. 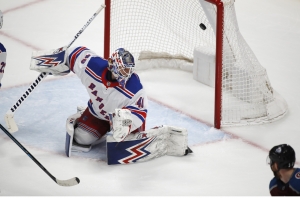 New York’s offense has been their strength as goal scoring has been their most powerful attribute by far as the team averages 3.3 goals per game making them a Top 5 team in the NHL in scoring. Their power play is also strong ranked 7th in the league. It’s the inability to keep the puck out of their own net which haunted the Rangers in the majority of the losses they suffered during the course of the regular season. New York is 23rd in the NHL in goals allowed per game and their penalty kill is also sitting at 23rd in the league. The New York Rangers have a talented roster led by Artemi Panarin and Mika Zibanejad who have combined for a whopping 73 goals and 170 points this season. Chris Kreider has been solid again this season with 24 goals and 45 points in 63 games played. Ryan Strome and Pavel Buchnevich have helped out with secondary offensive contributions as well. The fact they have not gotten as much as expected from their 2019 1st round draft pick Kaapo Kakko who has only 10 goals in 66 games this season illustrates how scary and dangerous this team could be offensively in the long-term. The firepower this team has is the catalyst for allowing them the chance to compete for a postseason berth.

Final Verdict for Rangers becoming one of your NHL picks

The New York Rangers MLB Odds are 40-to-1 to win the Stanley Cup because they are one of the teams that is on the outside looking in. It’s tough to say what will become of the NY Rangers playoff chances because we don’t know if the season will resume and we don’t know in what format either. If the NHL decides to go right to the playoffs, the NY Rangers may be left out of the postseason unless the league decides to expand the field a little bit for the Stanley Cup Playoffs keeping the Rangers NHL futures odds alive. Let’s assume that either the regular season is completed or the playoff field is expanded to 20+ teams which means the NY Rangers would either make the playoffs or at least have the chance to make the playoffs. I think they would be worth  NHL picks small flyer bet to win the Stanley Cup at these current odds. Keep in mind that New York was on quite a nice roll prior to the season being halted and the Rangers have the offensive firepower and depth to cause trouble for any playoff opponent. In the last month or so before the shutdown, the Rangers were also finally getting above average and consistent goaltending from both Shesterkin and Georgiev.

All the NY Rangers need to do is find a way to get in and if they do, they could turn this +4000 ticket into a very live investment. I would recommend placing a few bucks on New York at this extreme value price at FanDuel Sportsbook.