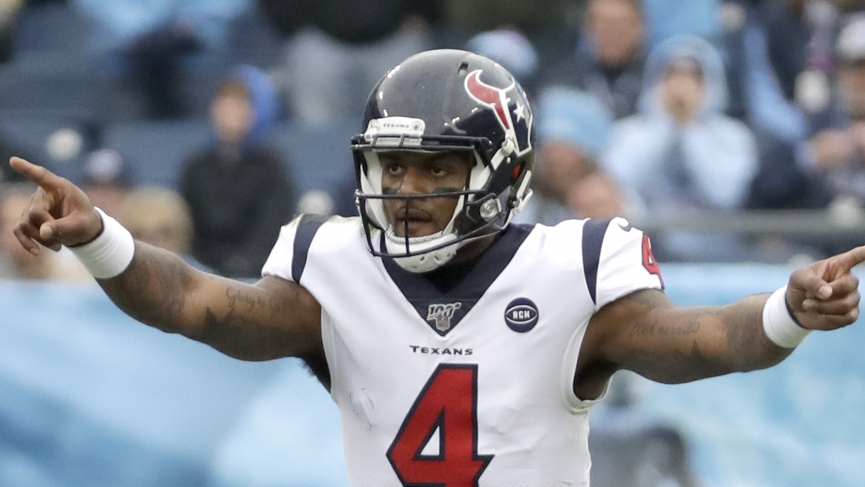 The Houston Texans come into the 2020 season off back-to-back winning seasons. Although they are without DeAndre Hopkins, this is still a team that went 21-12 the last two years. So, how does the loss of Hopkins effect the Houston Texans futures odds in the marketplace? In this article we tackle the Texans chances of winning the AFC South, and if they’re live to hoist the Lombardi Trophy.

I have been looking forward to writing an article about the Houston Texans since January 12th, 2020. It’s hard to know whether the world should take a step back and appreciate the magnificence of Patrick Mahomes, or be in awe of the horrific coaching ability of Bill O’Brien. I will choose the latter.

The moves made by O’Brien in the divisional round of the playoffs were jaw dropping. Whether you are in ArrowHead Stadium against that offense or not, you don’t lose a game when you are up 20+ points. It’s hard to imagine a coach getting canned after a 21-12 record the last two seasons, but I thought he deserved to be.

He kept his job, but surely it couldn’t get any worse right? Welp, not exactly. The front office of the Houston Texans announced during the offseason that Bill O’Brien would pull double duty this year. He was named the General Manager in addition to being the Houston Texans Head Coach.

The first task that O’Brien tackled as GM of the Texans was destroying whatever relationship he had left, with the best wide receiver in football, DeAndre Hopkins. He would end up trading Hopkins for a running back and a couple bags of beans, and here we are. 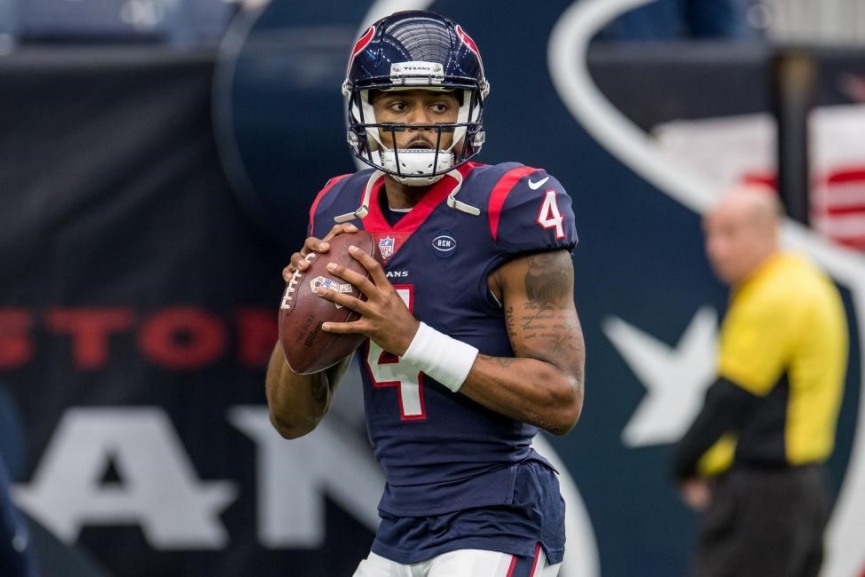 The pandemic has thrown most sports bettors out of their yearly offseason routine. The time is now for bettors to start looking toward the NFL futures market. The season will be here eventually, and when they set a date you will see people flocking too the marketplace. If you haven’t placed NFL futures bets already, don’t wait until the masses start shifting the lines substantially.
The first question we need to ask ourselves is how do the 2020 Texans measure up to last seasons team. Granted, there are things we don’t know about the 2020 Texans because they haven’t hit the field yet. We don’t know how the draft picks will translate to the field. We don’t know if the offense can make up for production they lost in DeAndre Hopkins. However, we can estimate what we think we will see, and then determine if the Texans futures market holds any value.

If you look at the analytics, the Houston Texans overachieved last season. They finished 17th in Offensive DVOA and 26th in Defensive DVOA. People will argue that is because O’Brien is a good coach. I will argue they won in spite of him, not because of him. Even though the analytics say the offense was average last season, the offense will not be the reason this team fails. Deshaun Watson is a special quarterback, and he has targets. Hopkins might not be there, but Kenny Stills, Randall Cobb, and new pickup Brandin Cooks is more than enough for Watson to work with at the wide receiver position.

In addition to losing Hopkins, the Texans lost running backs Lamar Miller and Carlos Hyde. I don’t think the loss will matter at all. Duke Johnson is a running back I am excited about. He is severely underrated, and not the only Johnson in the backfield this season. RB David Johnson was part of the trade for Hopkins. He hasn’t been the running back he was a few years ago, but his 2018 season wasn’t bad and the first 2 months of the 2019 season was passable before the injury. They will get the job done.

The issue with the offense in the line. It’s been the biggest problem since Deshaun Watson was drafted. Pro Football Focus (one of the best football analytic websites on the net) ranked the Texans as the 20th best offensive line in football. That’s below average. While the line is the biggest issue on that side of the ball, Watson is a magician and is used to picking up the slack for the offensive unit.

The defense is the issue. They were a pathetic 26th in defensive DVOA. Even for people that don’t dive deep into the analytics, they still failed the eye test horribly. They allowed 25.3 points per game on average. The secondary has to be the weakest unit on the field. They managed to resign Bradley Roby, but is that enough? Probably not.

The defense had the built in excuse of missing JJ Watt for a large portion of the year due to a torn pectoral muscle. His loss would be compounded by the fact that Whitney Mercilus wasn’t left single covered on the other side of the line. They attempted to draft some defensive help in this years draft. They grabbed defensive tackle Ross Blacklock from TCU in the 2nd round and edge/LB Jonathan Greenard from Florida. They didn’t cover all their needs defensively, and I would be looking at OVERS in Texans games at the start of the year. 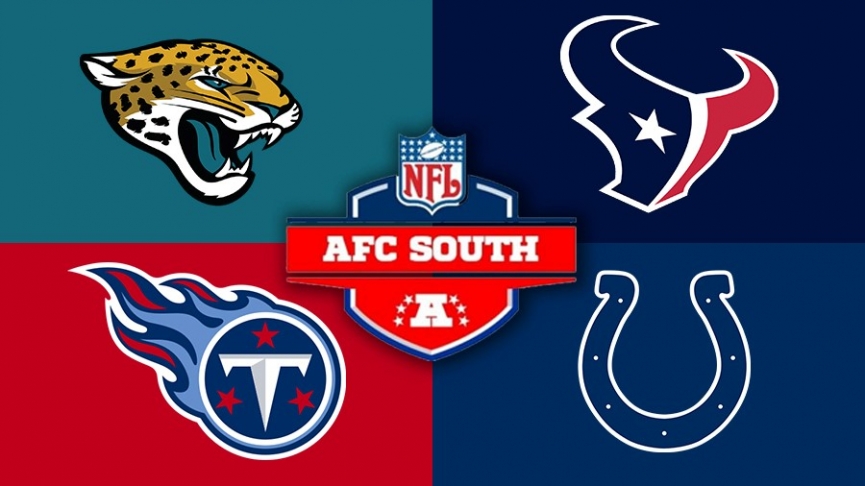 Why can’t the Texans win the AFC South?

Can anyone take a quick look at the AFC South and tell me why the Texans aren’t live to win the AFC South? They won it last season, what is so different from last season?

Indianapolis Colts (+130) – There is a lot to like about the Colts. They have the best young offensive line in the game. They have solid running backs in Marlon Mack and new draft addition Jonathan Taylor. I’m not exactly sold that T.Y. Hilton has a bounce back year because Brissett is gone. Defensively they might have the best young linebacker in football in Darius Leonard.

The front seven is better, but the defense can use some help. Most importantly, Phillip Rivers declined substantially over the last couple years. I don’t understand why everyone thinks it’s a guarantee that he will be successful because he has time to throw. His arm is one. He has no arm strength. He will still be the QB capable of throwing 4 INT’s in a game. In my opinion they don’t deserve to be the favorite.

Tennessee Titans (+160) – I love the people that swear by this Tennessee Titans team. Like they figured it all out now, watch out because Tannehill is a different kind of quarterback. This is Tannehill 2.0….. Stop it, your embarrassing yourself. Are the Titans an improved team with Tannehill? Yes, but he has played 10 regular season games for the Titans, let’s slow it down a minute. Tannehill’s best friend is the beast next to him in the backfield. Derrick Henry is still in the fold and that matters most to that offense.

The offense was ranked 6th in offensive DVOA last season and that’s strong. A. J. Brown looked great to end the season at WR and I know the team has high hopes for him. They have lost some key pieces on offense. They have a hole that needs to be filled at right tackle with Jack Conklin joining the Browns. You would assume that Isaiah Wilson fills that gap, but there is no guarantee he will be good. Defensively the team was ranked 16th in DOVA. The defensive analytics and the public perception seems to be off here. The public treats the Titans defense like it’s a top 10 defense, but it is not. They also have holes to fill on the defensive side of the ball like Jurell Casey going to the Broncos. They might deserve to be a very small favorite to win the division.

Jacksonville Jaguars (+1600) – They don’t have a chance to sniff this division. The three other teams in the division are 2 levels above this team, as sad as that may be.

Some time you place a bet because you have serious confidence in the angle. You might bet more money than normal on those bets because you feel it has a great chance of winning. Sometimes that is the case with futures bets as well. You might love the Chiefs to win the Super Bowl again and hammer it.

Other times you might bet something that you aren’t sure of but the value says it’s worth a shot. Those bets are usually known as ‘flyers’. You might here that a lot in the sports betting industry. “I’m going to take a flyer on the Mets to win the World Series.” That guy knows the Mets probably aren’t winning the World Series, but the value dictates it’s worth taking a small chance. That is the case with the Texans this year.

Can the Houston Texans win the Super Bowl?

Almost certainly not. I would never tell someone not to take a chance on a bet that is (+4000). If you want to throw a couple bucks on a flyer, I’m not going to say no. However, there is 0% chance that my money is going anywhere near the Texans to win the Super Bowl.

Can the Houston Texans win the AFC?

It’s really hard to see the Houston Texans getting by the top 3 seeds this year in the AFC. They couldn’t beat the Chiefs last year with DeAndre Hopkins, do we really think they get it done this year? It’s worth noting that they were on the road in that game, and they were up over 20 points in the 2nd Quarter, but I just don’t see it. Aside from the Kansas City Chiefs, the Baltimore Ravens should be strong this year. The Pittsburgh Steelers have a top 3 defense and a two-time Super Bowl champion quarterback coming back in the fold. Even the Buffalo Bills and the New England Patriots would give the Texans a really good game if they made the playoffs. At (+2500) to win the AFC, it’s a small flyer or pass. For me it’s probably pass.

Can the Houston Texans win the AFC South?

100% YES. The odds in this division are ridiculous. Why are the Houston Texans (+320) to win the division? They are as good as the Colts and Titans in my opinion. The loss of Hopkins will matter less than everyone thinks. Watson is a phenom. He could throw me open, never mind Stills, Cobb and Cooks. They have a comparable team to both the Colts and Titans. If I was setting the odds in this division, I would make Tennessee a (+150) favorite. I would set both the Texans and Colts around (+180). The fact that you can get the Texans to win the South at (+320) seems like an extreme overreaction. I will have money on the Texans at this price, the value is there.

Will the Houston Texans win o/u 7.5 games this season?

Based on history, the Texans should get over 7.5 wins. When I looked at the number today, I was surprised. I would have set the total closer to 8/8.5. Full transparency, I have been higher on this team than most people the last two years. I bet their season win total over in 2018 and 2019, both times the total was higher than 7.5 and both years they were winning tickets. I don’t see much changing from my opinion last season. The Jaguars are still the Jaguars, and Phillip Rivers is still Rivers regardless of the uniform he is in for the Colts. I suppose the biggest change in the division aside from Rivers, is Tannehill will start the full season for the Titans. Either way, If I am betting this win total, I’ll bet that the Houston Texans find a way to get at least 8 wins this year.