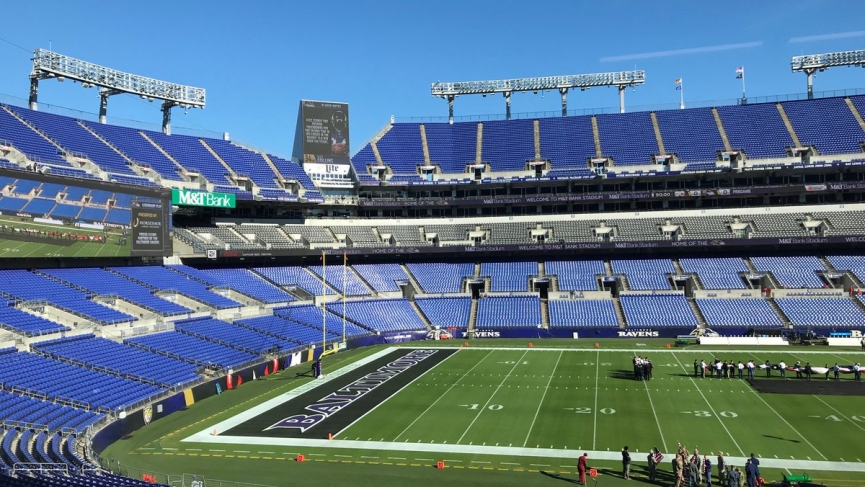 Odds.com’s NFL Week 5 Parlay: Let’s Parlay Ourselves A Winner In Week 5. The board has been examined and it’s time to choose the best Week 5 NFL Parlay possible.

The 3-1 Baltimore Ravens are a 13-point favorite at home to division rival Cincinnati. The Ravens are just 2-2 against-the-spread after falling 34-20 to Kansas City two weeks ago, and then unable to cover the 14.5 point spread in last week’s 31-17 victory in the Nation’s capital.

Dallas is 1-3. It’s putting up historically poor defensive numbers over its first four games. It’s 0-4 against-the-spread and it’s seen the total fly over in three straight. The Cowboys though benefit greatly here in playing in such a weak division, as Philadelphia leads with only a 1-2-1 record (even the Giants at 0-4 have a mathematical shot at winning the NFC East still.)

The Ravens won’t be looking past a division rival at home and it’s essentially put up, or shut up for the Cowboys this weekend.

Baltimore is in Philadelphia next weekend, then it enjoys its bye-week. The Ravens crushed the Bengals 49-13 the last time they met in October last year.

The Bengals are 1-2-1 and quarterback Joe Burrow already has 1,121 passing yards. Burrow had 300 yards passing, one touchdown, and an interception in his team’s win over Carolina while running back Joe Mixon had a huge day with 151 rushing yards and three major scores on the ground. Cincinnati is 10-4 against-the-spread in its last 14 on the road, but note that it’s 0-4-1 straight-up in its last five away from friendly confines.

Last year Baltimore led the NFL in both scoring and rushing, but the Ravens haven’t yet captured that same form this season. Last week quarterback Lamar Jackson had 206 passing yards and two touchdowns, while also running for 50 yards another TD as well. The Ravens have done well in this spot for bettors for a while now, going 10-3 against-the-spread in their last 13 following a straight-up win and 7-2 straight-up in their last nine at home.

Divisional contests are always the most important to teams and they almost always mean more to the home side. Use whatever cliche you want, but it’s now do-or-die for Dallas this weekend. A 1-4 start could be too much for the Cowboys to climb out of, even in this weak division.

But here’s the perfect opponent to get untracked against, as Joe Judge’s Giants come to town 0-4. Saquon Barkley was lost to injury in Week 1 and this New York offense has been unable to find any consistency since. Quarterback Daniel Jones enters with a weak 2:5 TD to INT ratio. Jones does have weapons around him still in Darius Slayton, Evan Engram, and Golden Tate, but chemistry continues to be a major problem for the unit. New York’s defense has been its strength to this point, as it concedes the fifth-fewest yards per game as a team.

Dallas signed Dak Prescott to a huge deal in the off-season and the Cowboys had big aspirations of contending for the Super Bowl this year, but those plans look to be in jeopardy after a shaky start to the campaign. Prescott has actually been the best player on the team and he is one of the only reasons the Cowboys have been competitive. Dallas has allowed at least 38 points in three straight games, meaning that defensive coordinator Mike Nolan is on the hot-seat this weekend.

With a spread and money-line like this (-13, -760), the oddsmakers are not predicting an upset in Baltimore. Neither should we. The Ravens are still out to capture the magic and momentum from last year’s record-breaking statistical campaign and a date versus the Bengals is just what the doctor ordered as Baltimore is 7-3 straight-up at home the last ten in this series.

Prior to the Ravens Week 3 loss to Kansas City. Baltimore was on a 10 game regular-season streak of not trailing once in the second half. Baltimore is one of the best second-half teams in football, and because of that, the ‘HT/FT’ prop has a ton of value at -210.

The bookmakers are also expecting a blowout in Dallas this weekend (-8, -420) as the Cowboys desperately try to avoid another loss. Despite its record and performance to this point though, Dallas is still very much in contention in its struggling division. The Cowboys defense catches a big break this weekend facing this struggling Giants offense and Prescott will now look to improve upon his team’s 6-1 straight-up home record vs. New York the last seven in the series.