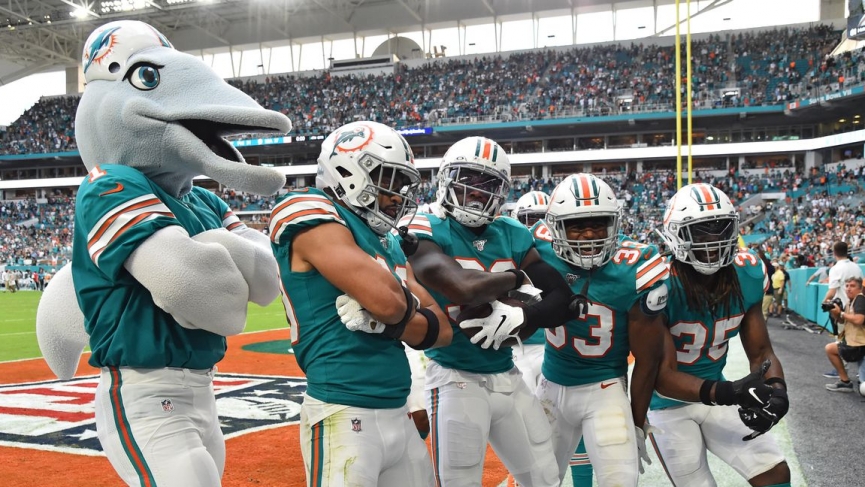 The Miami Dolphins take to the road in hopes of ending their 0-2 start to the season with a win over the 1-1 Jacksonville Jaguars. The Dolphins are 1-1 against-the-spread (ATS) with a 21-11 betting loss in Week 1 installed as 7-point road underdogs. They played much better on the offensive side of the ball but losing 31-28 in their home opener against divisional foe Buffalo Bills and covered the spread as a 5.5-point home dog.

The Jaguars hosted the Indianapolis Colts in Week 1 and shocked the NFL world with a solid 27-20 win and covered the spread as 7-point home dogs. They took to the road to play a tough Tennessee Titans team and lost 33-30 but covered the spread as 6.5-point road warriors. So, both teams through two weeks of action are playing at a higher level than in previous seasons.

How Much Better Are the Jaguars?

James Robinson started at RB for the Jaguars and gained 102 rushing yards on 16 attempts including a touchdown. He also was targeted four times, caught three passes for 18 yards. In fact, Robinson outgained the reigning NFL rushing leader Derrick Henry, who was contained to 84 rushing yards on 25 attempts.

Gardner Minshew II, the mustache, had a great game completing 30 of 45 pass attempts for 339 yards including three touchdowns. However, he did throw two interceptions and was sacked twice for a loss of 24 yards. WR Keelan Cole was tied with Chris Conley a team-high 7 targets. Cole caught 6 passes for 58 yards and a touchdown. Conley caught 4 passes for 48 yards. Jonnu Smith was the big playmaker catching 4 of 5 targets for a team-high 84 yards and two touchdowns.

So, no doubt the Jaguars are playing at a much higher level right now than in ant of the previous 5 seasons.
The Veteran Leadership of Ryan Fitzpatrick Not one week goes by that the Miami media does not mention the calming influence and command of the huddle that Fitzpatrick brings to the team. Isaiah Ford was a Week 13 call-up from the practice squad in Week 13 last year, he has benefitted the most from Fitzpatrick’s extreme knowledge of the game. Since Week 13 of last season, Ford has caught 30 passes on 44 targets gaining 325 yards and averaging a solid 7.4 yards-per-catch.

In last week’s loss to the Bills, Fitzpatrick completed 31 of 47 passes for 328 yards, two touchdowns, and no interceptions. All his metrics combined for an impressive 100.3 quarter-back-rating (QBR) against one of the better defensive units in the AFC. Ford was targeted more than DeVante Parker and Ford will steadily become an increasing part of the offensive game plan. A definite must-have on your DFS NFL team.

This betting system has earned a solid 86-50 ATS record good for 63% winning bets and a money-making 20% return-on-investment (ROI) spanning the past 15 seasons. The system instructs us to bet on teams in the first four weeks of the seasons facing a conference foe installed as dogs of 1.5 to 6 points and a team that won five or fewer games in the previous season.

The machine learning models project that the Dolphins will have more passing yards, will average 6.2 yards-per-play, and will have a higher YPPL ratio than the Jaguars. In past games when the Dolphins have met or exceeded these performance measures, they have earned a solid 21-10-1 ATS record good for 68% winning bets and a 28.5% ROI in games played over the last 15 seasons. Take the Miami Dolphins as a modest road dog. The best current price on the Dolphins is at +3 (+100) via FoxBet